This morning as I was plodding through 20 pages of The Education of Henry Adams, I came across this worthy sentence:

“Here, then, appeared in its fullest force, the practical difficulty in education which a mere student could never overcome; a difficulty not in theory, or knowledge, or even want of experience, but in the sheer chaos of human nature.”  (From chapter 10, “Political Morality”)

This is an amazing sentence in the midst of young Henry Adams diplomatic work, as secretary to his father, who as the American ambassador to Britain during the American Civil War Between the States.  Adams was grappling with the complexities of the views and expressions of the British cabinet.  That story, in itself, is quite complicated, but its general tenor is very familiar ground.  Anyone entering into politics needs to dwell upon Adams’ statement, and so does anyone entering into church work, business, and family life, or, simply stepping out the door onto the street.

There is a place for the learning of theories of history, sociology, psychology, and other aspects of human behavior.  Knowledge is indispensable, and I say that as a knowledge-peddler.  Then comes experience, which can only generally be obtained by…experience, although reading might supplement it.  Human nature is chaotic.  The story of the Fall is the story of such chaos.  Eve’s deception and Adam’s willingness to transgress God’s one rule were both chaotic acts, and the rest of history is simply a long fall down a flight of stairs.  The Cross, of course, is the reversal of the cause and effects of such chaos, but the ongoing need for growth in grace is the need for minimizing and ultimately eliminating chaos in human nature, beginning with ourselves.

The Library of America edition of Henry Adams’ writings.

As I said, the Adams’ sentence is a worthy aphorism, or original thought, worded memorably.  The book, The Education of Henry Adams, is deemed an American classic.  In a recent post highlighting American history and culture, I referenced Wilfred McClay’s “American Canon.”   It includes Adams’ book.  That is what motivated me to start reading it.  I am still less than 200 pages into a 500 page book.

At this point, if you asked me…ME…if The Education of Henry Adams is a really important book, a classic, an essential read about the American experience, I would have to remain silent.  If I were merely reading a book for delight, for relaxation, this one would have been returned to the shelf. But that is the point that needs to explored.

First, any book needs to be read in its entirety before any true judgment can be made.  Before the last page, the last paragraph, last sentence, last word, all you can have are impressions.  The impressions may be good or bad, the book may be engrossing or not, the style may be captivating or plodding, and the subject may be interesting or uninteresting.  By the way, I am referring to literary works.  With self-help books, histories and biographies (although these works, too, are artistic renderings), and reference works, dipping and cherry picking is just fine.  But you cannot simply read a portion of a novel, a stanza of a poem, or a sentence or chapter of a literary autobiography and justly give a pronouncement.  Nor can you view just a portion of a work of art or hear a measure of a symphony and give a just pronouncement.

All this boils down to this:  Be quiet and finish the book.

Second,  you can glean much from the impressions.  You don’t begin thinking when the book is finished; rather, you suspend final or complete judgments.  But you can note the fine word craft, the well developed character, the wit, the pithy sentences, and the quotable lines.    I like to either have a folded sheet of paper in the book or have a Moleskine notebook handy or both.  Some books I also mark, but some of the finer books, I leave untouched.  Like David, I am always looking for five smooth stones for battling Goliaths or to simply remember and enjoy.

Third, you must read communally.  The solitary life ended when Adam took a long nap after pondering the pairing in animal life and wondering why he alone was alone.  There was not a committee somewhere, or a government agency, or a poll among readers, or a gaggle of librarians, or a group of bookish folks gathered for coffee or tea who determined what books constitute classics.  Battling over the, as in THE, definitive list of greatest books is a fun sport, either as a spectator or participant.  But it is not a science or math class.

For some reason or another, and actually, for many reasons, certain books show up on almost every list and other books show up on many lists.  I love such lists so much that I even have a book or two that are made up of reading lists.  I almost never meet a book list I don’t like.  But lists are not infallible.

However, when the fog lifts and you see a title up there on this list and that, on the list of the great books or the essential books, on the 100 best, or the defining canons, then yield the right of way to the experts.  When reading the book, mutter to yourself or to an illiterate friend, “I don’t know what is so great about this book.”  Don’t you dare state it in class, or out loud, or on a blog, or to a frog in a bog.  Your dislike of a classic may be right, but most likely it is not.  Most likely, your rejection of a classic is a mental disorder. 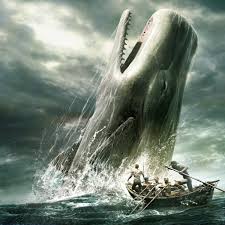 Case in point:  Moby Dick by Herman Melville.  Everyone knows it is a classic (except many of those who read it right after it was published).  It appears on the lists of great American books and it even gets to elbow its way into the European books.  (There is a school of thought that implies that the term “great American novel” is an oxymoron.)  The book starts well and really ends well.  (I wanted to say, “starts whale and ends whale.”)  The last 3 chapters are riveting adventure.  But the book is incredibly long and detailed and rambling.  Anyone thinking this is going to be a sea adventure on the order of Master and Commander  (starring Russell Crowe) or Gilligan’s Island finds themselves soon disappointed.

Any modern editor, with an eye toward sales, would have said, “Herman, great idea.  But shorten every sentence, every paragraph, and throw in a visit to an island with pretty women and have more whale attacks. ”  Then he would have added, “Let’s make this Ishmael a lot younger–maybe 13 in the first book.  Then let’s give this kid a few magical powers which have to conflict with Ahab’s magical powers.”  The next you know, Melville would have been cranking out a series of novels about a kid growing up with his friends, one ethnic and one female, and uttering juvenile platitudes about the world.  In the later novels, things could get a little more racy since people soon tire of “boy meets white whale” scenarios.

Fourth, when the book is finished, you are ready for two or three follow-up things.

1.  You are ready to listen to what the experts have to say.  Read some good critics and authorities.  Scan the web for a few short articles on the book.  Read the introduction.  Read Wikipedia.  Read from Louise Cowan and Os Guinness’ Invitation to the Classics, Thomas Foster’s Twenty Five Books that Shaped America, or any other source. Listen to a true teacher (some of whom can be found in classrooms) and to other engaged readers.

2.  You are ready to start expressing judgments on the book.  These judgments are still to be regarded as evolving, embryonic, impressionary, preliminary, and yearning for clarification.  If everyone agrees that it is a classic, and you missed it completely, stay quiet, very quiet.  Possibly, you need to check into a place that helps people with severe disorders.  Connect the scattered quotes and notes.  Step back and look at the whole.  Start asking what the author really was up to.

3.  Plot and plan a re-reading of the book.  You will not get to every book, but many will need to be re-read.  Somewhere, I read that Faulkner cannot be read, but only re-read.  That is so true of so many books.  I was not impressed with or convinced of the worth of The Iliad, The Great Gatsby, Light in August, The Last of the Mohicans, The Chronicles of Narnia, or All The King’s Men the first time I read those books.  (I was then taken to an institution.)  I made a dumb statement about Achilles in the presence of Professsor Glenn Arberry and a dumb statement about a poem to Louise Cowan.  Great literature fools us, tricks us, only shows hints.  Read a pop novelist (and I wish I were one) and the fun, adventure, plot, and characters are all plain to see as we whip through the book and toss it aside.  Read literature and you only see a tip of an iceberg, a hint of trail, a little smoke from a great blaze, and fleeting glimpse of the chaos of human nature.

Ten readings are, in my estimation, the goal for the essential books.  Think to yourself, how many times do you need to read Matthew’s Gospel, Paul’s Letter to the Romans, and David’s Psalms?  On a lesser note, can you emotionally understand George Jones singing “He Stopped Loving Her Today” after hearing it once, or twice?  Can you truly know the Smokey Mountains with one drive from Gatlinburg to Cherokee?

Unless you are a teacher or a speed reader (which contains its own destructive seeds), or a man or woman of leisure, not every book can get its ten readings.  Two might have to suffice.  Three would be nice.  Usually, the readings need to be spaced out.  Our minds, our theories, knowledge, experiences, and confrontations with human nature need time to grow.

2 thoughts on “Another Reading Primer from the Teacher”