Believe me. I really tried to specialize at different points in my career as a student, teacher, and reader. Admittedly, I should have completed a doctoral dissertation years ago on some topic like “Remnants of Mercantile Economic Thought in Jackson’s Veto of the Bank Bill.” But the problem was, and is, that I am too easily distracted, too often drawn away, too quickly ready to jump into something else.

For a long period of my life, I studied ante-bellum America and the War Between the States with a great deal of intensity and focus. I have rows of sagging bookshelves filled with accounts of battles, biographies of generals, and studies of various and sundry topics related to the war that divided America from 1861 to 1865.

Besides the books, I was a re-enactor for a short time. I served in the Third Arkansas re-enactment group and took part in a re-enactment battle or two. I collected Civil War era clothes, a gun and a sword, pictures, actual bullets, and all sorts of items related to the war. For a time, everyone who gave me a gift, gave me some sort of Civil War item. I received Civil War maps, a beautiful set of plates features Robert E. Lee and Stonewall Jackson, a Robert E. Lee stein, a Civil War chessboard, and books, often the coffee table variety. Every trip my family took involved, as much as possible, a visit to a battlefield or to a Southern plantation. My wife and I had a deal: For every battlefield visit, we would visit an antique store.

My wife recently asked why I tapered off on these interests, on what was an obsession. There are several reasons.

First, it is my nature. I get overwhelmingly consumed in something and then begin reading, studying, talking, and thinking about it non-stop. At some point, the energy and devotion peaks and I almost become normal. Almost normal, that is, until the next obsession takes command.

Second, in my school, I began the Humanities program. Classical Christian education as a whole redirected my thinking, and then the Humanities program necessitated some radical shifts in my labors. I had, almost against my will, to read Homer, Herodotus, and Virgil for Ancient World Humanities. I had, in spite of the difficulties, to read Eusebius, Augustine, Chaucer, Dante, and Mallory for the Medieval World Humanities. I was more willing to tackle Luther and Calvin, Dickens and Hugo, Tolstoy and Dostoevsky for the Modern World class. But those authors carried me far from the battlefields of the American War Between the States.
The fourth part of the Humanities Program is the American Story. But since the whole program is book dominated, it was necessary to focus lots of attention on the books and time periods other than the 1860s.

Fourth, Southern apologetics wore me out. I was initially drawn into the story of the War because of a growing awareness that the issues were not simply that of a freedom-motivated North seeking to liberate a slavery-dominated Southern culture dominated by the key players in Gone With the Wind. Books like I’ll Take My Stand by Twelve Southerners and The Southern Tradition at Bay by Richard Weaver alerted me to the more profound social, political, and cultural dimensions of the war. Theologians such as James Henley Thornwell and Robert Lewis Dabney alerted me to the theological angles to the war. Political thinkers such as Eugene Genovese helped me to see the complexities of the war.
So, I defended the South. I took my stand, waved the Stars and Bars, and cited the sources. If the South were a Lost Cause, so were many of the causes I stood for.
There is no simple “the North was right and righteous and the South was wicked” or “the North waged a Unitarian statist war against the freedom loving Christian South” scenario. There is much to defend about the old South, the Confederacy, and the South that survived. But it too was a flawed society, and the South remains so.
I gave a series of talks once at a conference. The first was titled “The Tragedy of the South’s Having Gone to War” and the second was titled “The Blessings of Southern Defeat.” These talks were no stab in the back to my heritage and the land of my birth. The South lost, and lost badly, a war that it should not have fought, but God graciously has blessed the South through the defeat. Those two talks gave a closure around what I had been seeking in my studies of all things Southern. 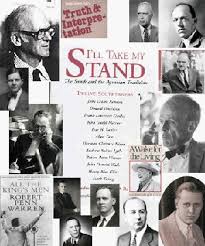 Fifth, studies of the Southern War for Independence led me into studies of Southern literature. The obsessive mode took over again. Blame the Agrarians, those twelve essayists who wrote I’ll Take My Stand. After reading their book carefully, I began collecting and reading everything they wrote and everything that had been written about them. So the poetry of Ransom, Tate, Warren, and Davidson captured me. The novels of Warren, Caroline Gordon, and Madison Jones pulled me in. The essays of Davidson, the literary criticism of Cleanth Brooks, and the literary sons and daughters of the Agrarian, Fugitive Poets, New Critics movements engulfed me.
And all Southern literature leads quickly to Flannery O’Connor and William Faulkner. So the war faded, the book collecting changed courses, and the interest level cooled.
But it was never a jilted romance. Rather, it was the old dilemma of world’s enough and time. Time itself while moving in a linear fashion to an appointed end also moves in cycles. The time came to return to studies of America before the War Between the States.

Two books directly and two books indirectly prompted the return. The first was a novel, The Little Shepherd of Kingdom Come by John Fox, Jr. My old paperback copy notes that over a million copies of this book has been sold. My old paperback copy, purchased at K-Mart back in 1974, cost $1.25. By and large, this novel is a forgotten book.

I read it in high school and, to the best of my recollection, enjoyed it. Perhaps I enjoyed it less on this reading, but understood it more. This is a story set in the politically divided state of Kentucky. It focuses on the social divisions as well. Mountain folk are pitted against the landed gentry. Even slaves despise the lowliness of the mountain people.

When the war begins, some of the characters in the book side with the North, others with the South. The key character Chad Bufford fits the beloved American pattern of the rags-to-riches story. Through pluck, strength, and Providence, he goes from being a poor, orphaned, and hopeless mountain boy to being taken in by a benefactor who was a long-lost distant kinsman.

Fox created a Dickens-like cast of characters that appear and re-appear in all sorts of incidences and coincidences. For whatever reasons, I often struggled to remember who the different characters were.
No wonder, however, that this novel, first published in 1898, should have sold a million plus copies. It presents a Gone With the Wind-type of American memory of the war. The divisions the war created extended into states, communities, and families, both in Kentucky and throughout much of the nation. The young man, Chad Bufford, is the hero-type that Americans loved. He is a type of Natty Bumpo, a type of cowboy, an unlikely hero who triumphs over the odds. Then there is romance, with the delicacy of a Victorian mindset. There is danger, conflict, pursuit and capture sequences, and historical circumstances. Being an older novel written by a Southern author (Fox was a Virginian), there are enough politically incorrect notions and words to ban John Fox, Jr. from almost any and every reading list in our time.

Novels give us angles on reality. They nurture some myths we want to believe. I can readily see why I would have liked this book in 1974. Every young boy would wish to be Chad Bufford, or Spiderman, or a sports hero. The novel reveals something of what people wanted to read and already thought in 1898. The pain of the War Between the States was repeatedly assuaged by novels that sought for a healing reconciliation. It is intriguing that this novel is so strongly Southern in its flavor and perspective, but Chad Bufford joins the Union army. Finally, the novelist was wise enough and American enough to know that sweet happy endings aren’t sweet or happy. The quest for life in America was not to be found in the attainments of the plantation-owning Southern gentlemen or in the simple pleasures of the mountain folk. And even those who were on the winning side of the War Between the States still lost much in the war, even if they retained their own lives.