How many biographies does a person need on John Calvin to just survive?  I am not talking about wealth and opulence, but mere survival.  As a middle class family, we are trying to get by on about a dozen Calvin biographies.  Thankfully, there are plenty of other books by and about Calvin that we have that enable us to get through all this.  I will comment briefly on the biographies listed below.  Some I have not read or not read completely.  Some I have read and then reread portions of repeatedly.

I think this was the first biography of Calvin that I ever owned.  It is a great study.  My copy is filled with highlighted portions.  Of course, much of Calvin’s life was spent in the study and in the pulpit, but there were so many factors and forces swirling around him that any biography has to be the life and times of Calvin.  Also, even though he wrote profusely, there are only bits and pieces about his personal life in his writings.  Thankfully, there are several volumes of his letters that have survived.  The Banner of Truth reprinted many of Calvin’s writings in The Tracts and Letters of John Calvin in seven volumes.  I can survive without this set only because I purchased a nice four volume set of Calvin’s letters back in 1978.

The author of The Genevan Reformation and the American Founding, David W. Hall, wrote A Heart Promptly Offered:  The Revolutionary Leadership of John Calvin for the “Leaders in Action” series.  That whole series consists of relatively short biographies of influential Christian leaders.  The books consist of a hundred or more pages on the life of the person, with additional sections on their character and leadership style.  These books are great reads for junior high and high school students.

The Legacy of John Calvin, also by David W. Hall, is an even shorter account of his life that was part of the P & R Publishers’ “Calvin 500 Series.”

Steven Lawson is a really fine writer.  This short book is a good glimpse of certain parts of Calvin’s life, particularly his labors in the pulpit.  Of course, Calvin’s life in the pulpit was basically his life.  While this book is biographical, it is mainly of interest to preachers.

I read this book some years back and thought it was an outstanding study.  Part of what is intriguing and amazing about Calvin is the impact of his work in revolutionizing all of society.  Geneva was a microcosm of his influence and the positive and negative impact of trying to bring a society into conformity with Christianity.  Wallace also did two other books on Calvin:  Calvin’s Doctrine of the Word and Sacrament and Calvin’s Doctrine of the Christian Life.  These are both useful studies and the second of them is an outline of Calvin’s Institutes.

This is a rather recent and a highly regarded biography of Calvin.

Williston Walker is an older historian.  His HIstory of the Christian Church is a valuable resource.  I picked up a copy of Walker’s biography of Calvin over 30 years ago. 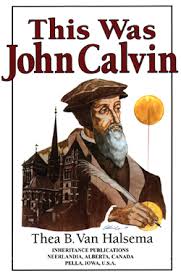 This Was John Calvin is an easy-to-read and yet really good biography of Calvin.  I am glad it is still in print.  If you are looking for a good biography for the kids, this is it.  But you will enjoy it too.

The biography of John Calvin by Bruce Gordon recently showed up on a list of great biographies as compiled by Christian historians.  I picked up a copy of this book at a library sale a year or so ago.

I have only read a portion of McGrath’s biography of Calvin.  I acquired it the last time that I was teaching Modern World Humanities, which begins with the Reformation.  I have read some other works by McGrath that I have enjoyed, including his recent biography of C. S. Lewis.

I acquired this book at some point at a really good price.  I have not used it, but I remember some favorable things said about it when it came out.  Here is the standard descriptive statement about the book:

This significant study explores the influences that shaped John Calvin up to the first edition of the Institutes. The author examines the tumultuous events that surrounded the young Calvin, the writers who shaped his thought, and questions concerning the nature of his conversion, his sense of call, and his views of the unity of the church. A historian thoroughly acquainted with both the primary and secondary literature, Ganoczy vividly re-creates the theological atmosphere of the early sixteenth century. Avoiding the polemics of a later era, he frames the issues in terms of Calvin’s concern for the reform of the whole church.

Theodore Beza was Calvin’s first biographer and his successor in Geneva.

I am embarassed to say that I do not have Theodore Beza’s biography of John Calvin.  I try to keep that quiet so as to not bring shame and social awkwardness to my children.  The benefit of such a book is that you get two Reformers for the price of one and you get both biography and some eye-witness understanding of Calvin’s times.

Any other Calvin biographies I have overlooked?  I was just surveying some of the publications by Banner of Truth Trust, along with some of the books that were published or reprinted in 2009 on the occasion of Calvin’s 500th birthday.  Bottom line is this:  I need a few more books.