In the New Testament, Christians were accused of turning the world upside down.  Actually, Christians are seeking to turn the world right-side up.  The faith is never simply and solely about going to heaven when we die.  Ideas have consequences (the oft quoted phrase) and an example of that is that Christian salvation spills out into all areas of life.  The person who is saved suddenly starts orienting his life around church.  He starts orienting his family around spiritual concerns.  He is a different man at work, in the neighborhood, in organizations, and in all areas of life.  At least, that is what should happen.  Christianity is a world-and-life changer.

At some point, the implications of the Christian faith turn to political matters.  If God is Sovereign, then the state cannot be sovereign.  If God’s Law is truth, then legislation contradicts Scripture to the detriment of society.  If man is basically sinful, then the standards of law and justice must take that into account.  If man, as in all people, are created in the image of God, then a certain sanctity and protection of life is essential.  Whether it is Psalm 2 or Romans 13 or a massive host of other passages, the Bible speaks often directly and often indirectly of matters pertaining to politics.

John Calvin and Martin Luther, and other Reformers, did not dabble in politics because they were interested in what was happening at the local precinct meeting.  They were interested in politics because political matters were life-and-death matters for themselves and their followers.  Calvin wrote lengthy and quite brilliant dedications in many of his books to key political leaders of his day.  There was a pressing need for political reform in their day.  Matters pertaining to salvation came first.  Then a host of other issues came pressing in:  church government, education, family life, vocational matters, and all sorts of political issues.  For that reason, Calvin devoted Chapter XX (20) of Book IV of The Institutes of the Christian Religion to political matters.

Abraham Kuyper devoted his third lecture in Lectures on Calvinism to politics.  The involvement of Calvinists in political matters is a deep and rich subject.  Reformed Christianity has a long and varied history of interaction in political movements.  The political science student who casually wonders while sitting in church what the connection is between the worship service and the civil social order suddenly discovers a huge mountain, in fact, a whole mountain range.

Douglas Kelly’s book The Emergence of Liberty in the Modern World:  The Influence of Calvin on Five Governments From the 16th through 18th Centuries is the study to realize the breadth of Calvinistic influence on political matters.  This book covers the following:

Huguenot France:  The French Protestants struggled for political freedom and ultimately lost in France.  Had France allowed the Huguenots to migrate to the areas of Canada that were then New France, the world would have been very different.

Knox’s Scotland:  A great story that includes the battles between John Knox and Mary Stuart, Queen of Scots, but also includes lots more.

Puritan England:  Another incredible and detailed story, summarized by Kelly.

Colonial America:  So much of our early history in this country is dominated by Calvinism.

One of a series of books published by P&R in commemoration of Calvin’s 500th Anniversary in 2009.

Along with David W. Hall’s book The Genevan Reformation and the American Founding, this book is quite useful in understanding the greater impact of Calvin on political matters.

The Constructive Revolutionary: John Calvin and His Socio-Economic Impact by Fred Graham is an older, but still really good book.  I used it in my own book Punic Wars and Culture Wars.  Graham wrote:

Luther felt God’s law primarily as the threat which drives us to God’s mercy, and that was the end of its Lutheran usefulness. For Calvin, the law had a further purpose, that of guiding the believer after he had accepted God’s mercy and forgiveness. This meant that the Calvinist was a more “driven” Christian—driven to live a life more in harmony with stern biblical morality, and thus driven to change society in this direction.

Politica is by Johannes Althusius (c. 1563 – August 12, 1638), a German jurist and Calvinist political philosopher. It is a political classic that had an impact on the Dutch revolt against the Spanish.  It has been reprinted in recent years by Liberty Fund. 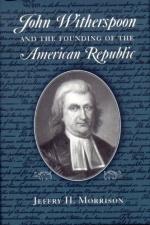 John Witherspoon was a preacher, a theologian, an educator, a political leader, a political philosopher, and a participant in revolutions in two countries.  When efforts to free Scotland from Hanoverian English control failed, Witherspoon migrated to the American colonies.  He taught at Princeton University, and his students became future leaders of the nation.  He was directly involved in the American War for Independence, and, in fact, he signed the Declaration of Independence.  He was the best American representative of Political Calvinism.  This biography, John Witherspoon and the Founding of the American Republic, by John H. Morrison, is a great study of this political leader.

Another Scot was Samuel Rutherford.  Besides being a great preacher, he was also involved in politics.  Lex, Rex, which means Law King, was a great statement of the right to revolt against tyrants.  Is it any wonder that wicked kings like James I of Scotland did not like Samuel Rutherford.  This too is a Calvinist political classic.

Vindiciae Contra Tyrannos, which was translated as Defense of Liberty Against Tyrants, is not known.  Outside of politically conservative Calvinistic circles, the book itself tends not to be known.  But John Adams claimed that this was one of the most influential books in America on the eve of revolution.  It is yet another thoroughly Calvinistic political work on the topic of revolution.

For years now, R. J. Rushdoony has taken lots of hits for his many different controversial theological and political positions.  He, too, was a Calvinist political philosopher.  This Independent Republic was one of the first Calvinistic books I read.  I was not quite a Calvinist, but as Andrew Sandlin said, the Calvinist intellectual like Rushdoony “tractor beamed us into the Reformed faith.”  It was Rushdoony who first made me aware of the Junius Brutus book mentioned above and of the role of John Witherspoon.  Whether someone likes Christian Reconstruction or not, anyone interested in American history and in the impact of Calvinism on history should read this book, along with other works of Rushdoony, including The Nature of the American System,  The Politics of Guilt and Pity, and The Institutes of Biblical Law.

A relatively recent book is Politics Reformed:  The Anglo-American Legacy of Covenant Theology by Glenn Moots.  The author states, “For centuries, theology advanced the discussion of political theory more than did the Great Books.”  And he writes, “Reformed theology was more familiar to Europeans and Americans than the works of Spinoza, Hobbes, or Locke, and its doctrines had enormous political import.”  This is good stuff.  This book, published by the University of Missouri Press, is a gem.

The works of Dutch Christian philosopher Herman Dooyeweerd are now being reprinted at affordable prices.  This short work, which became available in the United States back in the early 1960s, is titled The Christian Idea of the State.  Dooyeweerd built his political views, in large part, upon the work of other Dutch Christians such as Abraham Kuyper and Groen van Prinsterer.  They are all coming out of the rich traditions of the Calvinistic and Reformed theology of the Reformation.

A Christian Manifesto by Francis Schaeffer caused lots of controversy for Schaeffer and politically conservative Christians back around 1980 when it first came out.  Schaeffer’s son Franky is still spastic about it–insanely so.  Although Schaeffer borrowed heavily from portions of R. J. Rushdoony’s writing and thinking, he never footnoted him.  There were and are gaps in Schaeffer’s works and writings.  But Schaeffer did several important things in this political tract.  He called upon Christians to get politically involved in matters pertaining to abortion.  And, he called attention to the Calvinist political tradition, and in particular to that book mentioned above–Lex Rex.

One thought on “Reformation Month: Day 21”