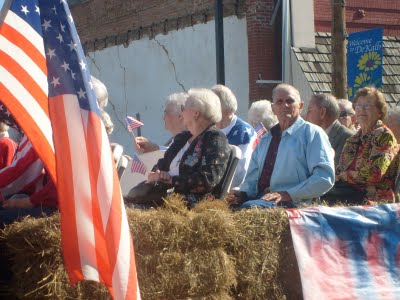 Joe Mac House, my Dad, in a parade honoring Veterans in DeKalb, Texas in 2009.

God did not make me to be a soldier.  It has been a blessing to this country that it never called me to serve.  But I have had an incredible interest in America’s military history for years, along with the opportunity to teach my students about the wars in our nation’s history.  I found the duties and devotion of soldiers fascinating when I was a young teacher.  As time goes by, I find the accounts of what soldiers have done to be beyond my comprehension.  I love and admire what the American military has done through the years.

Those unsure and slightly trained Minutemen who stood there at Lexington back in April of 1775, along with their brothers-in-arms who fired the legendary “shot heard round the world,” began a tradition.  As a student of history, I continue to grow in my admiration of the perseverance of the American Patriots who hit and retreated, hit and retreated, and struggled to simply survive the cold and hunger for the eight long years of our War for Independence.  The War of 1812 was not the easiest of wars to justify, but American soldiers did their duty.  We still remember them in the words of Francis Scott Key’s poem (and our national anthem) that proclaims “And the rocket’s red glare, the bombs bursting in air,
Gave proof through the night that our flag was still there.”

Those men who fought together in Mexico at such forgotten places as Buena Vista and Chapultepec showed incredible bravery and the strength of the American way of war. Sadly, comrades in arms in that war were on opposite sides in the War Between the States.  Most of my family and my heritage and many of my sympathies are for the Confederate Army, but the sheer bravery and guts shown by men on both sides leaves me stunned.

I admire the firey zeal of those who charged up San Juan Hill with Col. Roosevelt in the Spanish-American War.  World War I will always be defined for me by the bravery, Christian character, and southern markmanship of Alvin York and by the poetry of American poet Alan Seeger and of the Canadian soldier John McCrae, and others.

My father-in-law, William Kemp, and my late Uncle Hubert Moles both served in Korea.  My school years were during those dreaded years of the Vietnam War.  Since that time, I have watched as our country has fought in places such as Grenada, Iraq, Somalia, Kosovo, and Afghanistan. I have had former students in many of those places.

All of that being said, I am especially interested in World War II.  Today, in theology class, I read Randall Jarrell’s short gripping poem “Death of a Ball Turret Gunner.”   The poem is powerful by itself, but it means more to me since I have come to realize a great blessing of God’s providence.  My Dad, pictured above, was being trained in the army air corps as a ball turret gunner.  Since he is a fairly small man, he could have fit in the tiny, highly exposed capsule where ball turret gunners protected the bombers from enemy aircraft. The survival rate of such a task was low. (According to one source, “The life expectancy of a B17 ball turret gunner was less than that of the other aircrew for several reasons.”) Again, you are stuck in a small capsule that is attached underneath the plane and is highly exposed to freezing winds and enemy air fire.  If the airplane had any trouble landing, the ball turret gunner was usually sacrificed.

Then, while in basic training, my Dad received the only wound he ever got in the war.  He broke his leg playing soccer.  That ended his gunner training.  He was then transferred to another school where he learned to be an electrical mechanic on cargo planes.

Joe Mac House served in North Africa, meaning Libya, Tunisia, and Egypt.  He was also stationed in Iran, or as it was called then, Persia, and for a time was in India.  He worked day and night keeping the transport planes running.  He was not in the direct lines of fire, but some of the landings and take-offs and locations were incredibly dangerous.

This was supposed to be a blog about books on World War II and other American wars. I am probably only able to write that next blog because of that turn of “bad luck” on that soccer field back around 1943.