Walker Percy once told his friend, Shelby Foote, that he was writing the American Iliad.  He was referring to Foote’s monumental three volume history of the Civil War, titled simply The Civil War.  Foote’s incredible narrative style wove its way through hundreds of battles, across miles and miles of the country, and across four years of war, twenty years of writing, and a couple of pages of text.  But Foote’s Civil War was not the American Iliad, nor are any of the many, many powerful histories of that war.

Some of the greatest books on the War Between the States, a name I prefer over Civil War, have been fiction.  Of course, we have to begin by understanding that fiction at its best is not fictional.  Rather, it is true.  Or at least, fiction has a way of getting to the truth that is quite revealing of the human situation.  Fiction can probe in areas and make pronouncements that non-fiction can only envy.  When the historian or biographer probes the subconscious, the underlying motive, the subjective, it often reveals more about the author than the subject.

Much could be said about Civil War fiction.  I know because tonight I picked up a book out of the study that I have not read from in years.  There was a time when my obsession with the War itself morphed into an obsession with Southern literature.  I am not a person with hobbies, only obsessions.  I see them altered through the years, but never completely overcome, thankfully.

The book is Classics of Civil War Fiction, edited by David Madden and Peggy Bach.  It was published by University Press of Mississippi, one of my favorite university presses.  This book consists of more than a dozen selections and essays.  Without listing the books in this book, I will just say that I have only read a few of the selections they highlight and several of them are totally unfamiliar to me.  But, the book has a great nearly 20 page introduction to the subject and a interesting list of bibliography containing novels, stories, poems, and plays from 1852 to 1949.  As the editors point out, a surprisingly small amount of literary criticism and attention has been devoted to Civil War fiction.

My current interest in the topic stems from recent reading assignments inflicted upon my poor captives in junior high American history and high school Humanities:  The American Story.  I will, in my usual fashion, list books that I have read and liked and comment with what I hope is lucid brevity.

1.  The Killer Angels by Michael Shaara.

Take care that you don’t read The Killer Angels as a historical narrative.  It does a great job of capturing the history of the battle of Gettysburg and many of the key historical figures, but this novel only incidentally covers the visible, outward war.  It is the internal conflicts that propels this book along.  The Killer Angels very closely follows many of the patterns of Homer’s Iliad.  And, whereas the chief battle in The Iliad centers around when “first there stood in division of conflict” Achilles and Agamemnon, in this novel, the conflict is between Generals Longstreet and Lee.  I love this novel and have taught through it several times, and I also argue with it at many points.  I also think the movie, titled Gettyburg, although lacking the internal depth of the book, was well done.

Michael Shaara’s son, Jeff, wrote both a prequel and sequel to The Killer Angels.  The prequel was titled Gods and Generals and it covers the earlier years of the war prior to Gettysburg in 1863.  The sequel, The Last Full Measure, covers the closing years of the war.  I enjoyed reading both of these books, but did not find the fictional element as strongly convincing as the elder Shaara’s book.  Jeff Shaara has gone on to write an incredible number of fictionalized histories of American wars.

2.  Across Five Aprils by Irene Hunt.

I read this book last December for the first time.  I also used it in class for the first time.  It is written for young readers and is a marvelous story.  This is really a fun read.  Set in southern Illinois and focused on a young boy named Jethro who witnesses the coming of the war.  His brothers and teacher and mentor all go off to war.  One brother joins the Confederate Army, while the others side with the north.  As the war progresses, Jethro learns of the battles and rising and falling of military leaders.  This book is a good teaching tool about the war, but also a really good story.

I read Nashville 1864 by Madison Jones at least 10 years ago.  This is another novel featuring a young boy, who in this case witnesses the disastrous Battle of Nashville, Tennessee.  The novel is a short one, but I remember really liking it.  Madison Jones is a Southern author I really need to read more of.

If I have trouble remembering the previous book, I have even more remembering this book.  Shelby Foote was an accomplished Southern writer with the voice and manners and style of a true Southern gentleman.  He was also a friend to William Faulkner.  This is another short novel and it is set in the disastrous battle of Shiloh in 1862.  One should generally expect a dire and dreary tone to books by Southerners about the War.

Reading Cold Mountain by Charles Frazier in December of 1997 was my first and only experience of reading a best seller while it was on the charts.  This is a beautiful and lyrical book.  In so many ways, it is a recasting of Homer’s Odyssey.  A Confederate soldier, who is disillusioned with the war, begins his long journey home across Virginia.  Meanwhile, his fiance undergoes a transformation as she learns how to farm, grow and store food, and survive.  Both main characters are learning the world around them through their experiences.  I have never recovered from the heartbreak this book gave me.

6.  The Red Badge of Courage by Stephen Crane 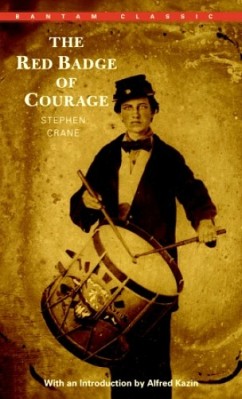 Of course, Crane’s novel is a classic.  Although some have identified the battle in the book as the northern defeat at Chancellorsville, the book leaves the exact details vague.  The ever amazing fact is that Crane had never witnessed war.  This book blows the whole theory that writers should stick to what they actually know.  The story is powerful, but the novel can easily be read too lightly.  This is not a story of courage, honor, and valiant young men in battle.  It is a study of the emotional and psychological impact of war and life experiences.  It could have been set in any time, any war, but it does reflect some of the story of the Civil War.

7.  The Fathers by Alan Tate

Alan Tate was a master poet, a brilliant literary critic and essayist, an Agrarian, a Fugitive Poet, a pivotal figure among the New Critics, a literary professor, and in this one case, a novelist.  This book is rarely noticed, but was highly acclaimed.  For a true sense of the Southerness of Alan Tate, one would do well to read his biographies of Stonewall Jackson and Jefferson Davis.

8.  Guns of the South by Harry Turtledove

Somewhere around 1997, I read a used paperback copy of Guns of the South by Harry Turtledove.  This kind of alternative history, fantasy-type reading, is not my forte.  Nevertheless, I enjoyed the book.  It involves a time machine that enables some South Africans to go back in time and aid the Confederacy with modern weaponry.  This is fun and one could wish for such changes in history on occasion.

9.  The Widow of the South by Robert Hicks

I cannot say much about this book because I just started reading it.  Last summer, we had a wonderful short trip to Franklin, Tennessee (one of the greatest places in the world).  We visited the historic Carnton Plantation which was converted into a hospital during the awful battle of Franklin.  Dark stains are still on the floor where surgeries were performed.  Near the house is a cemetary containing quite a few remains of Southern soldiers.  This story, the first novel of Franklin author Robert Hicks, is centered around that story.

10.  None Shall Look Back by Caroline Gordon

Caroline Gordon was an outstanding Southern author and she was the wife of Alan Tate (for a time).  This book, None Shall Look Back, is absolutely one of the best novels I ever read.  It is deeply Southern.  Ms. Gordon writes about war with the skill of a Homer or Douglas Southall Freeman, and she writes of love and romance like Jane Austen.  This book contains both war and love.  I never knew of Gordon until some years after I finished college.  What a loss.

11.  The Unvanquished by William Faulkner

This is, without question, my favorite novel on the War Between the States and my favorite Faulkner work.  I have read the book around 10 times and cannot wait to get started on it soon with the Humanities Class.  I think it gives a powerful view of the struggles on the homefront, the terrors of the war in a local region, and the Reconstruction period.  In my late blog of yesteryear, I discussed the novel and Faulkner HERE and I have the text of a paper I once wrote and read at a literary gathering in Dallas which is about The Unvanquished, which can be found HERE.  Various other Faulkner works deal directly or indirectly with the War Between the States and its aftermath.  There is no understanding of Faulkner’s world apart from the War.  Two major works that deal with that war are Absalom, Absalom, a novel, and “Mountain Victory,” a short story.

The book pictured below, Reading Faulkner: The Unvanquished, is part of an incredibly helpful series of books published by the University Press of Mississippi, which explain and comment on Faulkner’s Southern language and literary twists and turns.

There are lots more fictional works on the war.  I know that I have left off the defining piece of both Southern fiction and cinematography, Gone With the Wind by Margaret Mitchell.  Alas, although I have watched the movie several times and liked it (all except for the first watching back when I was in 8th grade), I have not read the book.  But I will try soon to remedy that moral failing.

3 thoughts on “The Great American Novel and the Late Unpleasantness”