In 1988,  I was well established as a history teacher at Genoa School.  It was a good year, and I was progressing in my efforts to teach history.  What I did not realize that year was that the Christian theologian and scholar Carl F. H. Henry had written an essay with me in mind.  Now, he did not know me and I was only vaguely aware of him.  But the essay, “Educating for Intellectual Excellence” was written with people like me in mind. 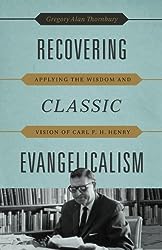 First of all, my awareness and appreciation of Carl F. H. Henry increased exponentially last year when I read Recovering Classical Evangelicalism: Applying the Wisdom and Vision of Carl F. H. Henry by Gregory Alan Thornbury.  I now have Henry massive 6 volume work God, Revelation, and Authority.  Therefore,  someday when I grow up, I will be well read and grounded in Henry’s thought (and Van Til’s, Dooyeweerd’s, Frame’s, Grudem’s, and Flannery O’Connor’s).

Second, the essay appears in Twilight of a Great Civilization:  The Drift Toward Neo-Paganism by Henry.  This collection of essays was published in 1988.  I bought my copy from my favorite bookseller David Leach, whose current stock can be found here.  Being essays that are now nearly 30 years old, Henry makes points that are often dated.  (So do Calvin and Augustine!)  Nevertheless, the book still packs a lot of punch.

When Henry described what should be a key foundational part of education, I rejoiced in God’s providence.  For 18 years now, I have labored in a classical Christian school, Veritas Academy in Texarkana.  We are seeking to do the very things that Henry recommended.

What Henry writes about a college is what we are seeking to do.  He is encouraging an engagement in the Great Books curriculum.  Of course, a school that is classical simply must read classics, and a school that is Christian simply must engage in Christian filtering and thinking through the classics. We read such works in our Humanities classes in the high school, the Omnibus class in junior high, and in the other courses we have. If our children are being grounded in good books and good thinking in the elementary and secondary years, then college education will enable them to soar.

“The first course–perhaps a full-time freshman module–might well be Plato’s Republic, which interacts with materialism from a supernatural stance, deals with the sad break-up of Greek democracy, discusses the ideal content of education, wrestles with the nature of truth and the good, and interacts with much else that is also of critical contemporary concern.” (p. 95)

Our use of Plato’s Republic is mainly in the Ancient World Humanities class, but just this week, we read from his Allegory of the Cave in our apologetics class.  Plato, his teacher Socrates, and his student Aristotle were truly brilliant at so many points.  They raised questions that still vex and perplex people.  Granted, their worldview was wrong, their presuppositions falsely based, and their conclusions were unreliable.  But they hit upon essential ideas.  They were blind men groping for God.  They were, at many points, painfully honest.  They will sharpen the mind of good students.

“The next course might well take the Bible as its basic book in revelatory confrontation of both philosophical idealism and naturalism. An educational program alert to presuppositions and to the importance of logical tests could then well find its climax in a senior required course on Biblical theism and Christian ethics.  That comprehensive overview is much more important than majoring only in changing space-time relativities that need constantly to be revised.” (p. 95)

Not only do we have a course for upper high schoolers on Biblical theism and Christian ethics (we call it Theology and Apologetics class), but we seek to alert students to presuppositions all along the way.  This is what is commonly called a Christian worldview.  It has reference to the underlying ideas in society and thought.  And to break through some of Henry’s more difficult language, we believe that a solid presuppositional and theological view of the world enables us to both analyze past ideas and see through current issues.

Henry closes the essay by questioning the objection that not every student needs to be a theologian or philosopher.  In classical Christian schools, we are sometimes accused of thinking that way, but more often accused of training students primarily in literature.  Henry makes some great points regarding the nature of education.

“The leaders of the Protestant Reformation were all university-trained, and they knew the Biblical languages and the Bible’s content and its implications. In that great turning-time the laity knew more about theology than do many pastors today, armed as they may be with even a Doctor of Ministries degree.  Evangelical leaders often speak enthusiastically of the prospect or hope of a new Reformation. If they intend this seriously, they must face up to its educational demands.” (p. 96)

I teach about the Protestant Reformation, the American Great Awakening, the work of the early Church Fathers, and the impact of Dutch Neo-Calvinist thinkers.  I long for and pray for Reformation and Revival in this land and throughout the nation.  But such work is discouraging.  God knows how often I am discouraged.  That is why the Holy Spirit moved Carl F. H. Henry to write what he did in 1988 and what God directed me toward reading it in 2014.

Let’s read and hear and think on Henry’s comments again:

“Evangelical leaders often speak enthusiastically of the prospect or hope of a new Reformation. If they intend this seriously, they must face up to its educational demands.”