I love summer reading and the mythical ideas and imagination of summer reading.  Sad to say, most of my reading in the summer is done in the same rooms, chairs, and bed as my reading during the other parts of the year.  No pounding of the suft, no mountain vistas, no calm misty lake, and no quaint little cottage nestled on the edge of a village can be found in my life.  Try as I might to find or achieve such environs, I am here at home.  Nevertheless, I do enjoy the freedom and extra reading time that summer affords.

I have no set plan or list to read.  In the past, I would make such lists and then fail to follow them.  I will give a few mentions of what has been read  or started of late.  I will focus mainly on some of the longer books.  A few works will be blogged about later.

Several books that I have already finished or am pressing on with now are books that were started in the past.  Some were started over a year ago.  I read for a time and then the particular books got by-passed by other books, interests, or necessities.  I rarely start a book over; instead, I pick up where I left off.

Coolidge by Amity Shlaes, which I recently blogged, was started last year and finished this year.  It was a good coda for my year of teaching American history.  I also finished reading Another Sort of Education by James V. Schall, but that book deserves a lengthy review.

Last summer, in anticipation of teaching American history and literature, I began reading Henry Adams’ autobiographical The Education of Henry Adams.  This is a lengthy and unusual book.  Often quoted, it is considered a defining classic in American literature and history, and its author was the grandson and great-grandson of the second and sixth Presidents.  I will try to develop some thoughts about the book after I finish it.  The end is in sight however.

Last October I began reading D. G. Hart’s Calvinism: A History.  I enjoyed what I read, but did not get far into the book.  Last week, I picked it back up and am now plodding along.  This is a very detailed and scholarly study.  It goes beyond the cursory summary of Reformation history.  I know now why I could not get into it enough last fall.  It takes some energy and concentration.  I also find it will be helpful to me as I approach this year’s Humanities course, which is the Modern World.  As the term is used in history, the Modern World began around 1500.  When I get Hart’s book finished, I hope to read Presbyterian and Reformed Churches: A Global History by James E. McGoldrick.

On the other end of the Modern History period, I am now into reading A Patriot’s History of the Modern World:  From America’s Exceptional Ascent to the Atomic Bomb, 1898-1945 by Larry Schweikart and Dave Dougherty.  I started this book a few months ago when I was covering the Spanish-American War.  It is a good and lively historical survey from a politically conservative perspective. (I did recently see a second volume of this work that covers more recent history.) 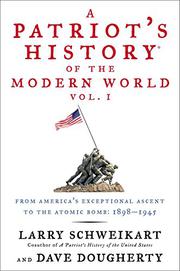 I am now officially reading and into Ayn Rand’s hefty, bulky, and influential novel Atlas Shrugged.  I gave this book to my upcoming government students as a summer reading assignment.  The particular paperback edition that I have is hampered by small print, but I am pressing on.  There are many writers I read where I find myself admiring and even envying their writing style.  In this case, I find Ayn Rand’s writing style and descriptions appalling.  Some of her sentences hurt me physically.  In her defense, she was a Russian who acquired her English mainly after coming to the United States.  On the other hand, one wonders how her writing survived editing.

Ayn Rand’s writing continually exalts a certain kind of independent, strong, unflinching, self-consciously directed character.  Her heroes and heroines are the personifications of her Objectivist philosophy.  The array of other characters are the straw men of philosophies and ideas that she despised.  Ayn Rand was brilliant and she was crazy.  She had a great love for individual initiative, free enterprise, business success, and limited government.  She despised any institutions or ideas that either controlled the individual or dictated how they should think, feel, and act.  She extolled selfishness as a virtue and excoriated humanitarianism as a vice.
Many conservative and libertarian writers and thinkers have been influenced by her.  Her ideas have recurring popularity among young thinkers.  There are several politicians who credit Rand for influencing their thought.  Both Ron Paul and Paul Ryan read and appreciated Ayn Rand.  The younger Paul, Senator Rand Paul, also appreciates her, and he is not, contrary to appearances, named after her.

Ayn Rand was a great defender of freedom.  Her hatred of Communism, Fascism, Socialism, group-think, and government interventionism empowered her writings.  She also hated Christianity and religion in general.  In what would surely irritate Ms. Rand, I have read of several people who profess to have been changed by reading Atlas Shrugged and the Bible.   She was quirky, weird, tyranical in her domination of others, immoral, inconsistent, and frequently stupid in her assessments of people and ideas.  Amidst the atrocious prose and the overly simplistic characters, there are some great insights in her writings.
So far, I am enjoying Atlas Shrugged.  Keep in mind, that this is a love story (so far) between a woman and a railroad company (paralleled with a love story between a man and his steel alloy).  There is a place for a teacher reading the books that influence people.  There is a place for a student reading the books (even misguided ones) that continue to impact thought and discussion.
One further note:  Prior to his election as President, Ayn Rand said that she would rather die than see Ronald Reagan elected President.  She thought that Reagan was a moral monster.   Happily, Reagan was elected in 1980 and Ayn Rand died in 1982.