A Tale of Two Cities is also the story of two women. The book is a continuous weave of contrasts. “It was the best of times, it was the worst of times.” The calm and peace found in London contrasts with the turmoil and revolution seething in Paris. The nobility and deportment of Charles Darnay contrasts with the intemperance and wasted life of Sidney Carton. The selfless labors of banker Jarvis Lorry contrasts with the scheming ruthlessness of Ernest Defarge. The law and order of the English courtroom, as highlighted in the last article, contrasts with the cruelly efficient injustices of the French courtroom. One of the greatest contrasts, however in the book is that between the two key women–Lucie Manette and Therese Defarge.

There is a religious symbolism that pervades all literature. It is very obvious in the self-consciously Christian writings, such as John Bunyan’s Pilgrim Progress, Edmund Spenser’s Fairie Queene, or C. S. Lewis’ Chronicles of Narnia. But themes of sin and redemption, communion, forgiveness, providence, conversion from one path to another, baptism and cleansing, and the sanctuary of the church pervade all stories. The writer may have been nominally Christian, anti-Christian, of a religion other than Christianity, or indifferent to the Christian faith. But the contours of the human landscape make religious themes inevitable. 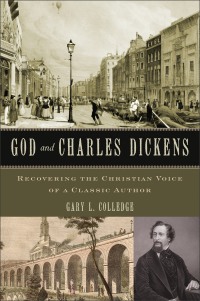 Charles Dickens was a writer who was a Christian. I avoided saying that he was a Christian writer, for he did not seek to write a genre of specifically Christian-themed stories. In the past, I would have been less assertive of Dickens’ commitment to the Christian faith, but I have found Gary L. Colledge’s God and Charles Dickens: Recovering the Christian Voice of a Classical Author convincing and enjoyable. So I stand with Dr. Colledge along with Russian authors Leo Tolstoy and Fyodor Dostoevsky who referred to Dickens as “that great Christian writer.” That being said, the topic of Dickens’ commitment to Christianity, especially as evidenced in his writings, is another topic and one that Colledge’s book amply covers.
Women in literature often portray to role of the church. Women protect, heal, nurture, give comfort to, and provide solace to other characters who are suffering from sin and its effects. While there are certainly plenty of good male nurses and teachers, there is still a powerful sense that women often take on these roles with greater compassion and mercy than men.

People find salvation in the church. A careful Biblical Christian often hesitates to utter that sentence. It might imply and it has led to belief and ideas that have given “the Church” a role that it does not play. The church is not Jesus Christ; it does not redeem lost sinners; membership and identification with it does not confer salvation. There are, no doubt, far too many people without Christ whose names adorn church rolls. But people find salvation in the church. In Psalm 73, the psalm singer bemoaned the prosperity of the wicked. He was on a slippery slope until, as he says in verse 17, “I went into the sanctuary of God.”

The wayward path, the confused mind, the wandering soul, the restless heart, the sin laden conscience, and the broken publican all find the way back to God in the sanctuary. The church is, in the Christian cosmos, the bride of Christ. The wife in marriage is symbolically related to the church, just as analogically the husband is related to Christ. Women, then, represent the role of the church in literature.

One additional matter regarding Dickens as a writer. Charles Dickens was writing during the early to mid-1800s. This was the Victorian Era, and the literature of the time was heavily influenced by the manners and mores of Romanticism. Dickens could be amazingly accurate in describing human ills. Many Dickens’ characters display complexity and ambiguity. Dickens revealed the heart and minds of men of all types. But he wrote before the advent of those schools of literature termed Realists and before the invasion of psychology into writing. Dickens is not Freudian or pre-Freudian. His tendency to be paint words and characters with strong contrasts rather than indistinguishable muted tones. Good guys are really good. Villains are really bad.  Plot lines coincide and resolve by the end of the novel.  People may not live happily ever after, but the issues are resolved.

Also, Dickens was a man, a male. Surprised at that insight? Well, Dickens was surprised when he read a novel that was written by a woman. The author of the novel was George Eliot. While reading the book, Dickens realized that George wasn’t really George. George was she, not he. The reason was because of the way female characters were portrayed. Dickens had a great ability to put himself into the thoughts of his characters, but he knew what all men know. That is, we guys don’t really understand women. Hence Dickens the Romantic portrayed heroes and villains, and when those characters were females, they were perhaps even more exaggerated in character.

The result is Lucie Manette is perfect. The boy who reads this book, falls in love with Lucie (“I love Lucie”), and determines to find her exact incarnation among the girls in his life will die a bachelor. The only slight fault that Lucie has is fainting on occasion due to shocking news. Since she lived in a time where fainting couches were common furniture, that was no fault.

It is no wonder that the three younger men all fall for Lucie. Portly Lawyer Stryver decided to do her the favor of marrying her. Sidney Carton was strongly smitten, although painfully aware of his own faults. Charles Darnay, who was blessed with near perfection himself, was the perfect match. One even supposes that good old Jarvis Lorry fancied Lucie. He was, as pointed out in the book, “born a bachelor.” But he did imagine how nice it would have been to have had a long wedded life with someone like Lucie. I admit that if I were a literary character who just happened to walk into a chapter of A Tale of Two Cities, I would have been hoping that Lucie would notice me.

Lucie has a purity and grace in all that she does. She is one who restores her father after his imprisonment. She provides the home life and love that sustains Charles Darnay. She is the moral compass for Sidney Carton who determines early on that he will, when and if necessary, do anything for her and anyone she loves. She is no stranger to adversity, for her father and husband both undergo imprisonments. Her son dies, and her life is disrupted several times along the way. Like the church, through trials and tribulations, she endures and is a light to those in darkness.

Madame Defarge also had a troubled life. Late in the book, we learn of some of the troubles her family endured. She witnessed the miseries of the French people around her and knew firsthand of the coldhearted indifference of the French aristocracy. Whereas Lucie was a devoted Christian, seen more in actions than rituals, Therese Defarge held to a revolutionary faith. While not all atheists are bad, mean people, there are those whose atheism (as well as those of other faiths) leads to unrestrained evil.

The French Revolution unlocked some forces and inhibitions that far exceeded any of the atheistic beliefs of Voltaire or the philosophical tenets of Rousseau. This something that spawned the French Revolution was horrible. James A. Billington devoted a lengthy and scholarly book to this topic in his work Fire in the Minds of Men, aptly subtitled The Origins of a Revolutionary Faith. Groen van Prinsterer devoted a series of lectures to the topic of Revolution and Unbelief. Something in the human psyche was unleashed in 1789 that spun out across Europe in revolutionary violence that continues to this day.

Dickens repeated the slogan, the mission statement, the ground motive of the French Revolution (and its children) in the saying, “Liberty, equality, fraternity, or death.” There was no longer a presumption of innocence until proved guilty if someone fit into the slippery charge of being an enemy of “the People.” From Robespierre to Lenin and Stalin, from Mao Tse-Tung to Pol Pot, from Al Queda to ISIS, revolutions have proven to be insatiable for blood.

Ironically, Madame Defarge is always knitting. The image of the good wife knitting is comforting one. Knitting is a family directed activity. It is a constant activity. It is ministry to others in need. It is motherly. But when asked, Madame Defarge says she is knitting shrouds. She is inscribing the names and deeds of all she observes into these knitted items. She is storing up accusations and charges. The knitting is a record of her hatred and vengeance. Interestingly, her female friend and co-revolutionary is called “the Vengeance.”

After the Bastille is stormed, the somewhat restrained Madame Defarge unveils her true personality. Pulling a knife out of her cloak, she personally beheads a fallen guard. There is, from that point on, no restraint, no conscience, no moral scruples, no sense of law and order in this woman.

If it were not for the history of the twentieth century and the evening news coming out of the Middle East, we might think that Dickens overstated the case. But Madame Defarge lives. With none of the nurturing, teaching, or mothering instincts, this woman, devoid of even common grace, Madame Defarge can either kill her enemies herself or amuse herself watching the daily executions enacted by another evil woman, Madame Guillotine.