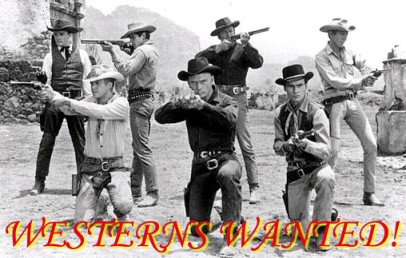 I have been diagnosed with Library A.D.D.   I am always wanting to add to my library, add to my reading, add to my interests.  I have a few specialties, but my attempts at focus are distracted by sideroads and vistas and unexplored horizons.  The end result is always more books accumulated, more books started, and more books wanted.

Although my reading preferences are more rooted in things Southern, I have an interest in the American west and in that broad field of books and movies and television shows called Westerns.  I am out of place in that world.  I don’t live on a ranch, ride a horse, battle the elements of wind and weather, herd cattle, fight off outlaws, pack a pistol, or any of the other things that characterize our understanding of the west.  I do have a cowboy hat which I enjoy wearing in the winter, but I always feel that I don’t fit the part.  I am the guy sent over from central casting that should be the telegraph operator in a western movie rather than the cowboy, outlaw, or hired gun.

I have had an increasing interest over the last few years in western movies, T.V. series, and novels.  My interest starts with the man I credit for developing the American western, James Fenimore Cooper.  It is odd, but the first westerns, like The Deerslayer and The Last of the Mohicans take place in upstate New York.  Only later in life does Natty Bumpo and his Indian companion Chingachgook head westward.  Natty Bumpo dies in The Prairie, the last book in the chronological order of the Leatherstocking Tales.

I have enjoyed reading a couple of other westerns in the last few years, such as True Grit by Charles Portis and Boone’s Lick by Larry McMurtry. In terms of television series, my favorites are Wanted Dead or Alive and Rawhide.  Favorite movies include John Wayne in Red River and The Cowboys, both movie versions of True Grit, and Open Range with Robert Duval and Kevin Costner.

All this brings me around a book I just received from the University of Oklahoma Press.  The book is The Wister Trace: Assaying Classic Western Fiction by Loren Estleman.  Originally published in 1987, this is a new and expanded edition of the book.

There is a defining quote by Brian Garfield at the beginning of the book:  “The western is not the creation of a unique artist; it is the creation of a nation.”  It is easy enough to dismiss the whole genre of westerns.  One could say they are formulaic.  But traisping around the literary world reveals that most types of writing follows formulas.  One could, but not sustain, an argument that westerns are full of myths, stereotypes, and predictable outcomes.  If we trash all literature with those characteristics, we trash all literature.  Westerns are, in many cases, pumped out by the dozens, with minimal literary development and depth, but again that is a two edged sword.  Writers such as Mark Twain,  Charles Dickens, and Walter Scott whipped out novels with seemingly reckless abandon.  (Are the critics like me, jealous?)

True westerns are built around a code.  The conflict is that of chivalry in a lawless region.  Many westerns echo the themes of the King Arthur stories or retell the justice of the Robin Hood legend in difficult times.  There is always something more civil, more decorous, more safe in the world back east.  But the people in the westerns are compelled by history, destiny, circumstance, opportunities, and enhancements to stake out claims in the ever tumultous world out west.

Wister referred to in the title is Owen Wister.  He was not the first person to write a western story, but his novel The Virginian, which first appeared in 1902, was a major and defining novel that set the standards for westerns.  Not only did lots of other writers and westerns spring from that beginning, movies versions of The Virginian and a ten-year-running television show also resulted.  The book was a source for many recurring western scenarios.  It also contained such statements as this:  “I’ll give you till sundown to leave town.”

Here are a few fun and fascinating points I came across in just the beginning parts of this book:

“In the 30 year period between 1870 and 1900, fewer violent deaths occured in Dodge City than in any major modern American population center last year alone.”  p. 5

“No records exist to suggest that two gunmen of equal reputation ever faced one another in combat.  When Hickok was marshal of Abilene, he and John Wesley Hardin met and agreed to stay apart for the duration of Hardin’s stay.  Those deadly fast-draw contests beloved of fiction, with chivalric rules and modes of accepted behavior, were unknown in a climate in which the man left standing by whatever means was considered the better of the pair.”  pages 7-8

“Complete accuracy is not the business of fiction.”  page 10

Speaking of the villain in The Virginian, Estleman writes, “He stands as a mundane symbol of a greater evil, threatening an unspoken system of honor in a way no mere challenge between men can approach.  If he lives, decency dies.”  page 14  (That statement alone convinces me that I want to read The Virginian after I finish this book and that westerns have a message for our time.

This book is going to be a fun read.

3 thoughts on “The Code of the West”