I delight every day in seeing the book tree my students assembled.

The Advent season and Christmas celebration has spawned quite a few good books over the years.  There is a certain sentimentality that tends to overwhelm Christmas-centered stories, and Hallmark has featured all too many overly sentimental and even mystical stories.  All too often the happy endings are more centered on romance rather than redemption.

But, after a year of reading of mayhem and murder, guile, deceit, lies, immoralities, and wickedness of every kind (the normal fare for a teacher of history, literature, and government), a few happy endings and chuckles are a relief.

Here are some of my favored novels, stories, and even histories that are read and re-read during the Christmas season.  There are the usual suspects listed here, but maybe a few titles new to you.

1.  A Christmas Carol by Charles Dickens.  I know this is a predictable and unsurprising choice, but can you imagine a list of readings for the season that did not include this Dickens’ classic?  Many editions include other Dickens stories for anyone who wants variety.  But A Christmas Carol endures many tellings, many versions and variations, and rendetions on film or on the stage.  I rewrote the story some years ago as a western, titled A Christmas Corral, and I love it as well. 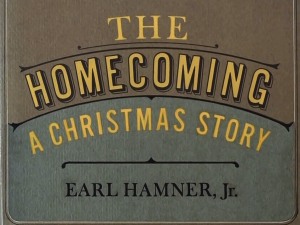 2.  The Homecoming: A Christmas Story by Earl Hamner, Jr.  I have read The Homecoming every year for the past several years and I watch the movie.  They are different, and I love them both.  I re-read this book with the hope of absorbing something of Hamner’s story telling method. The story is of a Virginia family during the Great Depression.  A mother with seven kids (the movie and television series could only afford 6 kids) are nervously awaiting the arrival of the husband and father who is traveling home on a cold snowy night.

3.  The Good Shepherd by Gunnar Gunnarsson.  I recently discovered this delightful old book.  Gunnarsson was an Icelandic writer and was quite popular in his day.  This book came out around 1940, and I am not sure that it has ever been reprinted since then.  (I happened to see another copy of it at a used book store today.)  It is beautifully illustrated also.  This is a calm, relaxing, parable-like story of an old shepherd who yearly goes out during Advent in search of sheep that were not rounded up earlier.  He is accompanied by his dog and and old ram.  There is not much in the way of plot or action, but this story is rich in the calm, beautiful cadences and reflective meanings of the story.

4.  Shepherds Abiding by Jan Karon.   If someone just picked this book up and read it, I doubt that they would like it.  I don’t think it is one of Karon’s best, but it is part of a sequence.  Several years ago, I began reading Ms. Karon’s Mitford series in order.  I only read from Karon books at night when my mind was zapped.  I did not plan on liking them, for I was only reading them to figure out why my wife had laughed and cried so much when she was reading the books.  I admit that against my will, I came to like, appreciate, and enjoy my visits to Mitford.  As part of the series, this book is fun.

5.  The Christmas Quilt by Thomas J. Davis.  I discovered to my surprise today that the author of this book is a church history scholar (I have the book John Calvin’s American Legacy) and that he has written a sequel to The Christmas Quilt.  Before I read this book, I anticipated that it would be a sappy, sentimental piece of Christian-fluff fiction with a Christmas theme.  But I was wrong. This is a good story set in the south and a Christian book as well.  It is beckoning me to re-read it and to pick up the sequel (titled The Aluminum Christmas Tree as well.

6.  A Song I Knew by Heart by Bret Lott.  This book is a retelling of the Book of Ruth, but is set in modern America.  Two widowed women are struggling to deal with their losses.  The mother, named Naomi, of course, is also dealing with issues of sin and forgiveness from the past.  With their lives wrecked, they go back to some of Naomi’s deceased husband’s family in South Carolina.  The plot line of the story comes together during the Christmas season.  I was inspired by this book to preach through the Book of Ruth during the Advent season several years ago.  Bret Lott is one of my favorite writers,

7.  The Other Wise Man by Henry van Dyke.  For years, we had this book out on display simply for the aesthetics of the old book.  Then, one year I read this book and loved it.  This was a very popular book in its day and has been reprinted many times.  The story is based on a legend and has not Biblical support, but the story itself is a good one that is well told.

8.  The Gift of the Magi by O. Henry.  The short story writer O. Henry (William Sidney Porter) excelled in the surprise ending.  This story is a masterpiece in that respect.  But the story is worth reading again and again because it is the lyrical beauty and the excellence that causes the reader to be surprised again and again at the power of love as portrayed in this story.

9.  The Little House on the Prairie by Laura Ingalls Wilder, particularly, the chapter titled “Mr. Edwards Meets Santa Claus.”  The sure test for good children’s literature is this:  Adults enjoy the books as well.  This is the case with Laura Ingalls Wilder’s books.  This chapter from the first of the Little House books, is moving.  Laura recounts that the Christmas where she and her sister got mittens, tin cups, a penny each, and peppermint sticks was the best ever.  The television series pilot (I think) included this story.  Victor French played Mr. Edwards, and that episode was very well done.

10.  Norman Rockwell’s Christmas Book.  I think it was after Christmas in 1991 that Stephanie and I found this book at a now vanished independent bookstore on the clearance table. (Our first Christmas!)  It includes the O. Henry story, the selection from Laura Ingalls Wilder, along with many other stories, poems, hymns, and, most certainly, art by Norman Rockwell.

11.  A Foxfire Christmas by Eliot Wigginton.  The Foxfire series was quite popular some years back.  These books were collections of lots of folklore, folkways, and stories from people who grew up in the late 1800s and early 1900s.  This book includes lots of sad stories, for people didn’t have the means to celebrate as we do today.  But there were also fun times and celebrations.  We should realize that the American-style Christmas we celebrate is a relatively new tradition.

12.  Silent Night: The Story of the World War I Christmas Truce by Stanley Weintraub.  During the Christmas season in the trenches of World War I, the shooting stopped for a time.  Germans, Brits, and Frenchmen who had been locked in combat since August joined together in singing hymns and carols, in sharing Christmas parcels from home, and in playing soccer.  The leadership on both sides panicked, but to their relief, the killing resumed shortly after the holiday break.

13.  11 Days in December:  Christmas at the Bulge 1944 by Stanley Weintraub.  In December of 1944, the Germans launched an offensive attack at a weak, undermanned sector of the American lines.  It was Germany’s last gamble in a losing war, but for a time, the Americans were being pushed back.  The most famous defense and holdout was the soldiers who were besieged at Bastogne in Belgium.  This was a hard Christmas and the winter of 1944-45 in Europe was one of the worst.  Weintraub has written several other books about Christmas during historical events.  I don’t have them, but am keeping my eyes open for good copies on the bargain tables.