Some years ago, John Stott wrote a powerful book about pastoral ministry called Between Two Worlds. His main idea was that Christian ministers have to inhabit the world of theology and the environment of the study, but they also have to have a foot in the other world. By that, he means the world where the ordinary parishioner and man in the street lives.

Anyone truly interested in politics can draw a parallel here. By truly interested, I mean someone who is actively engaged in watching, reading, and keeping up with politicians and political issues. It would also include government teachers, like me. The need is for the student of politics to have one foot firmly planted in the world of political philosophy and history, with the other foot in the nuts and bolts of political campaigns and the hardball nature of politics (to borrow from Chris Matthews’ show).

If elected, LBJ wanted to make all white people marry blacks, but the Vietnam War, I suppose prevented that. Goldwater’s plan was for all of us to live in the poor house.

When I was in third grade, the nation was involved in a fierce political election year. It was 1964 and the Democrats nominated Lyndon B. Johnson, who had taken office upon the death of John Kennedy. In an amazingly plotted and executed campaign strategy, the Republicans had nominated Barry Goldwater, the most conservative candidate since the Coolidge-Davis campaign of 1924.

Having read quite a few accounts of the 1964 race, I now know that the issues were complex, the voters were bounced back and forth between two very different philosophies of governance, and that the Goldwater mission was doomed from the start. Events after the election would result in a drastic change in the nation leading to a reversal of the Goldwater debacle when Ronald Reagan took up the conservative mantle in 1980.
Back to third grade: We were going home on the school bus when a political argument broke out. I came from a family deeply rooted in the Democrat tradition. Politic issues were not discussed, politicians were not evaluated, ideas had no consequences because they were ignored. And my family voted every season against Herbert Hoover. Or if not voting against Hoover, they were voting against Reconstructionist Republicans.
The dividing point on the bus quickly became clear and pointed: If LBJ was elected, the Goldwaterites asserted, he was going to make white people marry black people. (I must point out that no one on that bus used terms like “black people” or “coloreds,” and the term “African-Americans” had not been invented.)

“Oh yeah,” came the rebuttal, “If Goldwater is elected, then he will make us all go to the poor house.” My sister, rarely political or loud, stood up and said, “I had rather marry a black person than have to go to the poor house.” (I wasn’t bothered because at that age and for the next 20 plus years, I wasn’t married at all.)

A Republican’s hope for the future from my own learning experiences.

Only later in life did I understand, from other elections, that these were not the real issues. Instead, Republicans were all intent on causing depressions like the Great Depression, while Democrats were keen on getting us into wars. That made the issues much simpler.

A Democrat plan for the future, according to the way I learned about politics.

For a time, I looked back at those political arguments as the products of the stupidity of the youth. Now, I am finding–here in the late winter of political discontent–that much political argumentation is still hovering around those levels and have possibly sunk below them.

I am a conservative Republican, a Christian, and a follower of both the Reagan-Buckley brand of conservatism with a big dose of Calvinist political theory. That being said, I don’t have much personal experience dealing with people on the left. I oppose them, try to dissect their arguments, fear them implementing policies, and generally hope to see them defeated in elections. Internally, they have their own arguments, contentions, and conflicting visions.

The right side of the political spectrum in America contains lots of good hearted, brilliant people. It also contains lots of fellow travelers, inconsistent followers, muddled thinkers, non-thinking reactionaries, and people who never think about the issues, but still vote the way I do.

The political right in America also contains a kook fringe. These people are on the extreme. In many cases, they are good family folks, hard working, tax paying, law abiding folks, who go to church on Sundays and love their neighbors as themselves. Nevertheless, their political thoughts exist in an area of kookiness, fanaticism, slippery-slope fallacies, and wild-eyed visions.

In the past, they found a home in organizations such as the John Birch Society. Some found a political hero in George Wallace in 1968. Many were nurtured on conspiracy theories. Many were apocalyptic, meaning that they found the Book of Revelation to be a daily guide to what was happening in the U.S., the U.S.S.R., and the Middle East.

Now, their diet is much more plentiful and they have better means to network. The internet, along with conservative talk radio, provides them with plenty of fodder. Let’s admit also, the cultural degeneration of America and the failed leadership in both parties, float the kook boats as well.
They constitute the CCCP. That is, they are, often self-labeled as Conservative Constitutionalist Christian Patriots. They are, by the way, often well read and versed in their doctrines, and I share many of their convictions. I recognize that to some on the other side, I am one of them.
Demonizing is the main ingredient to this form of politics. Issues are never nuanced, complex, or detailed. It is the Forces of Light versus the Minions of Darkness. It is truth against error. It is America the Land of the Free versus One-Worlder, Common-Core, Muslim-loving, Atheistic, LGBTQ, big spending socialist commies.

We all know, as conservative and mostly Republican folk, that Pres. Obama, VP Biden, Hillary Clinton, John Kerry, Al Gore, and the heirs of Huey Long are all in IT together. All Dems, all libs, all in lockstep to wreck the nation and institute One World Government, favorable to Muslims and homosexuals. Bernie Sanders, an avowed Socialist Senator, is different only in being a bit more transparent and honest.

But the Bushes also had to be a part of the problem. Believe me, there is much to find fault with the three terms of the Bush Presidencies. The Republican Senators and Congressmen who are currently serving are also indicted. Believe me, many Republicans serving in Congress have fallen short of our expectations. Certainly Bob Dole and John McCain (both war heroes) are perpetrators of the problem and co-conspirators. Mitt Romney was a wolf in wolves’ clothing, and Paul Ryan was little better.

Of course, it is well to exempt from all these attacks the one pure virgin of Conservatism, Ronald Reagan. (Don’t misunderstand, I nearly idolize Reagan!) Reagan switched positions on issues; Reagan reneged on promises; REAGAN CUT DEALS WITH DEMOCRATS; Reagan had buddies on the left; Reagan supported the Brady Bill which was anti-Second Amendment; Reagan soft-shoed many social issues, although he spoke favorably on them to fellow conservatives; Reagan picked establishment goons like George Bush, Donald Reagan, and James Baker for high positions; Reagan picked Democrats like Daniel Patrick Monihan and Jean Kirkpatrick for high positions; Reagan buddied up with Gorbachev; Reagan increased deficit spending; and on it goes.

Reagan and his worst pick for the Supreme Court, Anthony Kennedy.

Sure, Reagan nominated Antonin Scalia (very conservative) for the Supreme Court, but he also picked Sandra Day O’Connor (centrist) and Arthur Kennedy (center-left). In short, Reagan was a RINO, a moderate, a tool of the left, a compromiser, and just another politician.
So, what is to be done? (That statement, by the way, was the title of a key essay written by Vladimir Lenin, the father of Russian Communism, so it should comfort all those who already suspect that I am “one of them.”)

Let’s return to the concept that John Stott applied to the ministry. Politics exists between two worlds. Conservatives who are students of politics, political junkies, and activists need to read widely, broadly, and historically.

There are lots of “hot off the press” conservative books that focus on current issues with quick solutions. Politicians, political candidates, radio and television commentators, and journalists whip out these books constantly. Many are filled with things that are quite good. Most of these books, however, have about a two year life-span at the most. Just look in the used book stores and bargain bins for such political classics as Unfit for Command, which gives convincing reasons not to vote for John Kerry. (If you don’t understand, take note that that book has been irrelevant since mid-November of 22004.)

These books are made for quick consumption. Notice, that usually the print is large and the spacing is wide. This is political fast food.
For that reason, a person needs to read the classics in political philosophy. An introduction to such can be found in George Grant’s American Patriot’s Handbook. From there, start on with such books as The Federalist Papers and source books on American history.

At some point, such works as Plato’s Republic, Aristotle’s Politics, Machiavelli’s The Prince, John Stuart Mill’s On Liberty, pertinent sections of Calvin’s Institutes, and other heavies from the past.

Read lots of political histories. Build up your biceps by reading biographies of Washington, Jefferson, Adams, Jackson, Lincoln, both Roosevelts, Reagan, Churchill, and others. Read about people from history that you don’t like. By the way, Thomas Flemings’ recent book The Great Divide: The Conflict Between Washington and Jefferson That Defined a Nation. 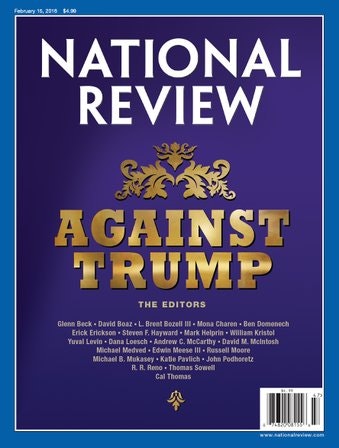 Believe me, I have not even scratched the surface of political readings. So, to cap this argument, read National Review, the flagship of conservative thought. Avoid all magazines, commentators, blogs, and other sources that are shrill. Eschew conspiratorialists, Birchers, apocalyptic dooms dayers, ultra-conservative purists, racists, survivalists, and people who have uncovered secrets concerning world takeovers.

In the next installment, I will focus more on book suggestions. My main topic will be on some useful Christian studies that will help formulate sound political thought.