A friend of mine, David Leach, recently asked me if I sometimes wish I had specialized in one area instead of branching out all over the place.  He pegged me right.  I think I must have a severe case of mental ADD; that, a form of attention deficit disorder that causes me to jump from one topic or subject to another without ever completing a thought on the first topic.

Many of my Genoa Central students remember me as the teacher who was obsessed with the War Between the States.  I don’t know why.  That war usually only occupied about 7 of the 9 months of the school year when I was teaching at Genoa.  For a time, I thought I was becoming a specialist.  Then my interest didn’t wane, but they expanded.  Studies of “The War” broadened to studies of the South.  Then along came the Agrarians, who were historians, biographers, and poets.  Southern literature consumed me, and became a specialty, until it forced open a door to the underpinnings of the Agrarian worldview–Western Civilization, Christendom, the Judeo-Christian/Greco-Roman culture.

That account is still incomplete.  Many are the times when I have journeyed off into Russian history, the Protestant Reformation, the Tudor and Stuart eras of British history, William Faulkner, Caroline Gordon, Jesse Stuart, Twentieth Century political history, and the development of the music we know as Bluegrass.

Specialization might have resulted in my having become a recognized scholar, instead of a bookish gad-fly.  Maybe I could now be safely confined on a university campus doing research on the cotton trade between South Carolina and Jamaica during the post-revolutionary era.  I could stand tall knowing that no one could dare cross me on that topic.  But, it didn’t happen and I continue to flit from book to book, era to era, classic to classic, genre to genre, biography to biography, and so on.

Certain events do steady my racing mind.  Today is the Fourth of July, which means it is Independence Day.  (Old joke:  Do they have a 4th of July in England?  Yes, but they do not celebrate it.)

I have had an increasing love and appreciation for the American War for Independence over the years.  The causualty figures from that war seem often inconsequential when compared to the death tolls found in the War Between the States or the Two World Wars.  The War for Independence contains a certain number of anomalies.  Economically successful colonies were revolting from the most prosperous, free, enlightened, and well governed nation in the world of that time.  Certainly, George III had his flaws and Parliament was often quite foolish and many Royal appointees were dolts.  The Declaration of Independence rips into the King for his tyrannical ways.  But this was fine tuning.  Russians, Prussians, Spaniards, Frenchmen, and hosts of subject peoples across the globe were under far worse ruler and regimes.

I would liken the American War for Independence to some of the doctrinal battle-royals that occur amongst Christians.  Being in the Reformed or Calvinistic tradition, I am well familiar with the battles both before, after, and in addition to the many conflicts highlighted by John Frame in his essay “Machen’s Warrior Children.”  The Americans who bandied together to form Committees of Correspondence, Continental Congresses, and the Continental army were fighting over small matters that violated major principles of political philosophy and theology.  Americans today would likely welcome an act like the Tea Act, which actually resulted in lower prices for tea.

I find myself straying away from the purpose of this blog which is to highlight some good books on the War for Independence.  I will mention a few, but warn that there are many.  This blog was inspired by reading a similar type essay that was written by Dr. Thomas S. Kidd of Baylor University.  Dr. Kidd’s post is titled “Five Great Books on the American Founding Era.”  In that post, he humbly alludes to, but does not mention his own books on the topic.

Here are my choices: 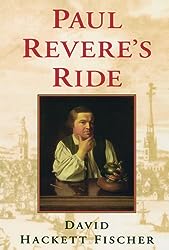 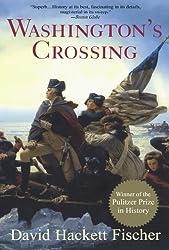 David Hackett Fischer’s two volumes are real gems. The first is Paul Revere’s Ride and the second is Washington’s Crossing. One might wonder how a short and only semi-successful event such as Paul Revere’s midnight ride could merit a whole book.  Fischer covers a lot of ground, both biographical in terms of Revere and historical in terms of the events that led to an actual outbreak of hostilities.  The book Washington’s Crossing is the real story of the Declaration of Independence, in my mind.  Until Gen. Washington exploited a chink in the British army’s armor and hit them hard and unexpectedly at Trenton and Princeton, the Declaration was just words.  The pen might indeed be mightier than the sword, but it is the sword which often gives force to what the pen has written. 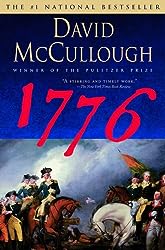 David McCullough has also written two fine books on America’s founding.  I remember being very reluctant to read John Adams.  I thought both John and son, John Quincy, to be too stuffy, too Yankee, too prim and prissy.  John Adams, along with being a highly educated and scholarly man, was a real dirt farmer.  He had his hands in the soil far more often than his friend/enemy/friend again Thomas Jefferson.  And he was principled to a degree that it often cost him popularity.  Unsuccessful as a President, he was vital to the American cause.

1776 is a study of the critical year when the Declaration was signed.  It is interesting that the signing took place roughly in the middle of that year.  It was not a pretty or pleasant year for the Americans.  Those were the times that try men’s souls, to paraphrase Thomas Paine.

Thomas Fleming has written a number of excellent histories, and some novels as well, on the American War for Independence.  These two books give a good account of both the beginning and the ending of that war.  Now We Are Enemies originally came out in the early 1960s and has been reprinted.  Bunker Hill, sometimes known as Breed’s Hill, was a critical battle.  The newly formed Continental Army, and this was before Gen. Washington had control, managed to give a good account of itself at this early battle.  The British succeeded in driving the Americans from the field, which puts the battle in their “win” column, but they paid a hefty price.

The Perils of Peace: America’s Struggle for Survival after Yorktown was an amazing eye-opener.  The standard history textbook quickly jumps from the victory at Yorktown, Virginia in 1781 to the end of the war, the Peace of Paris, and the post-war status of the newly founded nation.  But there were two long years between Yorktown and victory.  The British were far from whipped and the possibilities of American independence were just that–possibilities.  This is a great account of the missing gap in our history texts.

Yankee Doodle Boy and Private Yankee Doodle are the same book.  Joseph Plumb Martin was a soldier in the Continental Army during many of the most crucial years of the war.  As the first book’s subtitle notes, this is “A Young Soldier’s Adventure in the American Revolution Told By Himself.”

I remember well the day that Stephanie and I were at Colonial Williamsburg (a place I love).  We had been mustered in to a small regiment that were being trained as infantry for battles.  Colonial Williamsburg includes lots of interactions with colonial and Revolutionary War activities.  Our guns were sticks, and we were given a few rudiments of marching and firing.  The narrator guide made several references to a book, which I quickly picked up at the bookstore.  It was Private Yankee Doodle.

A few years later, I discovered the abridged version of this first-hand account and added it to the books I often use in teaching junior high American history.  A soldier’s life is scary, confusing, dull for long stretches, filled with longings, which include hunger, and times of terror.  This is a great book for seeing the war from someone who was there and was young enough to experience the long-term benefits.

Johnny Tremain by Esther Forbes is a novel.  More than that, it is a novel that is usually pitched toward younger, maybe junior high age, readers.  Both of my daughters read it in sixth grade and loved it.  My daughter Caroline was obsessed with it for a time.

Don’t skip over this by thinking that Johnny Tremain is juvenile fluff.  This is a great book.  I loved it when I read it in high school on my own and have loved ever subsequent re-reading of it.  It is a great story, well told.  But it is also a good historical novel.  Esther Forbes, who also wrote a really good work on Paul Revere, captured colonial Boston during the time when events were quickly moving from political talk to fighting.  Many of the key figures of the events around Boston show up in the book, including Revere, Samuel Adams, and others.

One last note, many years ago, Disney made a movie version of Johnny Tremain.  It was a weak version of the book and very disappointing.  Surely there is someone out there somewhere who can see the potential for this book to be made into a first rate movie.

Well, my mind has been on the War for Independence long enough.  Now I am wondering what Abraham Kuyper has to say about Dutch politics in the late 1800s.

One thought on “Books on American Independence”