History books come in different modes and styles.  They vary as much as breeds of dogs.  Some of my favorite history reads are biographies.  Accounts of particular events, such as battles or political reigns, are also enjoyable.  Specialized histories are often overly detailed and appealing only to a limited audience.  Some topics, whether broad or narrow, reach wide groups of people.

Of late, I have read several really good books that have been overviews of wide and ranging topics.  The ones I will feature here are all books that could just as easily fit on the “theology shelf” as on the “history shelf.”  When I read Loraine Boettner’s Studies in Theology back in 1974, my mother asked, “Are you changing your [college] major?”  “No,” I answered, but I sensed that I was changing how I would understand my major–history.  The works of C. Gregg Singer and R. J. Rushdoony further confirmed my new-found direction. 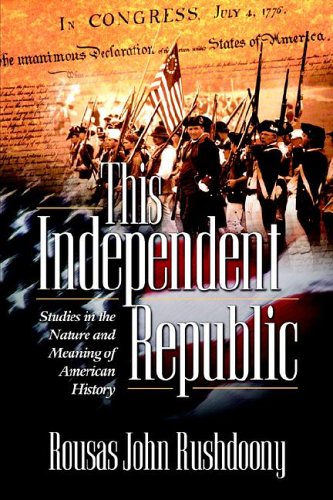 The number of books, both new and old, that are out there for a Christian majoring in history is overwhelming.  I would suggest that a young student or teacher simply settle for just collecting and reading a few thousand of them.  The rest will have to pass by the wayside.

The first book in this category is Richard Weikart’s The Death of Humanity and the Case for Life.  One might think that this was another book promoting a pro-life culture and opposing such things as abortion, euthanasia, and genocide.  Well, it certainly does all that, but this is a historical study.  The modern age was not birthed in an egg that just appeared out of nowhere.  Ideas have consequences, and the morning news is always reporting the consequences of ideas.  Philosophers, scientists, social commentators, and political leaders were mixing the brew of modernity for centuries prior to our times.

Francis Schaeffer’s book How Should We Then Live?, published in 1976, is still unsurpassed as a panoramic view of the men (and women) and ideas that have shaped Western Civilization.  Dr. Weikart, who teaches history at California State University, has produced a great supplement and update to Schaeffer’s work.

In just Chapter One, titled “Man the Machine,”  Weikart begins by discussing Julian La Mettrie, author of the book Man the Machine in 1747.  La Mettrie said, “The soul is but a principle of motion or a material or sensible part of the brain, which can be regarded, without fear of error, as the mainspring of the whole machine.”  That is just one explosive statement from a materialist philosopher from the French Enlightenment.

Other thinkers covered in chapter one include August Compte, Claude Helvetius, Karl Vogt, and Bertrand Russell.  These may seem like obscure names of unimportant people.  They are not as interesting as such historical figures as George Washington and Napoleon, but these were men whose ideas, based on faulty worldview, helped create the world we live in today.

Christians have answers to the faulty worldviews.  Abraham Kuyper, the Dutch Christian polymath, politician, and theologian, gets credit for emphasizing a “world and life system,” which is more often called “a Christian worldview.”  He was not the first or the last to call upon Christians to love God with all their minds.  But, sadly, the church has often retreated from the world that Christ died to save.  Christians have often conceded vast swathes of human endeavors–government, art, sciences, literature, economics–to the unbelievers.  Our hope is in heaven, we say, as we retreat across the vast landscape once dominated by Christian thought.

Keith Sewell was a history professor at Dordt College in Iowa.  He is Brit who labored for years in America and now lives in Australia.  Across three continents, several decades of study and teaching, and experiences in various churches, he has written a blockbuster on Evangelical Christianity.  His book is The Crisis of Evangelical Christianity:  Roots, Consequences, and Resolutions.

It will be difficult for the books I read over the remaining months of 2016 for any of them to best this one.  This book is essential reading in both the fields of history and theology.  With the 500th anniversary of the Protestant Reformation just months away, it is a good time to begin the celebrations, but also to discern the shortcomings.  Sewell focuses upon several stages of the Reformation.  Often history textbooks include chapters on the Renaissance, the Reformation, and the Scientific Revolution side by side.  The subsequent chapters then pick up the theme of the Enlightenment.

The Great Commission calls us to go out into all the world and proclaim Christ’s Kingdom.  Again, the Church has often limited this to soul saving and individual experiences.  (And neither Dr. Sewell nor I am against those things.)  But the Kingdom is bigger and applying a Creation-Oriented, Bible Directed worldview is still lacking.

But the church did not begin to stumble after the Jesus Movement of the 1960s.  Hence, this book details the history of Christian thought and action during pivotal events such as the English and Scottish Reformations.  In both the Americas and Britain, the Great Awakening was truly a great revival, but it left many gaps open for weakening the faith.

The Social Gospel, the First World War, the rise of Darwinian Naturalism, and other events slung the faith into one turnbuckle after another (to use a wrestling metaphor).  But Evangelical Christianity has had voices crying in the wilderness.  Dr. Sewell recognizes and appreciates the work of the Dutch thinkers such as Herman Dooyeweerd who offered a broader message.

Millennial debates and distractions, although not unimportant, have not advanced Evangelical Christianity.  I heard a graduation message recently where the speaker said we needed to take more heed to Jonathan Edwards’ studies of Old Testament prophecies and their fulfillments than to just waiting for Jesus to come.

This book advances the kind of thinking that will reorient us to a broader Christian vision.  The past is full of riches and mistakes.  This book can help us distinguish the two.

I have previously touted the merits of Timothy George’s Theology of the Reformers.  The book was originally published nearly 30 years ago and is now been reprinted and expanded.  I will sing its praises again.  The chapter on the Medieval Church was balanced and outstanding, but that was just the beginning.  Martin Luther, John Calvin, and Ulrich Zwingli are covered in extensive chapters.  I have read numerous accounts of all three men, but found myself listening (in my head as I read) with the excitement of a new convert to Reformation studies.

This book is not for beginners.  Michael Reeves’ The Unquenchable Flame: Discovering the Heart of the Reformation  is the better starting grounds.  But for the person who has read the biographies, histories, and and actual writers, George’s book is top shelf.  I also greatly appreciated his study of Menno Simmons and the Anabaptist movement.  Dr. George, a Reformed Baptist, identifies much more with Calvin and Luther than with Simmons, but still he gives a thorough and helpful account of both Simmons the man and the broader Anabaptist movement(s).  I also learned quite a bit about William Tyndale, the last person covered and one not covered in the original edition.

Timothy George has been moved to the rank of being one of my “must have his books” writers.

I am currently a bit more than halfway through The Church: A Theological and Historical Account by Gerald Bray.  At this point, I must confess to some personal irritation and frustration.  Why are there so many good books that I not only need to read, but I need to read again and take extensive notes?  God loves His Church and His People.  One way that He is bringing about our redemption is by raising up good scholars and solid men of God who can instruct others.  Ecclesiastes 12:11 says, “The words of the wise are like goads, and like nails firmly fixed are the collected sayings; they are given by one Shepherd.”

This book, like several of the previous ones, consists of lengthy chapters covering wide periods of history.  These include the New Testament Church (the first hundred years), the Persecuted Church (a few centuries after the Church’s beginning), the Imperial Church (from the age of Constantine through the Middle Ages), the time of crisis in the late Medieval Church and Reformation time periods, and then on up to the present.

Bray is an Anglican who has had lots of interaction with different denominations and Christian traditions.  He is a searching an honest historian.  We may have our manuals of church government laying out the “Biblical directives” for our congregational, presbyterial, or episcopal systems, but we are products of history.  That is, we are putting forth good and pragmatic methods that have some, but not absolute Biblical bases.

This book is challenging, is not an easy read or mindless devotional, but it is a good study for both heart and mind.

One thought on “HIstory: The Big Picture”