I recently finished reading the book Jack Kemp: The Bleeding Heart Conservative Who Changed America by Morton Kondrake and Fred Barnes.  Long portions of the book deal with the details of tax and economic legislation from the 1980s.  Numerous times, the authors highlight flaws in Kemp’s personal habits, speechmaking, campaigning style, organizational skills, and policy thinking.  While the tax laws may be less than interesting (at least to me) and the personal flaws a sad reminder that Kemp was human, there is something about this book that is far more troubling.  There is something about this book that makes me wish it could go away.

Jack Kemp was a member of Congress from 1971 to 1989.  He represented a district in New York that was traditionally a working class Democrat district.   He rose to leadership in the House largely through his dynamic personality and strong economic convictions.  During the Reagan years, he had his greatest influence on policy, and that laid the groundwork for his 1988 run for the Presidency to succeed Reagan.  Failing miserably in the primaries, he was appointed Secretary of HUD (Housing and Urban Development) during George H. W. Bush’s Presidency.  Kemp’s last major role on the national scene was his running for Vice President on the Dole-Kemp ticket in 1996.

I want to focus on 5 Key Take-Aways from this book.

First, Jack Kemp was a reader.  His first claim to fame was as a college and later professional football player, a quarterback.  He was not, however, a scholar-athlete.  He was an athlete that became a scholar.  It didn’t happen overnight, but even in his football days, he was reading Frederich Hayek, Ludwig von Mises, and Milton Friedman.  Reading became a life-long pursuit.  He read to learn and to then apply.  He read deeply and thought about what he read.  His obsession with economic policies did not spring from polling information or political fads, but from deep rooted convictions after reading.

Second, Jack Kemp was a teacher and evangelist for economic and social issues.  The book’s subtitle says that Kemp changed America.  He did this by changing the thinking of key people.  The 1960s-70s produced a number of threatening issues in America.  The conservative movement was slowing formulating answers and even more slowing being heard.  Kemp, along with some other House and Senate members and people in other governmental roles, being seeing the advantages of supply-side economics.  Winning converts to this way of thinking was difficult.  The Republican Party had to be won over first.  It never totally happened, but Kemp did manage to convince a few, such as Ronald Reagan.

Kemp’s love for policies continued with him as a passion throughout his life.

Third, Kemp understood how to lead.  If anything, he may have been too nice to opponents, too unwilling to burn bridges, too willing to seek bi-partisan leadership.  He butted heads with people in both parties.  But he also worked to build alliances, coalitions, and working agreements.  One of his long-time friends and allies was Democrat Senator Bill Bradley of New Jersey.  Kemp clashed many times with Ronald Reagan.  Reagan’s diaries contain numerous complaints about Kemp’s hard-headedness, and yet Kemp was one of Reagan’s greatest admirers.

Any idea that a real leader could transform America by imposing a conservative agenda on the whole nation is unachieveable.  Making enemies in Congress might be admirable to some, but it is not leadership.  America has two major parties and dozens of variations of beliefs and convictions within those two parties.  Leadership is coalition building.  Leadership has to involve compromising.  Leadership involves doing things that offend the most adamant ideologues.  Kemp, like Reagan, understood that.

Fourth, Kemp had a vision for Conservatism and the Republican Party.  Too often, conservative “purists” tout themselves as being the “true conservatives,” while belittling opponents as being sell-outs, RINOs, and even moderates or liberals.  Conservatism, as understood by such people as William F. Buckley, Ronald Reagan, and Jack Kemp, is not a nice neat square package with sharp corners.  Remember that Reagan had such people in his circles as Democrats Jeanne Kirkpatrick and Patrick Monihan and Republicans such as Richard Schweiker.

Kemp wanted to see the Republican Party drawing lots of votes from African-Americans, Hispanics, and other minorities.  He transformed the Department of Housing and Urban Development by his vision of actually using government to help the poor and needy to help themselves.  He really had a desire to reach out to people of different backgrounds, levels of education, and political affiliation.  Sadly, the Republican Party has stagnated on this kind of appeal.  It is currently re-defining itself as a white working-class party, after having been a more white upper-class party in previous years.

Kemp’s football career gave him lots of firsthand experience with working alongside black athletes.  It also exposed him to white prejudice.

Fifth, Kemp exemplified what a conservative Christian candidate for high office would look like.  There are, no doubt, many conservative web-sites and writers who scoff at the idea that Kemp was a conservative, or certainly was not a “true conservative.”  We expect Abraham Kuyper to suddenly emerge without having the groundwork for such a leader.  And, most Calvinists I know would oppose Kuyper for being a sell-out.  A Christian politician has a different ministry than a Christian pastor or theologian.  The church is to protect sheep against wolves, while the government often has to be a coalition of all kinds of animals.  Politics is not for everyone.  Kemp was a Presbyterian with definite Christian beliefs personally and convictions on a public scale.  He never aspired to become Theologian-in-Chief or Pastor-in-Chief.  He was, like all believers, weak in some areas of understanding and practice.  Some of his views needed a bit of fine tuning.  But he was a man of true faith and desire to serve God in the field of public service.

A final and less important point:  I had always wished that Jack Kemp had been elected President because my wife’s maiden name is Kemp.  Maybe I could have benefited from that connection! 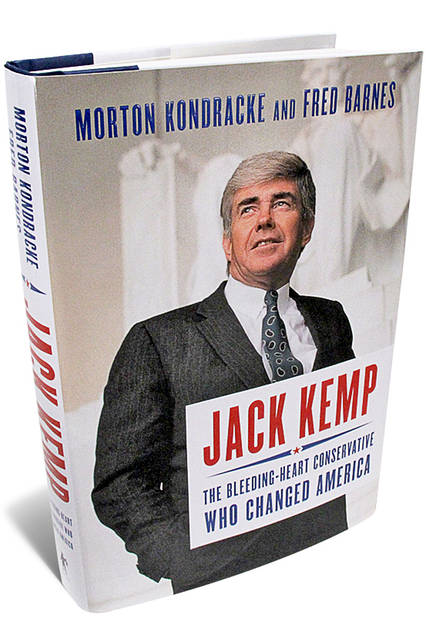