What an election year it was.

The Republicans nominated a man whose party affiliation was not clear.  Was he even a Republican?  Did it matter?

Then there was the rift between the Republican Party establishment and the conservative factions in the party.

Add to that, the candidate was older than most.  Plus he had no experience as an elected political leader.

The Democrats were burdened by having been in power too long with too many growing complaints about the economy and too many scandals looming.

Somebody needed to clean up Washington, or to put it another way, someone needed to drain the swamp.

Perhaps even bigger than the national scene was the specter of international threats and terror.  The enemies of what America stood for were ruthless and determined to infiltrate and undermine our way of life.

One candidate thrilled the crowds, while the other, although appearing more cerebral, failed to connect with the common man.

No fear because there was a blue wall that would come through with lots of electoral and popular votes.

The whole race might just hinge on a group of swing states.

Those are the facts of the Presidential election as discussed in a new book.  The book is titled When America Liked Ike: How Moderates Won the 1952 Presidential Election and Reshaped American Politics by Professor Gary A. Donaldson of Xavier University of Louisiana.  There are not a lot of substantial similarities between the 1952 election and the one we have just witnessed (endured?  suffered from?).  Despite my opening statements, 1952 was not a precursor of 2016, but there are patterns that emerge in each election, coalitions that come together, factions that divide, issues the pop up, and methods that are developed that impact elections for years and decades to come. 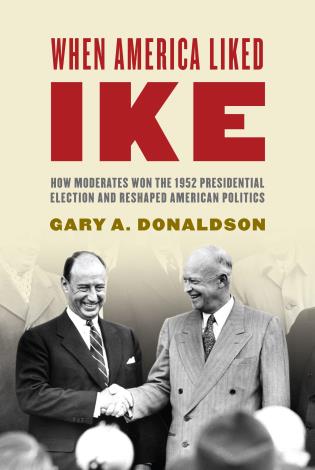 Much that defines the modern day Republican Party can be discovered in the issues of the 1952 election.  Contrary to what is often said and what many of us might wish, the Republican Party is not THE Conservative Party.  It is, in our time, more conservative on many issues than the Democrat Party.  But conservatism is a wide-ranging collection of viewpoints and ideas that unites a loose coalition in some cases around a candidate or party.  Often conservatism is a measuring rod, so that like the word “tall,” the word “conservative” means something when compared to something else.

In the 1940s-1950s, conservative Republicans tended to be isolationists.  They would have opposed on principle some of the efforts such as the Marshall Plan that were used to combat or limit the spread of Communism.  The isolationist/conservative wing of the Republican Party was largely headed by Senator Robert Taft of Ohio, and the other wing of the party, the globalist/moderate/establishment wing was headed by Thomas Dewey of New York. 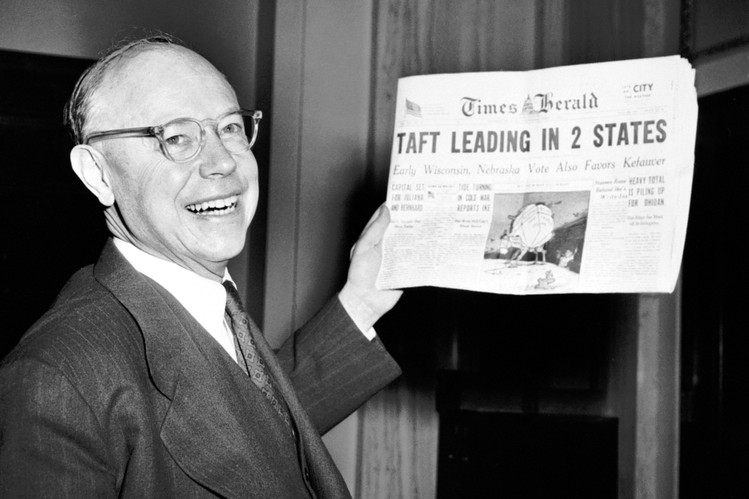 Before Goldwater or Reagan, the leader of conservative Republicans was Senator Robert A. Taft of Ohio, the son of President William Howard Taft.

By the time the 1952 election came around, the Republicans had lost the last 3 elections when it ran globalist candidates (Wendell Wilkie in 1940 and Thomas Dewey in 1944 and 1948).  One could count the losing Republican candidates in 1936 (Alf Landon) and 1932 (Herbert Hoover) as globalists, but the issues were a bit different in the 1930s.  The conservatives within the party wanted to finally see their man–Senator Taft–win the nomination.  The big issue was, “Could Taft win in November?”  Most political pundits and advisors thought not.

The man who dominated the political scene at the Presidential level in both 1948 and 1952 was General Dwight Eisenhower.  Democrats would have gladly nominated him in either of those election cycles.  So would Republicans.  But Eisenhower was coy, quiet, vague, non-commital, and unwilling to get into the race in 1948.  He played the same game early in the 1952 race, but then willingly entered the fray.  And, he entered the political arena as a Republican. 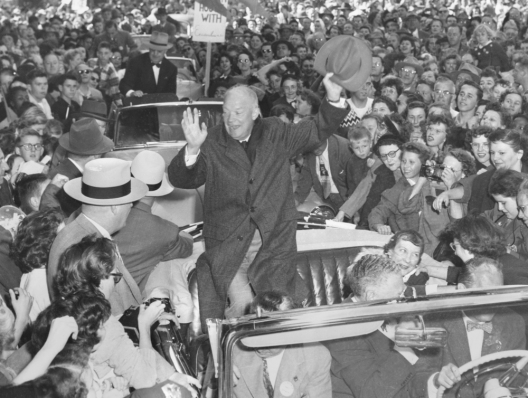 A combination of his winsome public personality and his military record helped Dwight D. Eisenhower win the Republican nomination and then the Presidency in 1952.

The Democrats had a dilemma.  Technically, in spite of the passage of the 22nd Amendment, incumbent President Harry Truman was eligible to run for a second full term (which would have given him nearly 3 full terms as President).  Although HST toyed with the idea of running, he faced great obstacles within the Democrat Party and an even greater challenge than he had in 1948.  Had he run against Eisenhower, he would not likely have repeated his surprise victory as he did in 1948.

The Democrats had several candidates who flirted with the nomination, but none seemed to be capable of winning.  Vice President Alben Barkley was too old (age 74 and nearly blind).  Senator Richard Russell was too southern to please the northern wing of the Democrat Party.  Fellow southern Senator Estes Kefavuer was not southern enough on racial issues to keep the south from reverting back to the Dixiecrat movement of 1948.  Averell Hariman of New York was too liberal.

The most attractive candidate (since Eisenhower declared himself a Republican) was Illinois Governor Adlai Stevenson.  There were a few problems with Stevenson, however.  First of all, he was divorced, and in 1952 that was awkward–to say the least–for a Presidential candidate. Second, he was indecisive.  He had tested governing skills and leadership abilities, but he was not prone to make the tough decisions in a timely way and stick to them.  Greatest of all, he did not want to run.  In fact, he was drafted by the Democrats at their convention.

This later picture of 2 time Democrat Presidential candidate Adlai Stevenson became famous for the image of the worn out shoe he was wearing.

Both parties went to their nominating conventions in the summer of 1952 without knowing who would be the nominees.  Republicans supporting Taft had an edge going in to their convention, but the Eisenhower forces overcame them to give Ike the nod.  The Democrat Party was in worse array, with the Truman legacy, scandals, and too many years in power.  The reluctant Stevenson finally emerged as the candidate.

In contrast to the angst many of us felt about the 2 major party candidates this year, both parties in 1952 nominated talented and capable men.  Even though Stevenson became the darling of the liberals, he was a fiscal conservative and somewhat partial to states’ rights (and he was proud of his family connections in the south).  Eisenhower, with no elective office experience, proved to be an apt politician with proven leadership skills. The rejected Republican candidate Robert Taft was a man of strong principles and abilities.  Although not many were happy with him in 1952, Harry Truman was a strong and good leader.

Nothing in the preceding paragraph is meant as an all out endorsement of any of the men mentioned.  They had their flaws–personal and political–but all were honorable men who could have led the country well.  But one man won and it was because, as the title indicates, America liked Ike.

President Harry S Truman flashes his famous smile. Surrounded by microphones, he lacked a lot in his speaking style.