I find books about Adolph Hitler and Joseph Stalin depressing.  I am sure that I would find books about Mao Zedong, Fidel Castro, and Pol Pot equally depressing if I read them.  I can grasp how leaders can be vengeful, ambitious, overly aggressive, and obsessed.  Pure evil is harder to fathom.

With Hitler, it takes lots of patience to navigate the political and social turmoil of the Germany he came to rule.  It takes effort to figure the effects of World War I on the people of that time, the machinations of the German government, and the deep-seated roots of anti-Semitism throughout Europe.  But understanding and even feeling the pain of a nation defeated in war doesn’t enable me to make the leap of sanity needed to grasp great crematoriums burning the bodies of people killed for their race or religion or political opposition.

The ugliness of World War II battlefields at least holds out certain consolations.  There is the pluck and bravery of the Royal Air Force and the pilots flying their Spitfires against the German bombers.  There is the incredible salvage operation during the Battle of Dunkirk.  There are the virtuous Germans, such as General Rommel, “the Desert Fox” or Colonel Claus von Stauffenberg.  There are the Russians in Leningrad who survived a siege of nearly 3 years.  America’s “good war,” which produced “the greatest generation,” offers plenty of uplifting stories of men, women, and an entire nation.

There were plenty of evils on the battlefields of Europe and the Pacific.  There were atrocities, violations of the rules of war, and unnecessary and wanton destruction of lives and property that did not shorten the war.  But still those matters can be grasped and grappled with.  Gassing Jews, conducting evil experiments on children, and hanging political opponents with piano wire falls into a much deeper and more horrible circle of Hell.

Hence the Hitler problem.  How can a political science student or reader classify this man who was an extreme nationalist, a demagogue, and a tyrant alongside other fault-laden politicians of history?  How can a military historian explain the priority given to trains transporting people to concentration camps when German armies were being chewed up on three different fronts?  How can the sociologist or psychologist deal with a culture where people went to work each day routinely killing masses of people?

Even as a Calvinist looking at history with the strong conviction that we are sinners, warped and ruined and depraved and wicked to the core, still there is the Hitler Problem.  And he wasn’t alone.  For all those reasons, all too many of my volumes weighing down book shelves with the name “Hitler” or “Third Reich” or “Nazi” are avoided.  Yet, truth demands looking at the ugly, the wicked, and the false premises under-girding a world in sin.

I suppose everyone who decides to major in history in college and then to teach history came in through the various doors promising excitement and good stories.  Great battles, great men and women, heroes and heroines, romantic causes and the like lured us into the field.  The bright and shining figures still exist for me, but there are other aspects that are grim.  There is the miserable death count that teaching history entails.  At some point, the 147,234 deaths in this event and the more than 3 million total deaths in that event leaves the teacher, student, and reader numb to the reality.  I have never even known that many people.  The deaths of friends, family, and acquaintances depresses me. Holocausts and genocides are unthinkable, except that the history teacher is a messenger–Clio plus Hermes–so he must bear the bad news.

It is for these reasons that I am thankful for Richard Weikart and historians like him.  I first became aware of him when I read and reviewed his book From Darwin to Hitler, Evolutionary Ethics, Eugenics and Racism in Germany.  I thought it might be useful, but I found it more than that.  It was astounding.  That book led me to a companion volume and follow-up titled Hitler’s Ethic: The Nazi Pursuit of Evolutionary Progress.  Dr. Weikart and I began occasionally corresponding after I became aware of these two works.

This past year, Weikart’s book The Death of Humanity and the Case for Life was published.  I reviewed it and some other books HERE and HERE.  The Death of Humanity is a serious examination of some of the key thinkers and most faulty thinking that has struggled for the soul and culture of Western Civilization in recent centuries.  Weikart’s book is a good supplemental, more in-depth study of what Francis Schaeffer attempted in How Should We Then Live? 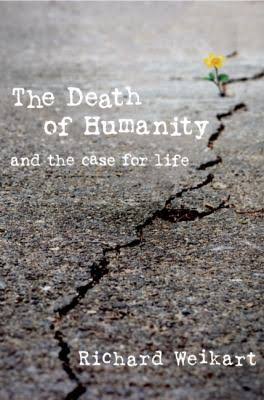 Now Richard Weikart has yet another very important new book out.  Titled Hitler’s Religion: The Twisted Beliefs That Drove the Third Reich, this study examines the speeches, private conversations, writings, and actions of Adolph Hitler relating to religion.

First,  Hitler’s religious beliefs were part of a wider set of beliefs that made up his worldview.  Surely, he duped lots of folks.  Truth-telling was not his forte, but there was plenty that could have been known from his writings, particularly Mein Kampf.  Hitler bought into the dark side of Darwinian naturalism for certain.  I know that the Darwin-Hitler link is a point of controversy, as is the Hitler-Nietzsche link.  Hitler was not a profound thinker or systematic organizer, but he did absorb bits and pieces of ideas that coagulated into his warped worldview.

Second, Hitler is sometimes labeled a Christian and/or a Catholic.  Of course, he was Catholic by birth–as were most Gentile Austrians.  Likewise, he picked up on some Christian concepts, such as Providence, that he made reference to.  But, as this book demonstrates repeatedly, Hitler despised Christianity in all forms–Catholic or Protestant.  He was a politician in a country with a Christian heritage, and so he sometimes crafted language and actions in ways to either appeal to or disarm the residual Christianity in his culture.

Third, sometimes Hitler is accused of being a Satanist or part of the Occult.  It is fair enough to label his actions and hatreds as Satanic, but he was not a Satan worshiper.  There were elements of the Occult in Germany, but the Third Reich was not an Occult Regime.

Fourth, everything being weighed and put in the mix, Hitler was–like all people–religious.

Allow me to copy off of someone else homework for a moment.  This is from Gary Scott Smith’s excellent review of the book:

Weikart argues that Hitler is best understood as a pantheist, one who believes that nature is God and that the cosmos provides principles to guide human conduct. He frequently deified nature, referring to it as eternal and all powerful. One of the reasons it’s difficult to determine Hitler’s actual beliefs, however, is that he said different things in public than in private, like many politicians, and because he often portrayed himself as a pious Catholic and applauded Christianity in his speeches (especially before the late 1930s) to gain political capital, public approval, and greater popularity. Moreover, Hitler was a “religious chameleon” and notorious liar who continually obfuscated to serve his purposes. Most Germans who joined the Nazi Party or at least voted for Hitler professed to be devout Christians, and many even saw him as protecting Christianity from the threat of godless communism.

Therefore, this book goes beyond the mere question of what box Hitler would have checked on a form asking for his religion.  He himself would have asked himself what he would gain from checking certain boxes.  He was “a believer.”  He was a man who was compelled by a set of doctrines to pursue his goals.  Certainly his pantheism mish-mashed religious mix credited him with a key role in purifying “humanity,” meaning Aryan peoples.  Worldviews, philosophies, presuppositions–both those spoken and those assumed, scientific trends, the need for scapegoats, and the warped to desire to create a utopia are all dangers that lurk out in the darkness, but out in the open as well.

This book is a testament to the importance of serious historical examinations of how thoughts lead to actions.

Another recent book I read on Hitler was the short biography, simply titled Hitler, by A. N. Wilson.  This book gives just enough biographical information and discussion of the events in Hitler’s life to equip the reader without excessive detail.  And, Wilson does a credible job of dealing with the laziness, incompetence, speaking power, and surprising successes (at least up until late 1941) of Hitler.

Even as the evils of World War II overwhelm the reader, there are those stories of heroic people who stood against the terrible regimes or did some small part to relieve suffering. One such account that is most appealing, although grim, is the book A Polish Doctor in the Nazi Camps–My Mother’s Memories of Imprisonment, Immigration, and a Life Remade by Barbara Rylko-Bauer.  This woman chose to go into the concentration camps to serve as a doctor.  We need these reminders that evil never ultimately wins.  This book was published by the University of Oklahoma Press.