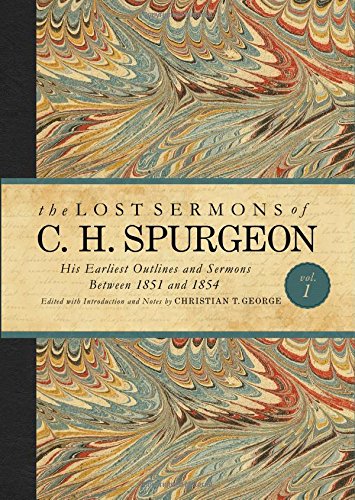 It turns out that the correct quote is as follows:  “Sell all that you have (not least of all some of your stock of current sermonic literature) and buy Spurgeon (even if you have to grub through the second-hand bookstores).  The statement was made by German pastor Helmut Thielicke in the book Encounter With Spurgeon.  It was in the midst of grubbing around through some second-hand books years ago that I picked up a cheap and decent copy of Thielicke’s book.  Most of his book consists of selected Spurgeon pieces from Lectures to My Students.  For that reason, I shelved the book–which cost about 50 cents–and neglected until yesterday.

Thielicke’s 45 page introduction or case for reading Spurgeon is an excellent exhortation and coverage of the man and his influence.  But, anyone who writes about Spurgeon faces the inevitable challenge:  How can you say enough about the man?  This is not hagiography or creating a mythical near-perfect man.  He had his faults and limitations, but he was incredibly balanced in his ministry and life.  And productive.  His writings total more than the Encyclopedia Brittanica.  His church was a mega-church and a number of ministries sprung from it.  Spurgeon’s sermons and writings were best sellers in his day, and his books still sell today.

The phrase from Hebrews–“though being dead, he still speaks”–is often used of Spurgeon.  It is not as though his readers then stand in pulpits and present Spurgeon like sermons.  (Nor would we read Shakespeare in order to pattern our every day conversation after him.)  The main challenge of a preacher is not finding words to say.  If you cannot speak and are not loquacious, you probably are not destined for the pulpit.  (Although we have all longed for certain sermons to end more quickly.)

The main challenge of a preacher is listening.  The preacher’s mind is gathering bullet points for the sermon, picking up exegetical details on the text, absorbing and improving upon the commentaries, fashioning the order of the sermon, finding the perfect beginning and ending, and thinking through who will be sitting in the congregation and how the sermon will or should impact them.  Think, think, think, read, read, read.  That’s all part of the life of ministry.  But the preacher–far more than the lowliest congregant–needs to be preached to.  He needs to hear.

Of course, preachers need to listen to God from His Word.  But God always blesses faithful proclaimation of His Word.  And God uses means–often men–to bring His message to us.  The preacher, hopefully unlike the doctor, is sicker than the congregation.  He has time to know more, focus more, and be discipled more, but the minister’s responsiveness is dull.  Simply put, having read what I have read for the past 40 plus years, I ought to be spiritually pure and righteous and perfect in the sight of God and man. (Remember James 3:1– Not many of you should become teachers, my brothers, for you know that we who teach will be judged with greater strictness.)

This again recalls the importance of having Spurgeon’s works, reading Spurgeon, and selling other goods in order to buy Spurgeon.  There are 3 (and who knows how many more) examples I might appeal to.  These 3 men have all been pastor/examples/mentors to me along the way.  First, Henry Wood who introduced me to Calvinism and Spurgeon, Warfield, Gordon Clark, Loraine Boettner, Gregg Singer, R. J. Rushdoony, and so much more.  Prominent on his bookshelves was his set of Spurgeon’s Metropolitan Tabernacle Pulpit.

Mr. Wood encountered Calvinism while a student at Ouachita Baptist College.  Somewhere along the way, someone gave the modified version of the Thielicke quote as advice to him, saying “Sell your shoes and buy Spurgeon.”

Then there is the respected and revered Pastor Mickey Schneider, who now lives in Florida.  I first heard Pastor Schneider in the summer of 1980 while I was taking a couple of courses at Reformed Theological Seminary in Jackson, Mississippi.  Mickey was pastoring a Presbyterian church in Jackson and was preaching through his favorite book, Ecclesiastes.  His sermon was on Christian education, and I was already committed to that, but was further confirmed in that conviction.

It would be many years before mine and Mickey’s paths began crossing again.  He has been here in Texarkana on several occasions to preach (and visit his daughter).  He is Mr. Southern Presbyterianism, in my view.  He has met every one, known them, shared vital experiences with them, and either stood alongside them or opposed them along the way.  Who else watched Martin Luther King, Jr.’s “I Have a Dream” speech with Cornelius Van Til (who was in a bathing suit about to go swimming)?  Who else wandered around lost in Jackson, MS with R. J. Rushdoony as his passenger?

Here is Mickey Schneider’s comment about Spurgeon’s works:  I purchased the 63 volumes of The Metropolitan Tabernacle Pulpit gradually over the years, and they are still on the top shelf of my office across one whole wall, next to my bust of Charles H. Spurgeon and the textual and topical index. I still refer to regularly, though many in our circles would disdain him. You don’t go to Spurgeon for exegesis – sometimes he is terrible! But you go to him for life and power and illustration and application. When I go over a sermon beforehand with Judy, she might say, “You’d better get something from Spurgeon on this one!”

Mickey (sometimes Michael and, at least once, Arthur) Schneider alongside his wise ministerial counselor and wife, Judy.

And then there is George Grant, prolific author, pastor, conference speaker, and one of the most sought after lecturers of our time.  George commented on my previous Spurgeon blog saying, “This is a great survey of where to start with Spurgeon–but, everyone should be forewarned: if you start Spurgeon you will spend the rest of your life reading him! And, you’ll never exhaust the supply of fresh, rich wisdom.”

George also listed Spurgeon as being among the authors now deceased who he is determined to read in their entirety.  It would be tricky to find a book by or about Spurgeon that Grant has not long since read.  His shared–was it to make me covetous?–a picture of his set of Spurgeon’s sermons–“strategically located across from my desk.”

This is all background to my having started on reading The Lost Sermons of C. H. Spurgeon, edited by Christian T. George and published by B&H Academic.  This first volume costs a bit, but it is worth the money.  First of all, it is a beautiful volume–both inside and outside.  (Please don’t let me know if you acquire a kindle version of this.  That would be like having a kindle version of a great work of art.)  There is something, no a lot, to be said for owning really nice hardback, beautiful editions of books.

Second, the foreword by David Bebbington, the editor’s preface by Dr. Christian George, the timeline (a really fascinating survey of the 19th century), and the biographical information are all outstanding.  Did you know that Mark Twain went to hear Spurgeon preach?  (I keep holding out hope that Mr. Clemons was converted by the end of his life, but the evidences are few and far between.)

This Lost Sermons series–and we only have volume 1 available at the moment–will increase the amount of Spurgeon materials by 10%.  Astounding, especially considering how relatively short Spurgeon’s life was.

My recent Spurgeon quest has already had yet another benefit.  I have gotten re-acquianted with Pilgrim Publications in Pasadena, Texas. Started by Bob Ross, who is still active in this book ministry, Pilgrim has been re-printing and publishing Spurgeon’s works for decades.  In fact, the Metropolitan Tablenacle Pulpit–as pictured above and below–is one of the major productions of this organization.  They also publish The Treasury of David in seven volumes, rather than the 3 volumes that Baker publishes.  What is the difference?  Mary Barber of Pilgrim explained it.  She writes, “The one from Pilgrim is unabridged, unedited, word for word in both typeset and design, reflecting the original Passmore and Alabaster editions first published by Spurgeon.”  Oh my, even the Spurgeon books I do have aren’t enough!

Pilgrim also publishes the rich New Park Street Pulpit, which consists of sermons from an early (but not the earliest) stage of Spurgeon’s preaching.  These sermons are often the most quoted in conjunction with Spurgeon’s Calvinistic convictions.

The conclusion of the matter is simple:  I must have the Metropolitan Tabernacle Pulpit.  The one volume I own is not enough.  Until then, I am going to continue reading and enjoying Thielicke’s Encounter With Spurgeon and The Lost Sermons of C. H. Spurgeon.

Also, I have some items for sale.  Any one interested?