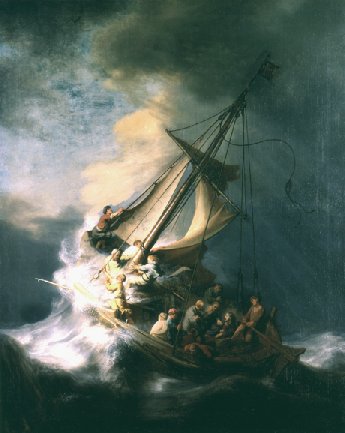 Today is Good Friday and there is no better time than today to remember that we live in troubled times.  The phrase “troubled times” might even be redundant because, to tweak Dickens’ memorable phrase, even the best of times are also the worst of times.  I just finished reading Jay Winik’s fine book 1944 FDR and the Year That Changed History.  Not only was the world at war that year (and victory for the Allies was in sight), but the Holocaust was at its worst levels.  The destruction of the German military was proceeding rapidly, but so was the destruction of the Jewish people in Europe.

So, all times are troubled times.  There never was a Golden Age and the “Good Ole Days” never really happened, although many of us can wish for some of the benefits of youth.  The world is sinful and sin-filled.  Like the recurring creatures in Beowulf, the destruction of one evil always leads to the emergence of another.  The Cold War was won without a major hot war, but the world is now faced with radical Islamic forces (who threaten not just us but fellow Muslims) and Russia does want its 1980’s foreign policy back.

Some of my recent readings have had a focus on troubles, although the emphasis has been on domestic and moral issues rather than international problems.  The contributors toward the discussion have been Christians from different backgrounds and perspectives.  None have offered any easy way out.  As it happens, my Humanities class has been reading The Consolation of Philosophy by Boetheius.  Philosophy in that account is a woman who comes to give comfort to Boetheius who is in prison awaiting execution.  Her answers, although laden with much Greek philosophy, are Christian.  She doesn’t give him a file and a saw so that he can escape prison and execution, but rather a way of seeing above and beyond the immediate dire circumstances.

The Minor Prophets of the Old Testament have much to say to us in our current age.  Apart from Jonah, they don’t get much play time on Christian life patterns.  But the Minor Prophets are still part of the inspired, infallible, authoritative Word of God and they are minor only in the sense that their messages are relatively short.  Also, they speak God’s judgement and grace to sinful people in sinful cultures and conditions.

I recently completed the reading of The Message of the Twelve: Hearing the Voice of the Minor Prophets by Richard Alan Fuhr, Jr. and Gary E. Yates.  This book is published by B & H Academic, which is currently publishing quite a few outstanding works including The Lost Sermons of C. H. Spurgeon. 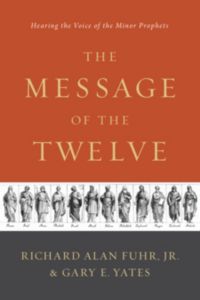 When I was reading The Message of the Twelve, I kept thinking that it was a good and useful book.  Then I realized that I should be reading the Minor Prophets along with the text.  That increased the usefulness of the book exponentially.  This is a work I need to pull back off the shelves each time my Old Testament readings reach those last twelve books.  It is useful for outlines, commentary, and overview.  It could be used for personal study, preaching helps, or a classroom.  And like most all good resources, it contains a good bibliography and other references to more in-depth studies of particular prophets.

To restate the main contention:  We live in times where we need to hear and apply afresh the prophetic word from the Minor Prophets.

Being that there never was a time when the Church just sailed along on untroubled seas, church history provides lots of helps for us to use.  One of the greatest works from the Middle Ages is a short, very readable little collection of guidelines for Christian living called The Rule of St. Benedict.  The pro’s (mostly historical) and con’s (mostly Biblical) of monasticism can be debated elsewhere.  Any fan of the Protestant Reformation and its Solas will find great encouragement in the Scripture-soaked message of this work.

The message and ministry of Benedict has received quite a bit of attention lately due to a new book and an idea that has been debated over the last several years. The book is The Benedict Option: A Strategy for Christians in a Post-Christian Nation by Rod Dreher.

The key concern of this book is the cultural breakdown and impending anti-Christian cultural and legal dangers.  The Supreme Court rulings on marriage, issues relating to homosexuality, the politics of our time, and many other factors don’t bode well for Christian living.  As these forces press in on the Christian community, the need to respond is urgent.  Dreher has lots of suggestions and ideas about how the Christians can take cover and recover amidst all this.

A major criticism of the book is that it is calling for a retreat, to a degree.  P. Andrew Sandlin has a well written critique of the book titled “The Cultural Mandate, Not Benedict Option.”   Andrew’s review is just one of many–both pro, con, and mixed–of this book.  For my part, while agreeing wholeheartedly in the Cultural Mandate trumping the Benedict Option, I still appreciate Dreher’s book.  There is much to be said for his suggestions.  Building stronger Christian communities, educating our children in Christian schools, and shunning the trends and patterns of ungodly behavior are all commendable.  Take note that this book is “a strategy” and not “the strategy” for Christian action.

The Benedict Option is a worthwhile read.

For quite a while now, Albert Mohler has been on the cutting edge of cultural and theological issues.  How he has managed to preside over a major seminary and bring reformation to it while speaking and writing to a nation-wide audience is beyond me.  I finished reading his book We Cannot Be Silent today.  As the subtitle notes, this book is about “speaking truth to a culture redefining sex, marriage, and the very meaning of right and wrong.”

This past week, which is often called Holy Week, I kept thinking that this was just not the right book to be reading in the days leading up to Easter.  Certainly a book about the life or teachings or passion of Jesus Christ might have been a better choice in some respects.  But We Cannot Be Silent was also a useful read because it reminds us of the sinful world that Jesus came to save.

Without being crude or graphic, this book depicts the moral pit our nation has fallen, or rather willingly jumped into.  From politics to court rulings to movies and the ever changing rules of politically correct thought, we are in a whole new ballgame.  It was not very many years ago when liberal Democrat candidates for high office were politically sympathetic toward same-sex unions, but were still affirming that marriage was between one man and one woman.  Al Gore of Election 2000 was closer culturally with Charlemagne than Democrats and many Republicans are today.

Christians have to weigh through lots of options, forums, and actions on the radicalization of the sexual revolution.  And the Christian community has need of intense repentance and reform within our own ranks.  This is not a feel-good book.  It is a prophetic call to wake up.

And since it is Good Friday, I started reading N. T. Wright’s new book The Day the Revolution Began: Reconsidering the Meaning of Jesus’s Crucifixion.  Not only was the opening chapter quite good and edifying, it was helpful for me to realize that this day in history marks the day the world changed.  The problems are still piled up higher than we can fathom, but sin has been dealt with.