I was recently listening to a cassette tape  from the Easy Chair series that R. J. Rushdoony did, often with Otto Scott.  In this talk, Otto Scott commented on Homer’s Odyssey, saying, “When I read The Odyssey, I am a twelve year boy old again.”  I loved that comment, even though I did not read and love Homer’s epics until much later.  For me, it is such books as Jesse Stuart’s Hie to the Hunters  that recreates that feeling.  There were other books I loved such as Smokey–The Cow Horse by Will James and The Dog Who Wouldn’t Be by Farley Mowat.

Also, every time I teach through The Adventures of Tom Sawyer, I find myself wishing I could sneak out the window of the classroom and go join Tom and Huck on Jackson Island and play pirates all day.

A few years back, my son Nate and I enjoyed reading Scout: The Secret of the Swamp by Piet Prins.  Published by Inheritance Press, out of Canada, this series told of the adventures of a young boy and his German Shepherd dog Scout.  In spite of being a German Shepherd, Scout is totally committed to the Dutch people and the Christian family he is a part of.  Inheritance Press publisher Roelof Jannsen brilliantly published this book along with his catalog together.  It led to several good book purchases, including more volumes of the Scout Series.

The book with a hook. Read it and you will want all of the series.

You might be surprised that I grew up in a home that did not have many books.  I only randomly and haphazardly picked up hints and helps as to what to read.  In our house, we had lots of old Reader’s Digest magazines, along with Texas Horseman magazines, and we had a copy of a book called None Dare Call It Treason, which always seemed scary to me.  I did check out books from the school library, but never read the Hardy Boys, any Henty books, Edgar Rice Burroughs, or other authors I should have digested before I went to high school.

Long life and a desire to learn calls for frequent repentance and acts of penance.  While I have acquired a decent amount of book smarts, there are still so many authors I barely know and book titles I may not recognize.  We won’t even begin to think about books I read that should be read again.

I recently received a beautiful little book titled Frank on the Prairie by Harry Castlemon with additional illustrations by Charles M. Russell.  The book is published by one of my favorite sources–the University of Oklahoma Press.

The University of Oklahoma Press website states that they publish scholarly books, “especially Native American studies, classics, natural history, and regional interest titles.”  That is certainly true, and I have enjoyed many of the classical studies and the Campaigns and Commanders series, which has over 50 current volumes with more to come.

But they also publish books that the average reader, who has no academic pursuit in mind, can read and enjoy.  A few months back, I reviewed Horseback Schoolmarm, Montana 1953-1954, which I and my wife both thoroughly enjoyed.

Frank On The Prairie is also going to be a fun book.  (I am still early into it.)  It is a reprint (the original book came out in 1869) of an author of adventure books for boys named Harry Castlemon, who was the most popular author of boys adventure books in the late 1800s .  The review on the website says this:

The prolific author of the novel Frank on the Prairie, Charles Austin Fosdick (1842–1915), who went by the pen name Harry Castlemon, was one of Russell’s favorite storytellers. Castlemon’s book, which first appeared in 1868 as part of the Gunboat Series of Books for Boys, recounts the adventures of young Frank and his friend Archie as they travel across the Old West. 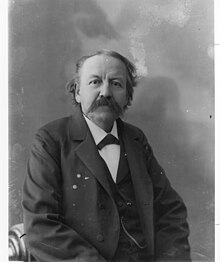 Charles Austin Fosdick, who wrote under the name Harry Castlemon

In this case, there was a boy named Austin whose uncle was Charles M. Russell, the man who was one of the greatest artists of the Old West.  Russell was also a fan and collector of Castleman’s “Frank Series” (there were at least 9 books about Frank).  Uncle Charles borrowed Austin’s book and later returned it with eleven watercolors and a pencil sketch detailing events in the book.

I find myself astounded and in awe of that.  You see, I don’t really like loaning books unless the borrower is as careful as I am.  I sure don’t like when they mark up the book or do things to it.  (I don’t even want them to let sunlight get to it.)  But this would be like loaning a book of poetry to C. S. Lewis and having him return it with notes in it.  Or loaning a book on World War II to Churchill and him marking the places where he was present in the story.

This book is a great adventure story.  After all, if you have two young boys who are heading out west–the book depends heavily on Francis Parkman’s Oregon Trail–and the book is not adventurous, then you ain’t no writer!

Add to that, the greatest artist of the Old West just happens to enhance the book with illustrations.  It just doesn’t get much better than this.  This fine book has been published now–illustrations and all–in a beautiful, facsimile hardcover edition.  This is a book for collectors, lovers of the Old West, lovers of boys adventure stories, and lovers of fine books.

Yea, it is not being given away, but it would be a great investment for any book lover and would be a great gift to young people who need some good reading.  It would also be good for all of us who want to feel like we are twelve again.

Proceeds from the book will go to the C. M. Russell Museum–The Art and Soul of the Old West in Great Falls, Montana.

Postscript:  Harry Castlemon wrote,  “Boys don’t like fine literature. What they want is adventure, and the more of it you can get in two-hundred-fifty pages of manuscript, the better fellow you are.”