I admit it:  I was wrong. I simply did not buy Robert Farrar Capon’s books or read them.  I had what I thought were good enough reasons.  First of all, I had “not heard of him.”  Of course, you cannot actually say that you have not heard of someone when you are told of them.  But there is a sense that develops that everything worth knowing about–well, I already know about it.

Then there were the two witnesses on behalf of Rev. Capon’s books.  One was Randy Booth, who praised the books to the hilt in some blog posts a few years back.  But I discounted the praise and recommendations.  Mainly it was because Capon wrote extensively about food and cooking.  I don’t care much for either.  Rev. Capon was a pastor, author, theologian who wrote about fine foods, the right wines, and proper dining.  Randy Booth is actually a chef who does theology on the side.  I suspect he devotes no more than 60 to 80 hours a week to church and pastoral duties, leaving him the rest of the time free to creating and serving up meals.  Food always makes me feel a) guilty, b) sick, or c) disoriented.  So I pushed Capon over into the list of authors that include Martha Stuart and those Frenchmen who write about cooking with wine.

In 2013 when Rev. Capon died, George Grant wrote something somewhere about Capon’s books and how good they were.  But I often find it worthwhile to disregard Dr. Grant’s book prescriptions.  Here is what I noticed:  When you randomly come up with a book and ask Dr. Grant about it, he says he read it, read several others by the same author, and prefers the works of someone else (whose works are out-of-print) to the author under discussion.  For example, I might ask, “What do you think of Orlando Figes’ book The Crimean War: A History ?”  He would answer, “It is okay, but Figes’ book Natasha’s Dance is, in my opinion, much better.  And on the Crimean War, I prefer Mark Adkins’ The Charge: The Real Reason Why the Light Brigade Was Lost.”

So, in spite of the “testimony of two witnesses,” I marched on my merry way sans Capon.  But then I was out hunting one day last winter.  In a particular place here in Texarkana, there was a store that had a selection of used books, and on this day, they were on sale for 50 cents each (or maybe a dollar–I cannot remember).  I bought several books, including a nice looking edition of Bed and Board by Capon.  It looks like the one below, except it does not have the ugly library markings.  It was cheap, in great shape, pleasant to behold, and might enable me to prove my indifference to the author’s works. 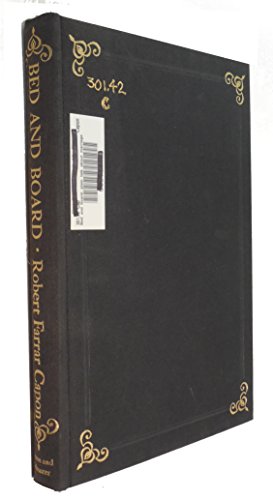 In a further unprecedented situation, I started reading the book.  It is very disturbing to have one’s understanding of an author challenged by reading the author himself.  It is far better, from my personal experiences, to know about Plato, Aquinas, Edmund Burke, T. S. Eliot, John Calvin, and others by reading someone else’s extensive one page–or even better, one paragraph–description of them, especially if it is dismissive.  Reading authors is a troubling affair.

In the case of Rev. Capon, I discovered that this book, titled Bed and Board, which is about marriage and family, is witty, thought-provoking, ordinary–in the sense of the every day experiences contained in it, and totally realistic.  He actually describes the experiences of life as they are.  That sounds pretty miserable, except that he has such a facility of expression, such a different way of looking at things, and such a happy, healthy reminder of joys that the book makes you think you are seeing these things–such as having a wife, having children, living in confined quarters together–for the first time.  And, it is not just delightful prose, but solid Christian instruction as well.

I did not mark in the book, for it is too nice looking a volume, but I did note a few passages.  Consider:  “The only available candidates for matrimony are, every last one of them, sinners.”  Pretty obvious, except that nearly 26 years of marriage and over 20 years of pastoral counseling reveal that sin is quite surprising to many when it shows up in their marriages.  It gets worse (or better): “The parties to matrimony should be prepared for its being, on numerous occasions, no party at all; they should be instructed that they will need both forgiveness and forgivingness if they are to survive the festivities.”  Yep and “amen.”

Then there is a reference to old books that I found appealing–since it was in my bailiwick:  After citing several older authors on marriage matters, he says, “Keep at it (that is, reading these books) until the horse sense that makes them ageless breaks through the oddness that makes them antique.  It is a tough job, and the devil has seen to it that most of the books are either out of print or mighty unattractive.”

That is a great statement about reading “old books,” which I am sure that C. S. Lewis would approve.  Thankfully, more and more such books are back in print and often in attractive, readable editions.

Concerning the Christian mind, or the ways that Christians think (or don’t), he says, “Of course, in religion and morals it (the Christian mind) tried to do its own cooking; but across the rest of life–schooling, housing, marrying, working, playing, spending–it has been content to buy whatever packaged mixes were available on the shelves of the secular idea market.”

And that leads to this: “The result is that Christians, who would like to think they were different, have only succeeded in making themselves indistinguishable.”

I could cite page after page of the book, but this is a blog, not a reprint.

So, I was wrong–again, as those closest to me would remind me.  I now must begin the difficult, but rewarding labor of hunting and gathering the books of Robert Farrar Capon.