Karl Barth–What a topic to tackle.  He is more than a man, for he is a subject, a whole realm of discussion.  Ranked by some as one of the greatest theologians of the twentieth century, he is despised by others for being a heretic.  His influence was great, but his legacy is and always will be under fire.

Here is the story of my slight connections with the esteemed Herr Doktor Barth:

I became a follower of Reformed theology around 1976.  I was not familiar with any theologians.  I had heard of Wesley, since I was a Methodist.  I knew of Martin Luther, but was unclear as to who he was.  Then I was suddenly pushed into the deep end of the pool and was surrounded by a such names as Hodge, Edwards, Calvin, Knox, Zwingli, Kuyper, Berkof, Lloyd-Jones, Rushdoony, Boettner, Van Til, Clark, Machen, Spurgeon, and more.  These were all the good guys; they were our team.

My main focus in reading quickly became fortifying my grasp of God’s sovereignty and the doctrines of grace.  I was buying and reading books like crazy.  One of these best sources was a place called Presbyterian and Reformed Publishing Company.  Each month, they sent out a one page (front and back) sheet advertising books.  At the bottom of the second page were the sale books.

One such sale book was Karl Barth’s Theological Method by Gordon Clark.  I think I paid a dollar for the hardback copy of the book.  It went to my ever expanding shelf of books on theological matters and has relocated many times, but is still part of my meager library.

Many years later, I bought Christianity and Barthianism by Cornelius Van Til.  I am sure I must have bought it because i) it was a book, ii) it was by Van Til, and iii) it was a big influence on R. J. Rushdoony.  It has lived its life among my other Van Til books. 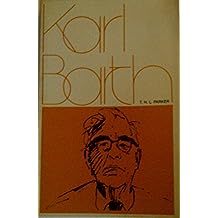 Then in some now-forgotten book purchase, I picked up a short biographical work on Barth by T. H. L. Parker.  I loved Parker’s biography of John Calvin, so I figured there was some worth to this book.

Thus, I was fully armed for any future confrontations with Barth’s theology and Barthians.  But I was living in southern Arkansas, teaching school in a rural public school and being active in two different Reformed churches in the area.  I encountered all manner of theological arguments and argued with many people holding a wide range of religious ideas.  BUT NOT ONCE DID I ENCOUNTER A BARTHIAN or even a person who had read or liked Barth.

One year, I was in search of quotes regarding the resurrection of Jesus Christ.  (I think it was in conjunction with a series of Sunday school lessons on the person and work of Jesus Christ.)  Having found great quotes by theological heroes, I thought I should snuff out a few enemy quotes.  To my surprise, I discovered that Barth believed in the resurrection of Christ.  As time went on, I found great statements by Barth on other topics.  I also began realizing his role in signing the Barmen Declaration and his opposition to theological liberalism.

While I still encountered writers who had serious disagreements with KB, I slowly realized that he was no simple “black and white” theological figure.  I probably have a half dozen or more books by Barth now.  But here is where I am in the process:

On the one hand, I know there are some serious flaws in his theology.  I am wary, suspicious, and untrusting of his writings in general.  What those flaws are, I cannot personally articulate.  I would be an easy knock-out in a debate with someone who had seriously read Barth.

On the other hand, I know that Barth is highly regarded, respected, and loved for his theological insights.  What those great insights are, I don’t know.  Barth is like a grand piano to me.  I know it is a fine instrument, but I don’t have the means of demonstrating it.

In terms of my position–not knowing much–I am a lot closer to many theology readers than one might think.

This past year, I received two review books that are new English publications of Barth’s writings.  The first was A Unique Time of God: Karl Barth’s WWI Sermons.  This book is published by Westminster John Knox Press.

This is a really useful study of the period when World War I began, meaning the late summer and fall of 1914.  Many German pastors and theologians jumped on the war bandwagon and heralded the Kaiser’s troops as they marched off to glory.  More experienced slaughtered and horrors than glory as that war turned into a four year long trench-based battle of attrition.  Neither the causes nor conduct of that war were Christian, God-glorifying, or even in the best interest of the nations involved.

Barth’s work is a remarkable look at a man who went against the times, against many of his teachers from the past, and against his culture.  Pastor to pastor, I would tell him that he preached too many sermons in his opposition to the war.  This series basically lasted from August through December.  His church was in neutral Switzerland, but the congregation must have had a basic sympathy to the Germans.

While Barthian skilled theology students might enjoy seeing hints of Barth’s later theology in this work, I read it as a history student.  I thought it was a great example of a pastor confronting current events from the pulpit while primarily seeking to minister to his congregation’s spiritual needs.

Soon after reading the World War I sermons, I received a copy of The Epistle to the Ephesians by Barth.  This book is published by Baker Academic. 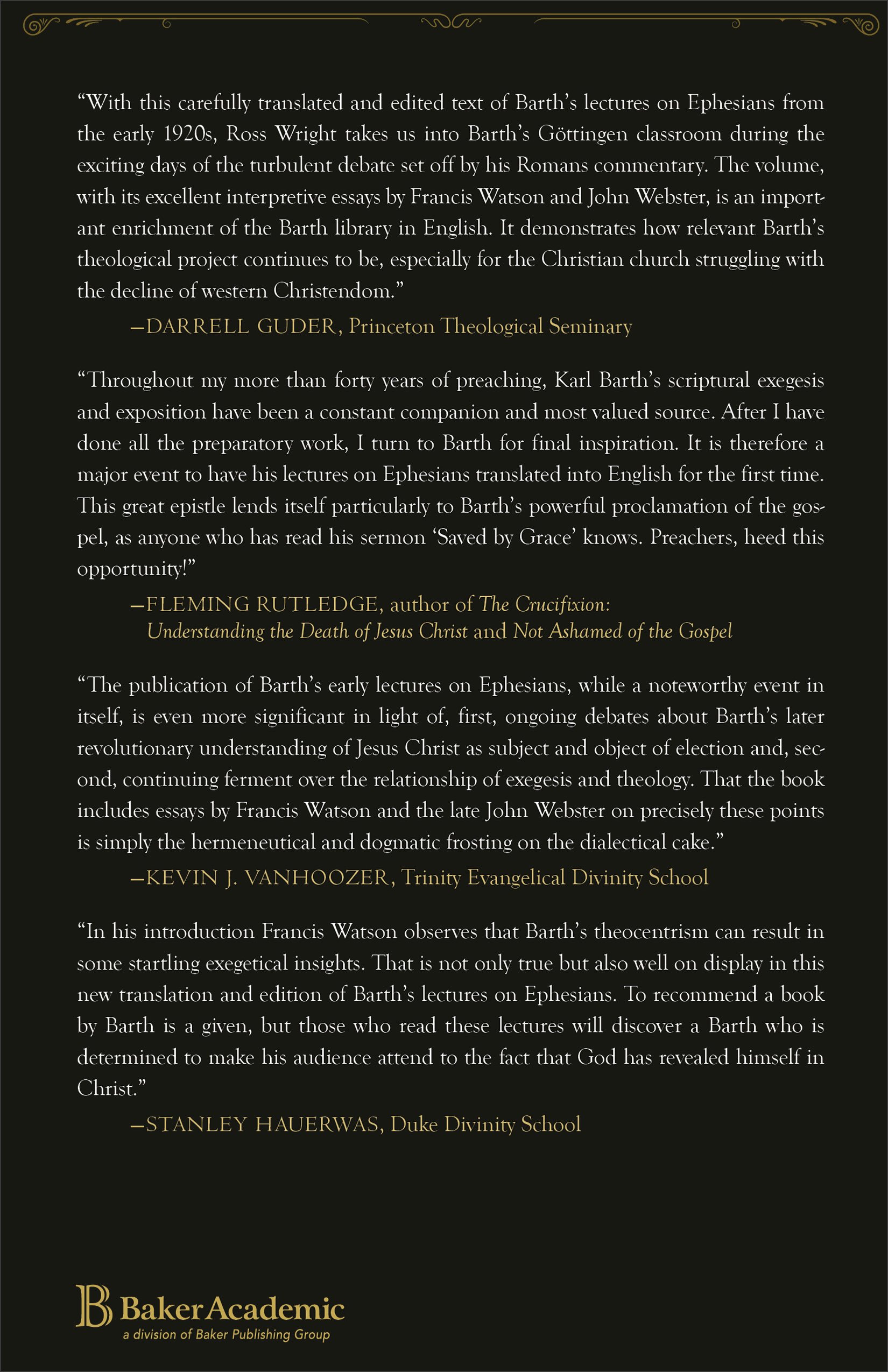 The back cover and blurbs. The front cover is at the beginning of this review.

The first fifty pages of this book consists of essays by the editor, the translator, and two scholars who discuss the lectures, Barth himself, and where his Ephesian lectures fit into his larger corpus of writings.  Barth was largely an academic theologian.  He was part of the long respected German theological tradition.  Remember that men such as J. Gresham Machen and Benjamin Warfield went to Germany to study theology, and while they rejected the theological deviations, they wanted to gain the academic training offered there.

Translation, a distance of a century, and changing theological currents all add to the challenge of reading Barth.  I am not a theologian by training, experience, or profession.  My academic training is more centered on history, so I am out of my league on these matters.  Still, I read some theological heavies for the same reasons that I listen to classical music, try to understand great art, and dabble in reading the great philosophers.

From my years of doing pastoral work and teaching in a Christian school, I have tended to go to the more accessible, readable, easy-to-find help sort of writers.  Stranded on a desert island, I would prefer the books of Sproul, Piper, or Grant to those of Barth.  But there is the need for me to tackle Barth on occasion.

The heart of this book is a series of lectures Barth gave during a winter semester at the University of Göttingen in 1921-22.  Most of the lectures were focused on Ephesians 1.  In fact, Barth scribbled notes in the margins of his lecture notes indicating that the class was complaining that he was too slow in getting through the book.  They were right.  After devoting many lectures to the first chapter of Ephesians, he then gives a brief survey of the remaining five chapters.

While reading this book, I was continually having to go back to the beginnings of the lectures where the Greek and English texts were located.  I can recognize very few words in Greek, and the lectures were detailed expositions of the Greek texts.  (Thankfully, the Latin phrases were all translated in the end notes.)

This was a plodding read, but IT WAS WORTH THE EFFORT.  In my previous experiences, this book would have not helped me find the quick exegesis, pithy quote, or keen insight into a verse to be lifted and used in a sermon.  But it is a good source for slowly, carefully thinking through this most rich chapter of God’s word.

Look for the scholarly reviews if you need to know the more academic theological assessments of this book.  I will close, however, with a quote or two that I found inspiring and helpful.

“And how astonishing that when the gospel of Israel’s Christ was directed to the whole world, it displaced so many rival claims at the time and met with such success!”  page 60

“The praise of God to which Paul refers is not a matter of course; it tolerates no rivals.  Such praise is directed to God, the Father of Jesus Christ, who reveals himself in his hiddenness and is the creator of all things.  It is an act of knowledge, of repentance, of transformed thinking.”  page 84

“How could the praise of God consist of words alone?  Words are inadequate, but so is action.  We can only cover our faces (‘crever les yeux,’ Calvin) and give God the glory.”  page 84

“Forgiveness is not a matter of merely excusing a person; the one who is forgiven is also made obedient.  The rule of God does not refer only to the dynamics of God’s action; God’s acquittal effects a corresponding dynamic in the creature, whose action is completely dissolved, reconstituted, and established on a new foundation.”  page 106

“How can we understand the meaning of the blood of Jesus, of his suffering and action in the passion, apart from the resurrection, which reveals their meaning?”  page 107

These are just a few of the many fine statements (often a paragraph or more in length) found in this study.

Post Script:  Recent articles dealing with Karl Barth’s life have contained the inexcusable story of his long-term affair with his secretary.  In short, he had a bad marriage, and he and his secretary lived in a sinful relationship (with his wife’s knowledge and, to some degree, acceptance).  This story is not hearsay, innuendo, or unprovable assertions.  No doubt this clouds the case for reading Barth.  I don’t blame anyone who refuses to read him or these books I have reviewed simply for that reason.

At the time I got these books, the affair was only a rumor.  It pains me when I read beautiful statements by Barth and realize his own failing.  Lord have mercy on all His people.