I never quite feel honest when people ask me what kind of work I do.  My career has mostly consisted of avoiding all things I consider as work and pursuing the things that I think are fun.  To satisfy the questioner, I say, “I am a teacher.”  That grand title covers the fact that given enough wealth and time, I would spend all my time reading and talking about things I like to read and talk about.

All of this discussion is leading up to this posting of some worthwhile books on and related to history that I have read this year.

Dr. Gottfried has authored a dozen or more books, many of which are on topics such as Marxism, Fascism, and political ideology.  He was a history professor at Elizabethtown College, and he still writes on historical topics.  A friend, John Pendergraft, newspaperman after the order of Douglas Southall Freeman, called my attention to the book last spring.  I felt duty bound to acquire a copy and see what it is like.

This book took two tries to get into.  The reason is that the book consists of fourteen essays that are ten to fifteen pages long and are serious, in depth, and challenging.  Add to that–really good.  Gottfried is, I think I can safely say, a conservative historical thinker.  But if you think that conservatism consists of what you hear on “conservative talk radio” or Fox News (which I like), then you are in for a culture and brain shock.

First up on the dock–actually, the second essay–is titled “Robert Nisbet–Conservative Sociologist.” This essay was explanatory of Nisbet’s thought and writings.  I have long owned several books by him.  P. Andrew Sandlin of the Center for Cultural Leadership has spoken of and recommended Nisbet’s books frequently.  This essay is a good preparation for reading a man who was a key conservative thinker in the twentieth century.  When I do my duty and read Nisbet himself, I believe this essay will be worth reading again.

Another outstanding essay is titled “Defining Right and Left.”  This essay is indispensible for doing serious political thought.  The terms “right and left” have been bandied about, used, abused, mis-used, and misunderstood in most political discourse.  A few sentences are worth citing:

“Although there is no evidence that many of the great conservative theorists of the eighteenth and nineteenth centuries…were orthodox Christians, their political worldviews would have been unthinkable without some kind of Christian theological foundation.”  page 31

“The Left has also benefited from being rooted in a Christian heritage….While the Right saw in Christianity a justification for settled authorities, the Left drew from it the vision of a world in which ‘the first would be last’ and ‘the meek would inherit the earth.'”  page 32

“Christopher Dawson and Mircea Eliade have both observed that the modern Left would be unthinkable without its distinctly Christian, even Judaic, matrix.”  page 32

Gottfried also devotes a chapter to the classic work The Whig Interpretation of History by Herbert Butterfield.  Since I read Butterfield’s book this past year, I found the discussion of it worthwhile.  The essays cover other aspects of intellectual and political history, such as the English constitution, Fascism, Heidegger, Strauss, liberal democracy, and the origins of the state.

This is not bedside reading, but the essays are well worth the effort. 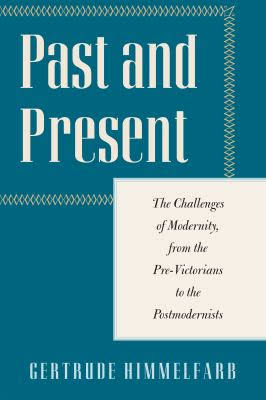 Past and Present: The Challenges of Modernity, from the Pre-Victorians to the Postmodernists by Gertrude Himmelfarb, published by Encounter Classics.

After I read The Roads to Modernity: The British, French, and American Enlightenments by Dr. Himmelfarb several years ago, I became a diehard fan of her work.  I have a half dozen or more of her books and am in quest of every single one.  She is to the field of history what Dr. Louise Cowan was to literature.  By that, I mean that she is brilliant and continues to produce good stuff as the years go by.  Her husband was author and political thinker Irving Kristol, and William Kristol, editor of The Weekly Standard, is her son.

The essays in this book range from ones written decades ago to some that are recent.  Historical figures who are discussed in this book include Leo Strauss, William James, Edmund Burke, Matthew Arnold, Winston Churchill, Thomas Carlyle, Benjamin Disraeli, Albert Einstein, and others.  This book is on my “to read” stack, so I cannot comment further on these essays.  But again, if Dr. Himmelfarb wrote it, I want to read it. If anyone would rather just sit back and relax and enjoy the pure joys of history, try The American Spirit: Who We Are and What We Stand For by David McCullough.  All of McCullough’s books are delightful reading.  Only David McCullough could persuade me to tackle some 500 pages on American artists, scientists, and authors who trekked their way to Paris to study.  That story was found in his book The Greater Journey: Americans in Paris.  I can easily recommend his books on John Adams, his account of the year 1776, or his books on Theodore Roosevelt, the Panama Canal, or the Wright Brothers.

The American Spirit consists of talks that he gave as graduation speeches or before Congress or on other occasions.  McCullough is the master of the uplifting story or forgotten figure whose role in history is largely unknown, but inspiring.  Anyone who could read this book and not enjoy it is a real…fuddy duddy…to use some rather harsh language.

Of course, many other books could be listed.  I hope to highlight some great books on various wars very soon.  But I will mention some interesting works out on the horizon that I don’t have yet:

What is Classical Liberal History?, edited by Michael J. Douma and Phillip M. Magness, sounds like both a challenge and a delight.  It is on the waiting list right now.  And speaking of Michael J. Douma, I will soon be turning the big guns on his book How Dutch Americans Stayed Dutch.  Yep, all this sure beats working for a living.