As expected, 2017 resulted in lots of new books and studies related to Martin Luther, his fellow Reformers, and the Protestant Reformation.  It was the 500th anniversary of that turning point in history, in case you missed it.  The story, always a good one, was told over and over again of how Luther discovered God’s grace, how he labored to put the Bible into the hands of common Christian folk, and how he railed against abuses and scandals within the established religious structure of late Medieval Christendom.    We sang “A Mighty Fortress Is Our God” and marveled at the speech ending with “Hier stehe Ich, Ich kann nicht anders” (“Here I stand, I can do no other.”).  As the year came to an end, we were able to once again credit Luther with the practice of having lighted Christmas trees.

Of course, every historical event is more complicated than the fun telling of the story.  Good guys are rarely purely good guys.  Easy victories were never easy.  Rousing speeches did not always rouse.  The differences between winning causes and losing causes in history is often a matter of perspective and interpretation.  Luther had faults, which is kind of like saying Switzerland has mountains.  Whether it was inconsistencies, outright acts of wickedness, stubbornness, or German-ness, Luther was a man of his times and a sinner in need of grace.

While we Protestants celebrated, we knew that there were large swaths of people who profess to be Christians who were not and would not join in.  Place them where you will, they include a large number of different views and experiences.  In most cases, I would simply say, “You are missing a great party.”  But there is the occasion for asking ourselves why they didn’t join in.

In the wave of new books related to the Reformation that came out in 2017, one short and less impressive fellow is a work titled Long Before Luther by Nathan Busenitz.  Let me explain the phrase “short and less impressive” first.  There are some new and weighty biographies of Luther that I have stacked on my desk in front of me.  These include popular author Eric Metaxas’ work on Luther, another book titled Brand Luther by Andrew Pettegree,  one called Martin Luther: Renegade and Profit by Linda Roper, a collection of essays on Luther called The Legacy of Luther whose contributors include the recently deceased R. C. Sproul, and I don’t have all the new Luther books.

Shorter and more scholarly, academic, and narrowly focused books have also been showing during the past year dealing with Luther and the Reformation.

Shyly stacked among all these books is Long Before Luther, a paperback published by Moody Publishers,   with the list price a mere $13.99.

Yet in many ways, this quiet little collection of quotes and explanations that go for 190 pages (with another 50 pages of notes) is the key to this whole issue of the Protestant Reformation.

Simply put, did Luther (or Calvin, Bucer, Bullinger, Knox, Zwingli or Cranmer or any one else) come up with something new?  If Luther “invented” a religion, he still gets in the history books and can take his place alongside of Mohammed, Joseph Smith, or anyone else who had some series of experiences and ideas that attracted follower.

“But Luther’s views sprang from the Bible!” you might say in response.  Certainly, yes and amen, and that is why we cry “Sola Scriptura.”  But we all know people who huddle up with their Bibles, maybe eschew all churches, despise creeds and confessions, and come up with original stuff from the Bible that just ain’t so.

Suppose I were to stand up to preach in a church and began with these words, “I am going to share something from the Bible that is brand new.  No one has ever discovered this before.” I would hope that the elders would be moving in position quickly to take me out of there, kicking and screaming, if necessary.

Over 2000 years into Christian life, doctrine, and practice, neither you nor I are going to discover something brand new.  We may have some useful, innovative, creative explanations or applications.  We may be able to benefit from theological, archeological, or linguistic discoveries of recent decades (see Michael Heiser’s The Unseen Realm).  We might conclude that key leaders in church history, be they Reformers or Puritans or Westminster men, were in error on a point.  But to imagine that we can be original discoverers is quite scary.

Luther was an Augustinian.  He, in time, left the Roman Catholic Church, but he never left Augustinianism.  He was taught and grounded in the Church Fathers.  Therein lies the importance of this book.

Being saved by grace and begin justified by faith are ways that salvation is described after Luther and on into our time.  But that way of seeing, understanding, exegeting the Bible were not inventions or constructions of the 16th century.  With 25 pages devoted at the end to just quoting the sources, this book anchors Luther in the tradition of the Faith Once Delivered to the Saints.

It should be no surprise that Augustine is the key background figure in this work.  Marco Barone’s book Luther’s Augustinian Theology of the Cross is an in-depth study of the Luther-Augustine connection, but Busenitz’s book is a good overview of Luther’s debt to Augustine.

This is the kind of history that encourages.  God gave us His Word.  The early Church Fathers, fallible though they were, upheld the Word.  At various times in history, key doctrines have been warped, obscured, and denied.  But the Word pops back up, new, powerful, alive.  The crowd of witnesses from the long halls of church history are all there rejoicing that what they knew, we know, and what we know, others will know. 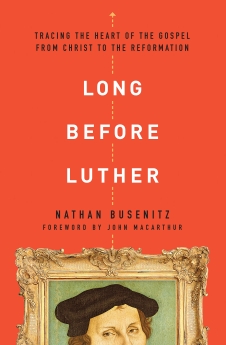