One of the things I learned quickly when I begin reading serious books about the Bible, theology, and Christian living was that the most popular authors and works were not to be trusted.  The Bible commentaries of William Barclay were found everywhere.  Barclay was a great story teller who filled his volumes with anecdotes, but he either waffled on or outright denied basic Christian truths.  What Would Jesus Do? remained a popular book, but it was sappy.  The Late Great Planet Earth and other bestsellers from Hal Lindsey were to be shunned at all costs.  There were other books filled with fluff, saccharine, and, let us say it, heresy, that were floating all around the Christian community.

But I was marching to a different drummer.  I had entered a world where names like Warfield, Boettner, Clark, Rushdoony,  Machen, and others were providing the gold standard for which authors to pursue, which books to read, and which theological topics to focus on.

Many times and in many places, I would see a book titled My Utmost for His Highest.  I did not know the book itself, the author, or the theological perspective it contained.  But it was popular.  I probably confused it with another book titled Hind’s Feet on High Places a few times, but avoided both books.

The theologians I read, the pastors I listened to, the cassette tape lectures I consumed (from Mount Olive Tape Library), and fellow believers of like-theological persuasions all provided me more than enough theological fodder for me to consume.

Then a funny thing happened on the way to spiritual perfection (and I wasn’t even close to arriving).  George Grant came to Texarkana to speak at our school and to the community.  In the Q&A sessions, he got the inevitable question asking how someone could possibly achieve any semblance of reading all they needed to read.  After all, in our circles (Reformed, classical education, Kuyperian, etc.), we love books and a wide range of books on theology, history, literature, and more.

Grant’s answer was that sometimes he was so busy and tired at night that he only had time for a snippet here and there from a book or two, a bit of Bible reading, and the daily selection from My Utmost for His Highest by Chambers.  I was taken aback.  Maybe Dr. Grant meant to say that he read a bit from Calvin’s Institutes, Luther’s Bondage of the Will, or Jonathan Edwards’ sermons.  But no, I had heard correctly.  George Grant reads and rereads Oswald Chambers’ long-time best-selling devotional classic My Utmost for His Highest.

Of course, I then made it my mission to buy a copy of the book.  Over the years, I have picked up several copies of it, along with a few other works by Chambers.  But, I confess this to my shame, I did not become a daily Utmost reader. 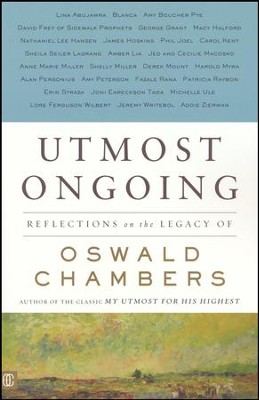 Recently, I learned that a new book was out about Chambers’ book.  This book consists of 27 contributions by people in all walks of life who lives and Christian walk have been impacted by Chambers’ Utmost.  For many, the book was given to them early in their Christian walk.  Some found direction and help early on. But for others, it took time and many experiences for the devotional’s content to come back into their minds and bring change.

Former President George W. Bush is perhaps the best known example of someone who has used the book. (I wish he had contributed a chapter to this work.)  But Chambers’ book, largely put together by his wife Biddy after his death, has directed people in all sorts of work and many types of Christian ministries.

Most of the contributors were unknown to me.  There were two exceptions–Grant himself and Joni Eareckson Tada.  When I first got the book, I turned immediately to Grant’s article and read it.  As expected, he and Joni both had wonderful contributions.  But it was the others who made up 25/27ths of the book and whose articles impressed me as much or more.  I was made aware of so many Christian ministries, web-sites, and servants of Christ that I did not know existed.

In the past few months, we have lost at least three great and powerful Christian leaders:  R. C. Sproul, James Sire, and Billy Graham.  The number of people whose lives have been changed by these three men (any one of them or all three) is incalculable.  My Utmost for His Highest first came out in 1935.  It has been reprinted in a multitude of editions, including an updated “translation” into more modern language.  Each day, thousands of Christians begin their day with this book or work it into a break or some free minutes.  And it only takes a minute or two to read the snippet of a Bible verse and the three to five paragraphs that follow.

For faithful readers of Chambers, this collection of testimonies would be a great joy.  For those of us who fall short, this collection is a convincing exhortation to get the book and keep it close by and actually read from it–daily. 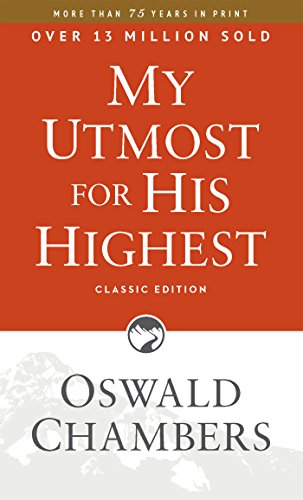 Footnote:  A few years back, I was part of an email discussion group. One contributor once raised what he saw as a concern.  It was that people in Reformed congregations were, in all too many cases, reading Oswald Chambers.  I think I was the only responder who did not share the concern.  At the time, I was pastoring a Reformed congregation.  Too much Chambers would have been welcomed on my behalf.  Yes, I would want to see the Reformed folk reading Kuyper, Warfield, Calvin, Sproul, and a lot of guys with Dutch names.  Yes, Chambers’ books focus on a narrow part of the whole Christian life.  But that central core–the heart–needs a daily dose of, if not Chambers, those who share his love and devotion to Christ.