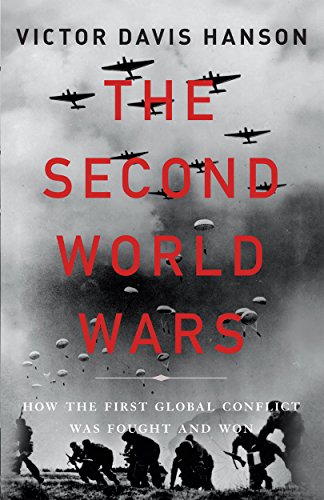 Two factors made this book an instant “Must Have” and “Must Read” work.  The first factor was that Victor Davis Hanson wrote it.  Hanson is both a classicist and a military historian.  He is equally at home teaching, speaking, or writing about the ancient Greeks and Romans.  His skills include being adept at discussing the literature of the Greeks and Romans.  Want to know about Homer, Herodotus, or Livy?  Read Hanson.  Particularly, see Who Killed Homer?, Warfare and Agriculture in Ancient Greece, Bonfire of the Humanities, or A War Like No Other.

But he is also one of the premier military historians of our time.  Rank him right up there with John Keegan.  See Carnage and Culture, Ripples of Battle, The Soul of Battle, or The Savior Generals.  (We can add this point also:  Hanson is a first rate political commentator as well.  See his contributions as found on his web-site or on the National Review web-site.)

The second reason was the title:  The Second World Wars.  As I have stated before, my love of history began with studying World War II and other events in 20th Century history.  That love has never diminished.  (My love for other parts of history has increased, however).  Oddly enough, I never took a college class that covered WWII nor have I taught it much in recent years.  But I continue to read about it.

Who then should read this book?  Those who already have read extensively on the war.  This is a BIG PICTURE ANALYSIS of the war.  It is an accounting of multitudes of numbers, details, weapon capabilities, geographical factors, industrial outputs, and casualties.  As such, I loved it.

Who besides Victor Davis Hanson could fill a book with a million statistics, facts, and figures, and then make ample use of references to ancient wars, and still produce an incredibly mind-numbing and brilliant work?  I found myself constantly asking, “How could a war of this magnitude have actually taken place?” and “How could Hanson have assembled and made sense of all these details?”

Most nights (for I read this book at night), I was only able to absorb and cover 10 to 20 pages of this book.  That is a testimony in its favor. (I always had the “page-turner” close by to read after the Hanson book.)  But each night, I looked forward to reading this book.

The Axis powers simply took on more than it was possible for them to achieve.  Of course, one can examine ways they could have won the war or achieved some degree of survival.  Some of the decisions of Hitler, Mussolini, and the Japanese defy reason.

On the part of Hitler: Why attack Russia when Britain was still a formidable force that was hurling bombs on Berlin itself?  Why declare war on the United States after Japan attacked Pearl Harbor?  Why waste so much manpower holding places like Norway?  Why leave Malta and Gibraltar in Allied hands?  Why waste money and resources on some major weapons that were never produced in ample numbers?  And, of course, why brutalize people you needed on your side?

To Mussolini:  Why declare war on France?  That little venture, along with the attack on Greece, helped doom Italy.  Why enter into a war when Italy did not have an adequate army or industry to wage war?  Why join in with the efforts to conquer Russia?

To Japan:  Why leave the American forces in Pearl Harbor wounded, but not destroyed?  Why provoke America and Britain into a war when war with China was already consuming so much manpower?

Along with those issues, the Allied powers made plenty of mistakes on their own.  The fall of France in 1940 continues to defy imagination.  Britain made enough blunders to lose the war a dozen times over.  The United States would have committed blunders of almost irreparable harm had it not been for the British restraints.  Russia’s conduct–meaning Stalin’s–was horrendous and stupid at times.

Yet Britain, America, and Russia produced weapons, planes, tanks, artillery guns, trucks, and bombs in such numbers that the sheer weight of it all should have crushed the Axis powers.  Add to that, the manpower (which was not made up solely of males).

Hanson’s account calls on the reader to reconsider the impact of the Allied bombing campaign over Germany and Japan. The types and amount of planes that Britain and America produced and employed was staggering.  The air war was the second front that Stalin often complained about the lack of.  The British really made a substantial contribution to winning the war both through being at war with Germany longer than any other allied country and in terms of quality production of weaponry.  And no one can successfully dismiss Churchill’s roles and rhetoric.

If your love of history spurs you to want to make the comparisons between opposing forces, this is the book for you.  If you have read and enjoyed Rick Atkinson’s Liberation Trilogy, but feel like you are ready for some behind the scenes details, this book will amaze you.  If you enjoy comparisons of the recent past (World War II) to the distant past (the Peloponnesian War), you will find those comparisons here.

In short, this book is a great contribution by one of our finest historians.  And this book is absolutely vital to add to your library and reading list for understanding the Second World War.

2 thoughts on “The Second World Wars by Victor Davis Hanson”