New book from the University of Oklahoma Press.

Ned Christie was a ruthless outlaw who left a trail of death and violence all over the eastern portions of the Indian Territory in the 1880’s-90’s.  The violence of the area has been portrayed in the book True Grit as well as in both movie versions of the book.  But whereas that story is fiction, the sordid career of the outlaw Ned Christie is confirmed in history books.  Folks breathed easier when Christie’s corpse was displayed alongside the marshals and deputies who brought him in to Fort Smith–dead.

The story of Christie’s gang and brigandage is recounted in various histories of outlaws, the violence of the regions west of Fort Smith, Arkansas, and tales of criminals who were regarded by some as Robin Hood-type figures.  The historical accounts are then backed up by the newspaper sources from the times that excited readers as they told of Christie’s exploits, escapes, and final demise.

There is only one problem with the legend of Ned Christie, Cherokee warrior:  It is wrong.

Author, historian, and scholar Devon A. Mihesuah has labored to set the record straight in her account of this Cherokee leader titled Ned Christie: The Creation of an Outlaw and Cherokee Hero.  Her book proves one vital truth in the realms of Clio’s Muse (meaning history).  That truth is this:  History may or may not repeat itself, but historians repeat each other.  (This saying is attributed to Max Beerbohm, Oscar Wilde, and a number of others–see here.I first heard it from Dr. Gary North.)

On the one hand, the Ned Christie story might be relegated to the obscure and unimportant files of historical studies.  It attracts attention for those of us who enjoy Arkansas history.  The whole saga of “Law West of Fort Smith,” which is the title of a history of the area as well as the backdrop to True Grit, attracts attention due to lawmen, bounty hunters, and Judge Isaac Parker.  That region is a real wild west story, filled with outlaws, heroes, good lawmen, bad lawmen, gun fights, and hangings. (Who can forget Judge Parker’s saying, “I never hanged a man.  The law did.”)

Or the story might be noticed as part of the long, sad plight of the Cherokee people.  After being forced from their homelands in Georgia and the Carolinas, they suffered untold miseries on the Trail of Tears.  Their relocation in Indian Territory was no happy ending.  Struggles and difficulties and divisions remained.  Some Cherokees joined the Union forces in the War Between the States, while others allied themselves with the Confederacy.  Cherokee leader Stand Watie holds the distinction of being the only Native American to be a general in the Confederate Army and for being the last Confederate general to surrender. 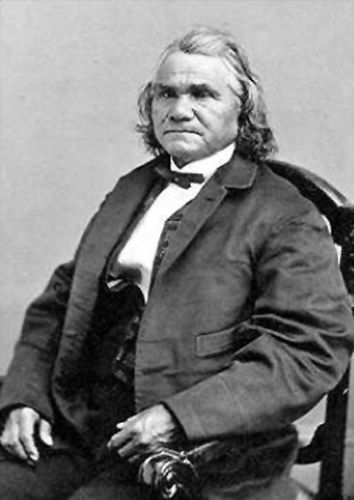 Whatever angle one looks at, the history of the Cherokees, like that of many other tribes, is a tragedy.  There is no need to bring out faults on the part of the Indians in North America.  Two cultures clashed and the stronger culture won.  Both were made up sinners, and usually the stronger force has sins or sin opportunities that are greater than the weaker side.

Ned Christie was not a perfect man nor was he the Robin Hood figure some tried to make him.  He was also far from being a savage or uncivilized man.  He was a member of the Cherokee council and an adviser to the tribal chief.  He was also educated, lived in a house, and was a working man who supported his family.  The Cherokee were divided over different issues, including whether to support Oklahoma statehood (Christie didn’t) and over the degree to which the white culture should be embraced.

When Deputy U. S. Marshal Dan Maples was fatally shot, Christie, along with other Cherokees were in the general vicinity. With little or no clear evidence as to who did the shooting, blame came to rest on Christie.  In a more perfect world, he could have surrendered himself, gone to Fort Smith, gotten a good defense lawyer, produced witnesses, and walked.  But the possibility of getting a fair trial, of being able to get his witnesses to Fort Smith, and to survive jail in Fort Smith prior to the trial were slim to none.  So, for five years, he evaded the law.

During those five years, newspapers had a heyday reporting on the exploits of Christie and his cohorts.  “Fake news” is a term thrown around a lot today, but in the day of Ned Christie, it happened repeatedly.  After all, violence and mayhem create more interest than more mundane events in life.

It all ended, in a sense, when lawmen surrounded Christie’s home, dynamited the place, and gunned the Cherokee man down.  It actually really didn’t end there.  Christie’s corpse was displayed at Fort Smith for all to see.  His teenage cousin was sentenced to prison and later died in an asylum for “insane” Indians.  And Christie’s name and family were left to suffer.

History is about truth seeking.  Professor Mihesuah has done a fine job of clarifying the record on a sad story from history. As Herman Melville’s narrator says at the end of “Bartleby,”  “Ah humanity.  Ah Bartleby.”  To which we add, “Ah Ned Christie.”