I really want to become guilty of something I have been accused of in the past.  Sometimes when discussions would arise and morph into arguments, someone would say, “You have been reading too much Calvin.” The charge has been made using other terms as well.  “You are reading and getting your ideas from the words of men.”  “You have become programmed like a logic book.”  Perhaps the most accurate criticism was simply, “You are crazy.”

I did not embrace Reformed theology, sometimes called Calvinism, by just hearing men.  Logical programming has never been my abiding characteristic.  Going insane has always only a short trip.  “You are following the words of men” is an odd criticism because whoever is saying that to me is giving me words of a man (using “man” in the now archaic sense of “person”).

Agree or disagree, my understanding of Reformed theology came from the old fashioned method of looking up lots and lots of Bible passages.  Yes, it was from books written by men that I was getting the listings of Bible verses.  Loraine Boettner caused me lots of angst, joy, irritation, joy, unbelief, joy, belief, and then more joy.  Then along came the book The Five Points of Calvinism:  Defined, Documented, and Defended by David Steele and Curtis Thomas.  With a minimum amount of defining and defending, the bulk of the book was Bible verses supporting each contention.

Before Reformed theology, I never really understood how to read, study, and work through the Bible.  Reformed theology made me a student of the Bible.  For a time, I thought all Calvinists agreed on everything.  (Pause for a minute or two of laughter.)  In time, I realized that all true Calvinists or Reformed folk really just centered on one narrow, limited, restricted doctrine–the Bible is the Word of God.  The Bible Alone–Sola Scriptura–was the hallmark.  Yes, we (the Reformed) fall short of our principle; yes, we interpret;  yes, we put spiritual blinders on;  yes, we sometimes inadvertently use old creeds, confessions, and “words of men” to bolster some weak arguments.  But the touchstone still stands:  Scripture Alone.

Now, back to John Calvin.  First of all, Calvin was the last person who would have wanted a whole movement to be named after him.  Second, he didn’t devise the handy-dandy TULIP or 5 Point Summary of Salvation.  Third, he was not a Johnny Calvin-One Note who found predestination and election in every verse.

He wrote a simple Bible study guide for young believers.  Keep in mind, he was given the gift of teaching and writing, and he was compelled by circumstances to teach, speak, preach, or write to fellow believers about doctrines of the Bible.  Throughout his ministry, much of his work was focused on verse by verse teaching of the Bible.  From those lectures, sermons, and writings, we have a huge corpus called Calvin’s Commentaries along with collections of sermons that are still be translated into English. 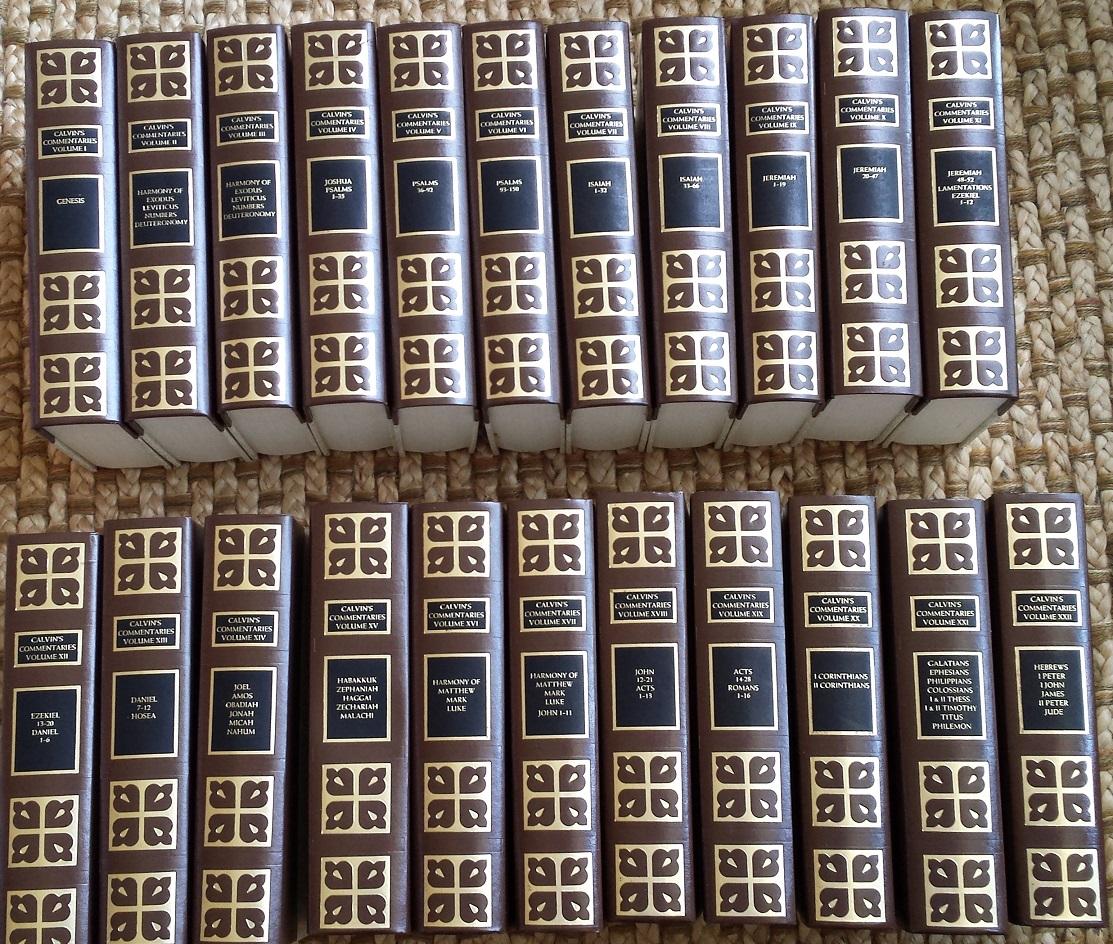 But his initial theological work was the study guide for major Christian beliefs, commonly known as Calvin’s Institutes of the Christian Religion.  This book started out as a short treatise of a few hundred pages, but throughout his life, Calvin continued to revise this book.  In the English editions, Calvin’s Institutes appears as a thick one volume or two still hefty volumes of some 1000 pages.  The two best known translations is the older Henry Beveridge translation and the 20th century Ford Lewis Battles translation.  (I like both and have used the Beveridge for teaching because it was more affordable.)

My favorite translation is the Banner of Truth edition.  Called “Calvin’s Own ‘Essentials’ Edition, this beautiful volume was translated by Robert White and was made from the French edition in 1541.  This book is 842 pages and is hard bound with the quality that Banner of Truth fans know quite well.

Although Calvin’s Institutes, taken as a whole, is a massive work, it can be read as a series of shorter books.  Overall, it follows the outline of the Apostles’ Creed.  The book is surprisingly readable and understandable.  Calvin was writing to his congregations and readers; he was not writing for a theological text for theological academics (not that they cannot read it profitably as well).

Over the years, quite a number of guide, helps, outlines, and commentaries have been written for use alongside of Calvin’s book.  I have picked up at least four or five of these types of books through the years.  Having a guide, a mentor, a teacher is always helpful.  The Ethiopian eunuch asked the question that all real students ask repeatedly:  How can I understand what I am reading unless someone guides me?”

Knowing God and Ourselves: Reading Calvin’s Institutes Devotionally by David B. Calhoun is a recent publication by Banner of Truth.  How can I say this without exaggerating?  Here goes:  This is a great book.  It ministers to mind and soul.  It guides the reader through the main headings of Calvin’s Institutes while giving delightful quotes from other Calvin scholars and writers, supplying Bible verses, and heart-directed comments.

While designed as a book to accompany the reading of the Institutes, it can be read as a stand alone volume.  Whether the readers is looking for history, biography, theology, Bible teachings, and key topics regarding Calvin’s theology, it is here.

Notice the key words in the subtitle:  Reading Calvin’s Institutes Devotionally.  Calvin’s mission statement on life was having a heart centered, empowered, propelled, and driven by a love for God.  His key objection to the many theological enemies of his time was that they were not Christ-centered.  Church work was all about making people believe, trust, love, and obey Jesus more and more.

Quite frankly, Calvin often reads more like a pietistic mystic than like a Calvinist.  He is like the praise and worship part of modern worship services, except that instead of loud amplified music and repeated (too many times) choruses, there is strong theological, Biblical truth.  His writings are Christ-centered and Christ-consumed.  And along with, before, or after reading Calvin, read Knowing God and Ourselves.

Additional recommendation:  I first became aware of David Calhoun’s writings when I read the first of his two volume story of Princeton Seminary.  I love that set, which is a Banner of Truth publication.  Then later, I read, reviewed, and loved his shorter volume on Columbia Seminary and his biographical and editorial work highlighting the southern Presbyterian theologian William Childs Robinson.

Knowing God and Ourselves is a different kind of book, however.  It is a first rate study and great for directing the heart and mind to God.  God’s blessings on Dr. Calhoun whose health is not good, but whose faith is strong.

2 thoughts on “Knowing God, Ourselves, and also John Calvin”