Theater of a Separate War: The Civil War West of the Mississippi River, 1861-1865 by Thomas W. Cutrer is published by the University of North Carolina Press.  It was awarded the Douglas Southall Freeman Award, Military Order of the Stars and Bars.  Dr. Curtrer is professor emeritus of history at Arizona State University.  He has previously authored a number of books, including Ben McCullough and the Frontier Miliary Tradition, Parnasus on the Mississippi: The Southern Review and the Baton Rouge Literary Community 1935-1942 (which is a book I thoroughly loved when I read it years ago), and most recently, Doris Miller, Pearl Harbor, and the Birth of the Civil Rights Movement.

Two preliminary thoughts about Theater of a Separate War (TSW):

First, I hope Dr. Cutrer doesn’t count off much for late assignments.  I began reading this book back in January, but it got brushed aside by a torrent of school readings, other review books, and other matters.  I picked it back up a few weeks ago and read to the end.

Second, I found myself feeling ashamed while reading this book.  After years of reading and teaching history, I have no idea how a mere mortal undertakes to write an account like this.

Now, on to the vast expanse of land west of the Mississippi, commonly called the Trans-Mississippi Theater.

Each time I teach on “the War,” also known as the War Between the States, the Civil War, the War of the Rebellion, the War for Southern Independence, or what southerners often just called “the Wawh,” I try to explain the three theaters–or major areas of operation–in the war.  The map above is perfect, and it will show up in future classes.  For many students–at all levels–the War took place in those places in Virginia and a few points north where such men as Robert E. Lee, “Stonewall” Jackson, J. E. B. Stuart, and James Longstreet duked it out with wave upon wave of Northern invaders who finally wore down the beleagured Confederacy.

Besides being the subject of most of the books, studies, national park battlefields, and colorful leaders, the eastern theater was the location of both capitals.  Many defining books, such as Brace Catton’s many works, Kenneth Stamp’s Lincoln Finds a General, and the historical/fictional trilogy by Michael and Jeff Shaara, are focused on events in the east.

For me, personally, it was around 1991, on my honeymoon vacation no less, when I was able to visit battlefields at Shiloh, Stones’ River, Chickamagua, and other western battlegrounds that I began seeing beyond just the battle of Vicksburg (which we toured around 1994).  It was Andrew Nelson Lytle’s fun biography Bedford Forrest and His Critter Company that made me a student of that phase of the war.

Only when I began teaching Arkansas history and also participated in a re-enactment group for a short time did I begin giving any attention to the Trans-Mississippi.  In the 1960’s, a small press in Little Rock, called Pioneer Press, published a number of books about the war in Arkansas with some dealing with adjacent areas.  Those books are largely out-of-print and high priced in the used book world.  (Lots of them were given to public school libraries throughout the state.)  I think I paid about $60 for a copy of Rebels Valiant: Second Arkansas Mounted Rifles (Dismounted) by Wesley Thurman Leeper.  I have a couple of ancestors who were in that unit, hence my willingness to pay such a hefty price back some 20 plus years ago. 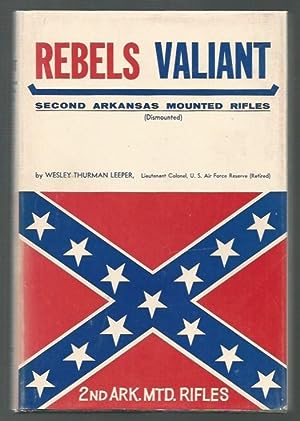 Over the years, I have managed to acquire (to no one’s surprise) quite a few books about the War in Arkansas, a few more about Texas, Louisiana, and Missouri, and a biography of the Cherokee Indian and Confederate General Stand Watie.  I am still, however, struggling through first or second grade in terms of having a good grasp of the Trans-Mississippi part of the War.

This new book, Theater of a Separate War, is and will be continue to be the defining work on this part of the war.  This part of the war was a separate (in some senses) war from what was happening in the nearby western theater and from the eastern theater.  In some ways, the Trans-Mississippi was a series of separate wars.  There were battles for control of the western territories of New Mexico and Colorado.  Control of the coast of Texas was another phase of the war.  The civil wars within the Civil War as found in Missouri and which spilled over into Kansas and northern Arkansas was another series of events.  Louisiana, the richest state in the Confederacy, had battles ranging from New Orleans in the south to the outskirts of Shreveport in the north, and being on the west side of Vicksburg, it played a small, but indecisive role in that pivotal battle.  If all that isn’t enough, the various tribes of Native Americans, located mainly in the Indian Territory or present day Oklahoma, fought largely for the south, with some exceptions.

As Dr. Cutrer points out in the conclusion, if there had been no war in the rest of the United States, the events in this wide theater would still be a fascinating and important study in military history.  “What difference does it make now?” to use the question posed by some politician of the past.  The war was neither won nor lost in the Trans-Mississippi.  It was, to quote Albert Castel as Cutrer did, “the garbage dump of the Confederate army.” It was, often enough, a distraction and side show to the Union generals and leadership.

In the fun category of “What If” history, or Alternative History, made famous by the scholarly works of such men as Robert Cowley or fictional works by such men as Harry Turtledove (Guns of the South) or McKinley Cantor (If the South Had Won the Civil War), one can speculate a Southern strategy that would have captured Missouri (particularly St. Louis) for the South and carried the war to the North with an invasion sweeping across Illinois.

A more likely scenario, at least it seemed more likely at the time, would have been for the Confederacy to have sealed an alliance with France through the Trans-Mississippi connection.  Remember that at this time, France had bypassed the Monroe Doctrine to set up a puppet government in Mexico under the ill-fated Maximillian.  (I thought “ill-fated” seemed a bit cliched, but just had to be in that sentence.  Getting shot by a firing squad doesn’t conjure up words like “lucky.”)

Another aspect of this war that contributes to its lack of notice is the casualty figures.  I must admit that after years of teaching the war, I find myself more and more queasy and disturbed by the numbers of men killed and maimed in battle after battle in Tennessee, Virginia, Mississippi, and Georgia.  The novel The Widow of the South by Robert Hicks reminded me of what I had read about and watched in movies too many times:  Even those soldiers who survived the wounds of war endured some horrible hospital experiences.

In contrast to the thousands and tens of thousands killed, maimed, or captured, many of the battles in the Trans-Mississippi resulted in anywhere from a few hundred to “only” a few thousand casualties.  The numbers of what constituted battles in the Trans-Mississippi pales in comparison to the huge numbers in other parts of the war.  But part of the greater purpose of this book is to get our attention off the glory/horrors images of the other campaigns and to focus on this part of the war.

Now for two criticisms of the book:

There is, somewhere, a listing of the 100 most important books on the Civil War.  I am sure that it is out-of-date.  I am equally sure that I have made up my own versions of such a list.  But in any reckoning on this war, this book will have to be in the line-up.  This work doesn’t have the fire and passion found in Bruce Catton’s books or Shelby Foote’s works.  It is scholarly military history with a penchant for giving lots of details.  But it is a worthy study and a powerful unveiling of a whole angle on the most neglected part of the Civil War.

The author and his book.