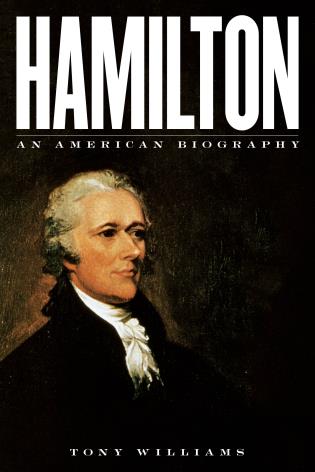 Hamilton: An American Biography by Tony Williams is published by Rowman and Littlefield.

Often the renewed and on-going interest in our Founding Fathers is credited to the books by David McCullough and Joseph Ellis. Certainly, McCullough’s John Adams took an overlooked Founder and President and gave him much credit that was long due him.  Likewise, Ellis’ books, such as Founding Brothers, His Excellency George Washington, American Quartet, and others have created a cottage industry for Ellis and have enlightened many Americans about their heritage.

These works, and I would add others such as the books by Thomas Fleming and David Hackett Fischer, have filled in huge gaps of knowledge and have created waves of appreciation (and maybe patriotism as well) for readers.  The Founding Fathers (I use that term for convenience and not for offense) often give us great solace as we contemplate current leadership.  Thus, John Adams stood as a foil to the slimy actions of Pres. Bill Clinton. Others would have found the Adams father and son presidencies vastly preferable to the Bush father and son presidencies.  For people on different sides of political perspectives, Presidents Obama and Trump could or can only be endured by remembering their superior predecessors.  Even a beloved President like Ronald Reagan seemed far inferior in intellect and vision than the first three or four occupants of the office.

For me, the interest in reading on those early national leaders did not begin with McCullough and Ellis or any of the other biographers.  In 1976, the year of our Bicentennial celebration, I read James Thomas Flexner’s four volume biography of George Washington.  I also read other books along the way that enlightened my understanding and tilted my views on the American origins.  Quite often, I was reading books by authors who were more theologically centered writers than historians.  Thomas Jefferson, being a Deist and having other democratizing notions, did not fair well in their books, nor in my mind. Later, as I read more southern-oriented writers, I found Jefferson more acceptable

As a teacher, I have always enjoyed making the contrast between Washington’s two premier cabinet members–Thomas Jefferson and Alexander Hamilton.  On the one hand, I continue to be amazed at Washington’s brilliant original cabinet.  Jefferson and Hamilton were perhaps the most brilliant two cabinet members to ever occupy positions at the same time.  It is refreshing to think that Washington was able to hear or read both of these men expressing views on the issues of the day.  Always the excellent, but often quiet, leader above the fray, he would weigh the arguments before making a decision.

This method of ruling not only sounds great, but it is.  Unfortunately, much of history is beautiful at a distance, but up close reveals some rather ugly brush marks.  That is never more the case than in the Washington cabinet.  Jefferson and Hamilton were not airy political philosophers, smoking pipes, and expressing different options.  They were real men, with real and often vicious passions, who played political hardball.

Chuck Colson, later a great Christian leader, was reputed to have said that he would have run over his grandmother for Richard Nixon.  Politics in the early years of our republic was not that tame and civil.  Meaning in short, don’t mess with Thomas Jefferson.  He and others in his camp could have bested many today who today get noticed for dirty politics, fake news, collusion, etc.

All of this leads us back to this new biography of Alexander Hamilton.  Thankfully, Ron Cherow’s massive biography (which I am embarrassed to admit that I have not read) and Hamilton–the Musical (which I have not and likely will not see) have drawn attention to the man who otherwise is restricted to our ten dollar bills and connections to the fateful duel.

At the same time that he is getting some favorable press and attention from the public, I have repeatedly bumped into conservative people who blame Hamilton for ever evil in our country from the founding years to the present.  Big government–blame Hamilton.  Failed liberal (Wilsonian, New Deal, Great Society, Obama-era) policies–blame Hamilton.  Debts, paper money, the Federal Reserve–blame Hamilton.  Trampling on the Constitution–blame Hamilton.  Funny though that many who blame him don’t take the next logical step.  That is, why not blame the greatest and most influential Hamiltonian of all time?  Meaning, George Washington.

Hamilton was flawed, quirky, inconsistent, stubborn, occasionally reckless, at least once terribly immoral, and often mistaken.  Translate that into this: Hamilton was a human.  As Hamlet said of his father,

“He was a man, take him for all in all,
I shall not look upon his like again.”

It is hard to fathom a person who was able to climb out of difficult circumstances to reach such heights as Hamilton did.  Illegitimate (which his detractors continually reminded everyone of), orphaned early in life, he was a self-educated, highly successful warehouse operator while still in his teens.  Bless the ones who saw his talent and sent him to the colonies.  Incredibly brave on the battlefield, he was also a great administrator and organizer on the staff while in the Revolutionary War.  Not as diversely gifted as Jefferson, he was, nevertheless, a first class intellect.  His brain power and unrelenting drive enabled him to whip out defenses, commentaries, and explanations of political issues in short order.  He handily contributed the larger portion of the essays that comprise The Federalist Papers, which is still regarded as a major contribution to Constitutional interpretation and to politicla philosophy.  When needed, he wrote in-depth accounts on financing the government and securing America’s place among the nations.  Later, he largely crafted George Washington’s “Farewell Address” without calling attention to himself.

If Washington was “first in war” as Lighthorse Harry Lee said of him, then Hamilton was first in finance.  Unlike secretaries of the treasury who today are largely picked from successful business corporations, Hamilton learned economics and politics on the run.  He had to fight against a coalition that included such heavyweights as Jefferson and Hamilton’s former ally James Madison.  For a long time thereafter, critics looked into Hamilton’s governmental record in search of a skeleton in the closet.  President Jefferson even directed Treasury Secretary Gallatin to examine Hamilton’s records, but Gallatin found a spotless slate.

Much more could be said about Hamilton here, but Williams’ book Hamilton says it all and says it in 166 pages of text.  The only flaw in this book is the endling because Hamilton died too soon and too uselessly in a duel.  On his deathbed he reaffirmed his faith in Christ and denounced dueling.  If only he had avoided that honor-warped practice before facing off with Aaron Burr.

Great book.  Great man.  Good to read and remember and rekindle our hopes for men like Alexander Hamilton in our day.