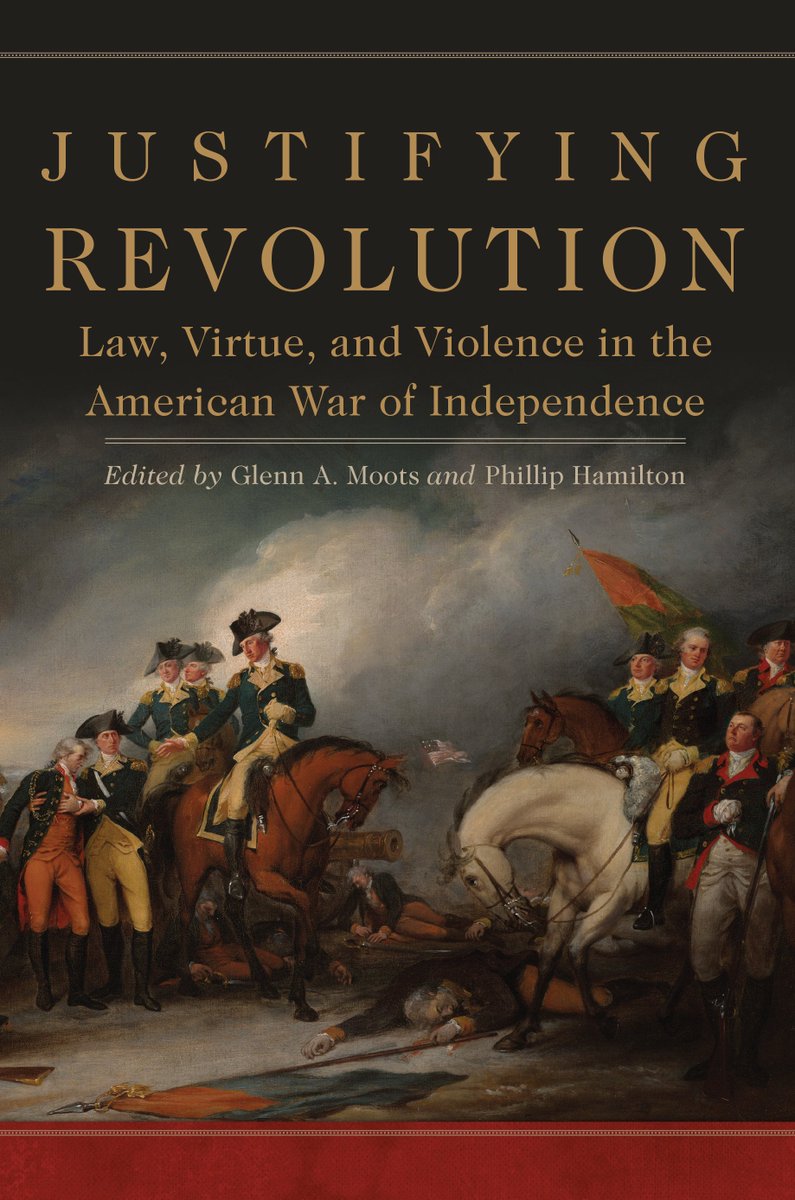 Justifying Revolution: Law, Wirtue, and Violence in the American War for Independence is published by Oklahoma University Press.  It is edited by Glenn A. Moots and Phillip Hamilton.  Contributing scholars provide 13 essays that examine the war in light of the just war theory, which has not been the focus of any previous study exclusively.   “Chapters are organized into three parts, each exploring a traditional subfield of just war theory: jus ad bellum (right or justice in going to war, including the legality of taking up arms), jus in bello (right or justice in conducting war, including legal codes governing military conduct, and jus post bellum (right or justice in concluding war).

The beginning section examines some of the political philosophers and theologians who influenced those who took up arms.  Two chapters discuss Emer de Vattel, a man who I know only by name who was read by people on both sides.   Dr. Moots and another writer discuss Protestant precedents for resistance and rebellion.

The middle section deals with moral issues that arose during the course of the war.  These include martial law, war against civilians, and treatment of prisoners of war.  As noted in the introduction, “Beyond the conflict’s battlefields, the war unleashed devastating diseases upon soldiers and civilians, while rapine at the hands of enemy forces destroyed many homes and enormous quantities of property.  Mob violence, military occupation, and conflicting allegiances forever displaced tens of thousands of people.” (page 4)

The final section includes an essay on John Jay, a statesman with Christian beliefs and convictions, and his views on the revolution and its aftermath. A second chapter in this section examines how and why the British opted to make peace with a vision toward building a more economic, rather than miltary, empire.  The final essay then explores how Native Americans were viewed.  Not surprising, the attitudes toward “non-civilized” people favored excluding them from the principles of just war.

At this point, I am just previewing the book.  I have read the introduction which lays out the themes of the work and gives synopses of the following chapters.  The book grew out of several panel discussions and scholarly exchanges.  Besides an interest in every aspect of American history, I was drawn to the book for several reasons.  A few years back, I read Glenn Moots’ Politics Reformed: The Anglo-American Legacy of Covenant Theology. That book may be the most important book I have read on political thinking from a Christian and Reformed perspective.

The second draw to the book is the issue of the American War for Independence itself.  By necessity, history is taught by simplification.  By tradition, we teach the American War for Independence as a good, necessary, and progressive matter.  The editors say, “Indeed, the two fundamental ideals associated with the Revolution, liberty and equality, have marched them from victory to victory to become the zeitgeist of our age.”

Because the casualty numbers of our War for Independence seem small compared to later wars, because our Founding Fathers were of such an incredible character, and because we have been more than reconciled to our foes in that war, we often think that it was clean, neat, and handled properly according the rules of civility and warfare.  In short, we were right and the British were wrong.  I do favor the Patriots in that war over the British and the Loyalists.  I cannot escape and don’t want to escape being an American.  But history is a complicated matter.  The simple math of history that is taught in junior high, high school, and maybe even lower levels of college is blown away by the calculus and trigonometry of math that is encounted with more serious study.

All of that is to say that this book is quite important for us and our time.  As a history teacher, it will not change the direction that I teach with, but it will modify my approach and bring in some caution.  History teaching has consequences.