September begins with the promises of adding riches untold,
and the pocketbook may not change in the slightest.
Jose de la Casa
The grass is too high, getting tough, growing slowly, and a bit brown from the heat and lack of rain.  School has started.  Nights a bit longer now, and there is a promise of cooler weather not so long from now.  Personally, I wish time were moved six to eight weeks back and I were stuck, isolated, abandoned with only my family and lots of books at some beach house overlooking the incoming waves or some cabin in the mountains with a valley to see from the back porch.  But that didn’t happen in June or July or August, so I accept the inevitable–September.  But as De la Casa noted in the quote above, there can be riches found in the month of September.

Of the making of study Bible in our times, there is no end.  That is not given as a complaint, but as a thanksgiving. I have often read the concern about study Bibles which says that people will be prone to read the notes in the Bible and accept them as being on a par with Scripture.  My problem is not anywhere near that.  I am prone not to read the notes at all.  In fact, my preferred daily reading Bible has no notes or added materials, except maybe a paragraph introduction before each book.
But there is a place and use for a study Bible that contains lots of cross references, explanatory notes, extensive introductions, and other helps.  (All of the extras can be used for reading during bad sermons.  Just joking.)
The Worldview Study Bible is published by B & H Publishing, an outstanding source for Christian books and Bibles.  For high school or college students, this would be a great resource.  The translation is the CSB, which is produced by B & H (or Holman as the Bible arm of that company is called).  Others more qualified can weigh the merits or problems with the CSB translation.  I can lament that we have the NKJV, ESV, NIV, and now the CSB, along with many others, that are making a common Bible among Christian folk nearly impossible.  I can give a somewhat approving nod to those who prefer the King James Version (while separating myself from those who contend that the devil is the source of all other translations).  Hey, we live in a time of many sound, conservative, evangelical Bible translations.  That is not exactly the stuff of Foxe’s Book of Martyrs caliber problems.
The key feature of this book is the inclusion of large number of essays dealing with Christian worldview issues.  I know there is some debate back and forth over the concept or limitations of teaching about having a Christian worldview.  I know that sometimes we have used the term as a way of importing a somewhat Americanized and politically conservative way of thinking into our Bible studies.  I know that the term Christian worldview can be trivialized and separated from other aspects of the full orbed Christian life. But I still like the term.  I still buy, read, and borrow from books promoting a Christian worldview for interpreting every area of life and thought.  I am a Kuyperian, a devoted fan of David Naugle’s book Worldview: The History of a Concept, and a promoter of Christian education that teaches worldview thinking.
The topics in this study Bible range from theological issues like inspiration and inerrancy to social issues like recreation, careers, LGBT concerns, and more.  Science issues relating to creation/evolution debates and gender debates are included.  Essays on philosophy, politics, economics, music, and other such ideas are also here.  The essays are authored by some leading Christian teachers, pastors, and writers, and they are placed throughout the Bible in places that tie in with the themes of each book.
I have just begun to harvest the fruit of this fine study Bible.  Those looking to understand what is meant by having a Christian worldview or those who are teaching others would enjoy this work.
(I will confine my comments on the other books in the picture to a sentence or two.  More detailed reviews will come later.)

Every Moment Holy is published by that delightful and creative group known as The Rabbit Room.
This is a beautiful book both in outward appearance and in content.  Buy it for someone for Christmas, but get at least 2 copies because you will want to keep one.  It consists of prayers for every moment, time, and circumstance. My morning history study is Justifying Revolution: Law, Virtue, and Violence in the American War for Independence. Edited by Glenn A. Moots (author of Politics Reformed) and Philip Hamilton.  While this is a slow and studious read, it is a great look behind the battles and leaders of the American War for Independence that considers the books, ideas, philosophies, and ethical concerns relating to that war.

Martin Luther’s Commentary on Saint Paul’s Epistle to the Galatians (1535) is published by another new publishing group, 1517 Publishing.
Translated by Harloldo Camacho and with a foreword by Michael Horton, this big book is even bigger than it is. (Yes, I know that is awkward phrasing.)  At 557 pages, this book is the Protestant Reformation, the 5 Solas, the confession of what we believe.  A historical document–yes–but also a great study into a pivotal teaching of the Bible.  Praise God for this new translation. 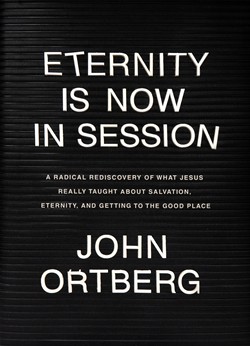 Two days now into reading Eternity is Now in Session by John Ortberg, published by Tyndale Press.
We are not just waiting to get to heaven so all will be experiencing eternal life.  It is here and now and eternal matters are not just some heavenly idealistic realm but are for here and now.  Powerful and instructive.

After a few unexplained delays, I am now reading Atheism on Trial by Dr. Louis Markos.  If he writes it, I want to read it.  He is both a gifted writer and an engaging (irrepressible) speaker.  This book is no fluff work on current atheist evangelists, but is a serious look at atheism and its related philosophical and scientific ideas as found in the ancients, in philosophers of past centuries, and in the current discussions.  Published by Harvest House Publishers. I am always glad to see another edition or promotion or quote from Abraham Kuyper’s lectures at Princeton in 1898 that have sometimes been called the Stone Lectures or more commonly Lectures on Calvinism.  Going back to the topic of Christian worldview thinking–this book is the foundation of all the modern applications.  Brilliant.
Thanks to American Vision for publishing this new edition of a Christian classic.  An added feature or benefit is that this edition contains some slight alterations in punctuation so as to make the text flow.  Kuyper is not an easy read, and so having a few modernizations to style issues is a help. In my opinion, Lectures on Calvinism is one of the most important books ever.