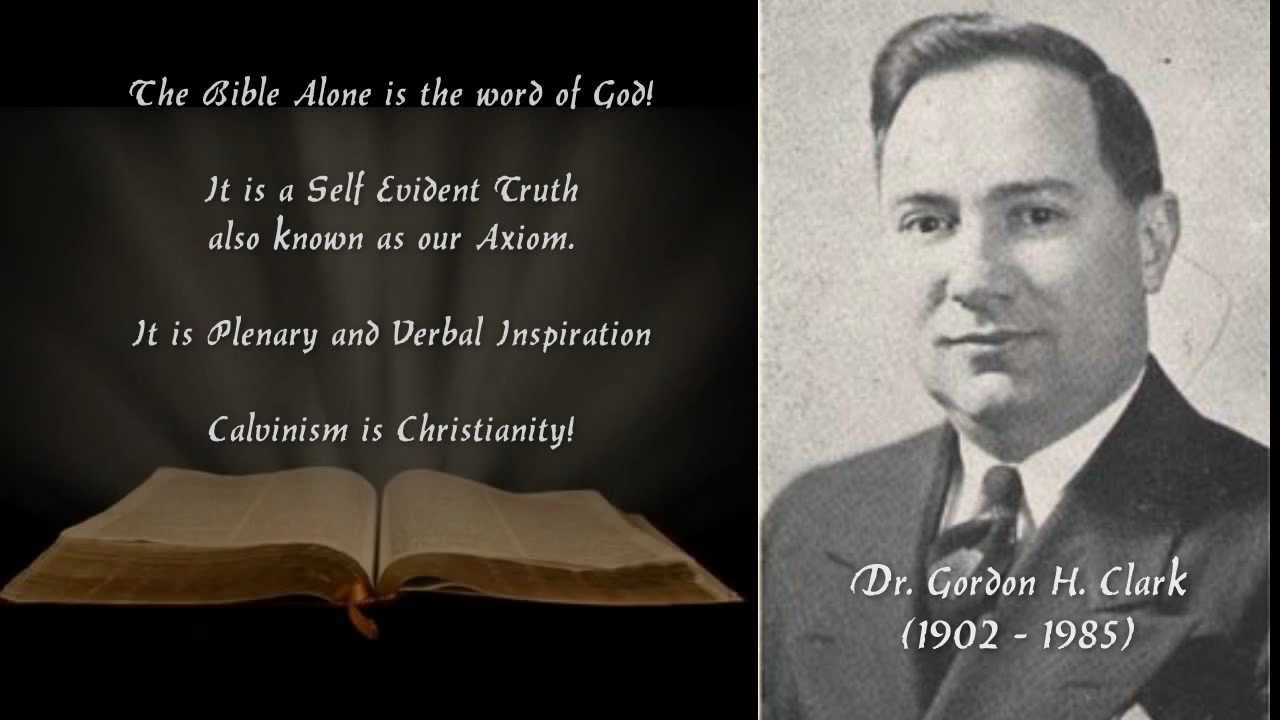 Gordon Clark was a man at peace with waging war for lost causes.  It was not due to a myopic understanding of reality.  Nor was it a penchant for picking the losing side of cultural tides.  And it was certainly not from a desire to simply get beaten up.  Clark was heavily grounded in a truth that was not in vogue, not avant garde, not popular, and not accepted in his time.  Fundamentally, Clark believed that “God has spoken.  More completely, God has spoken in the Bible.  More precisely, what the Bible says, God has spoken.”  Professionally, he was a philosophy teacher.  Because of his particular philosophical premises and approaches, he was also a theologian.  People in both groups chafed against his views, but for Clark, theology was, as is often said, “the queen of the sciences and philosophy was her handmaid.”

His brand of theology was that formulated by Protestants, particularly those who followed in Calvin’s stead, and more particularly, the theology inscribed in the Westminster Standards.  His philosophy was rooted in the same sources.  For such reasons, he has been called “The Presbyterian Philosopher.”  That, of course, is the title of Douglas Douma’s definitive biography of Clark.  In terms of his life, Clark spent his days at his desk writing, in classrooms lecturing, and in Christian circles discussing, defending, and debating theological and philosophical issues.  A family man, he enjoyed time with his wife and two daughters, playing chess, and painting (which he worked on but never became proficient at doing).

Most Christians today are unfamiliar with Clark.  Most Christian bookstores do not carry his books. Many pastors are unfamiliar with his work.  Yet, when R. C. Sproul was asked what theologian of our time would be read in 500 years, he answered, “Gordon Clark.”  The fact that his books are not the most popular, most read, and most often quoted says more about problems of our times than it does about the man himself.

In our theology class at Veritas Academy, we recently read Clark’s short book In Defense of Theology together.  I know that this was a challenge to the students because, even after having read it few years prior to this year, it was a challenge to me.  Clark was a precise and clear thinker, but not one who could write on a popular level.  His writings take some work, but with some persistence and a few helps, reading Gordon Clark can be quite rewarding.

Clark’s main contention in the book is that theology is something all Christians should both respect and learn from.  While he devotes portions of the book to answering atheists and Neo-Orthodox people, he returns frequently to his primary audience.  He wants regular Christians to read the Bible with some theological skills.  While he was an intellectual and an academic, his goal was edification of the believer and not simply the accumulation of knowledge.  Clark affirms, “Scripture tells us about God; therefore, we should study it.”  This will entail learning verses relating to a particular topic.  While memorization is good, it is also necessary to mentally bring the verses together to make a whole or more complete thought on the topic.  Here again, the message is that theology is essential.

Much of the Bible is given in historical narratives.  Other parts consists of laws or poetry, which is sometimes called wisdom literature.  Theology takes place when the reader “connects simple historical events with their theological significance.”  One might think of the progression of rulers and prophets in such books as First and Second Kings.  On the one hand, such stories are full of interesting figures and ups and downs of Judah and Israel, both politically and morally.  Theologically, however, the events pertain to God’s covenant with Israel, the promise of a Messiah to come, the keeping of God’s law, and the providence of God. So, a person can read the Bible while professing to steer clear of theology, but to understand the Bible, to see it as a whole, theology is necessary.

While Clark is concerned about the average man in the pew who may not think theology is necessary, he also sees the need to address those opposed to theology on other grounds.  In our day, there have been several public figures who have attained status as our public atheists.  This is a far cry from the day when the late Madelyn Murray O’Hara was the key spokes-person (loud mouth) for the cause.  Clark died before the current figures were prominent, but the arguments against atheism are pretty much the same old recipes.  Of more concern to Clark were the Neo-Orthodox and, in particular, Karl Barth.  The German Barth had a major impact on lots of evangelicals in the United States.  The Barthian tidal wave was slow in coming due to the necessity of translating his work from German to English.  (On might think further translation was still needed from English to comprehensible English.)  Along with Cornelius Van Til, Clark was incensed by the pattern of Neo-Orthodox theologians undermining the language and meaning of theology and undercutting the authority of the Bible.  (For more on this, see Douglas Douma’s essay found HERE.

A key chapter in A Defense of Theology concerns logic.  Clark not only wrote a book on logic, but he was driven by the topic.  In short, he believed that God is logical, God’s Word upholds logic, and that logic can be used to unlock or defend Scriptural doctrines. In a discussion of logic, Clark shows how logic undergirds key passages from the Bible.  He is convincing in making the case that Christians should be able to use skills honed in logic to work through the Scriptures.

Gordon Clark was not a popularizer or an easy author to read. He lived and battled in a time when Reformed theology was relegated to the sidelines or consigned to the dustbin of history.  I doubt that his books ever sold in large numbers, but he plugged away, writing, teaching, and adhering dogmatically to the truths that sparked the Reformation and that are founded on the Bible.  Trends come and go.  They did before, during, and after the time of Gordon Clark.  He didn’t budge.  He was steadfast and unyielding.  Perhaps he could have soften a few edges, and in our time, that might be advisable in our times.  But God raised him up in a different era.  Nevertheless, the books remain ready and waiting for us to read and use in our times, in our circumstances.