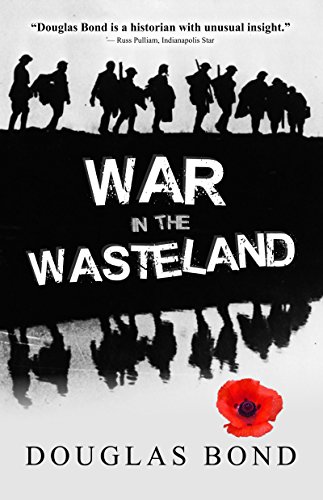 I recently read Douglas Bond’s War in the Wasteland after having read and taught through his book Hostage Lands.  As it turned out, War in the Wastelands, which is about World War I, was just the right book to tackle while simultaneously reading from some other World War I works, such as The Guns of August by Barbara Tuchman, World War I by Michael Howard, and All Quiet on the Western Front by Erich Maria Remarque. And currently I am reading Never in Finer Company by Edward Lengel, which is about an American battalion that was caught in the middle of the Meuse-Argonne offensive.  (I will be posting a review of this book soon, D.V.)

With more books at hand, I could easily get caught up in a year or more of reading on World War I.   But the pressures of school will lead me on to other events in the 20th century.  This is the time where I will discuss Bond’s novel.

Douglas Bond has carved out a much needed niche in writing books chocked full of history, but told in fictional form and suitable for younger Christian readers.  I hesitated about that last phrase “younger Christian readers” because it might tend to ward off adults from reading his books.  Let me repeat this saying (without knowing who to give credit to for saying it):  A good children’s (or teenage or young adult) book is one that grown ups can read and enjoy as well.  Some books are not good for us at certain ages.  Of course, some books are not good at any age.  Elie Weisel’s Night is a powerful and painful book, but not one that should be read to the wee little bairns as they are cuddled up in blankets about to go to sleep.

I think that the statement found on the cover of All Quiet on the Western Front is quite true:  “The greatest war novel of all time.”  I loved teaching this book to my high school students, loved reading it for the fourth or fifth time, loved writing the student exercises for Omnibus VI: The Modern World on the Remarque novel. That being said, it is not the book I would want to teach to junior high students about World War I.

Douglas Bond, as I previously implied, has written a whole shelf full of books on history.  History textbooks should have a warning from the Surgeon General on the front cover:  “Warning:  This book might contribute to a dislike of history by the student.  Contains many dry facts, maps, dates, etc. that will possibly hinder an unrestrained love of the past.”  Granted, I love history books, but it was a teacher, World War II documentaries, and stories, stories, stories that wooed my heart away from childhood fantasies to envisioning a future teaching history.

Bond is a story teller.  He does the historical research, carefully looks over the time and settings, and even calls forth a few actual historical figures for some cameo appearances.  He then crafts a story that will be entertaining in and of itself.  But the story is lodged within the greater story of the actual history.  G. A. Henty did this same thing in his 82,000 (I may have exaggerated) formulaic history novels.  Michael Shaara did it in Killer Angels and his son Jeff has produced a number of volumes on various wars.  Bernard Cornwell has written dozens of novels on historical events, including the Saxon series which I have been reading and collecting for several years.  And some Russian guy named Leo Tolstoy is reputed to have written something about some war and the peace that followed relating to Napoleon and Russia.

Bond’s appeal (aside from the fact that his books are 1 one thousandth the length of Tolstoy’s) is that he is writing specifically Christian books.  He is not dropping a Christian message from the sky into an otherwise pagan setting.  Nor are his books crafted so that all the participants come forward in an altar call in the last chapter.  He writes about Romans and Celts, Scotsmen in Scotland and the American colonies, Protestant Reformers, and others who would have been influenced by, aware of, and often converted to Christianity.

War in the Wastelands is about a young recruit in the British army named Nigel Hopkins who is sent over to France along with thousands of other Brits to join with the French in fighting the Boche (Germans).  World War I, after a month or so of maneuvers and movement (see Guns of August) settled in to being four years of trench warfare, a war of attrition, a war of little movement, much death and destruction, and lots of futility, waste, and angst.  Battle lines moved back and forth by a small number of miles and large numbers of casualties.  In fact, having read several accounts lately, the numbers have reached a point of not even registering in my mind due to the incomprehensibleness of so many deaths.

Young Nigel and his dog (part of the story) happen to be in a unit where there is a soldier named Perret, a sergeant named Ayres, and a lieutenant named Johnson.  These were (unlike Nigel) based on real people who served in the war.  You may have heard of them.  I had, but did not realize it.  They appear (briefly) in such books as Surprised by Joy, Mere Christianity, and other works by another real historical figure in this book.  That was C. S. Lewis.  Like his friend Tolkien, Lewis was a soldier in the war.  He was an officer; he was wounded; and he was an atheist at the time.  (Yes, there are atheists in fox holes, which were actually called funk holes in that war.)

Lewis, while talking about literature, citing lines from his poetry, and bantering with others, is questing for more than survival in the war.  The seeds that came to fruition are told of this book.  Did any of it actually happen in this way?  Read Surprised by Joy and see.  Until then, the answer is “No, not exactly like this, but what the book includes is part of the real Lewis story.”

This book makes for a helpful read for those wanting to learn about World War I.  It is good supplementary fiction, free from the textbook dangers mentioned above.  It is also a good look at the life of Lewis and the thinking that formed his mind in his pre-conversion years.  It is also a testimony to faith.  As much as I love All Quiet on the Western Front, I ache for the souls of the characters in that story.  Not so in this book, although not everyone dies trusting God.  Above all, War in the Wasteland is an enjoyable story which is the key purpose of a book.

News Update:  Douglas Bond’s newest book The Resistance, which is about World War II, is coming out and is available right now alongside of War in the Wasteland for $25.  Great for a Christmas gift to your kids, your history reading friends, and for that special someone who really likes books–yourself.