Never in Finer Company: The Me of the Great War’s Lost Battalion by Edward G. Lengel is published by Da Capo Press.  See HERE for details.

Here is my experience in reading this book:  I have been teaching on World War I for the past month or so in my Humanities class on the Modern Age.  We have been reading from Barbara Tuchman’s Pulitzer Prize winning book The Guns of August.  Then the class read Erich Marie Remarque’s great novel All Quiet on the Western Front.  I have been lecturing, passing out maps, and showing a few documentaries as well.  To further my own reading, I read Douglas Bond’s novel War in the Wasteland, which I also reviewed on a previous blog.  Also, I read Michael Howard’s book  The First World War: A Very Short Introduction.  More books were and are being stacked on the desk.

In the midst of it, I had dug into Never In Finer Company, trudged along for 140 pages and realized that it wasn’t just a battalion that was lost in the Great War.  I was lost in the book.  I wondered if the book itself was the problem.  But, I started over.

Nope, the book wasn’t the problem.  It was the reader.  I quickly retraced the ground that had been lost while I retreated from page 140 back to the beginning.  The story began coming together much better.  (Too many irons in the fire, or books on the stack, had derailed my earlier effort.)  This book was being read during one of my favorite reading times in the day:  When I go to bed.  Reading doesn’t put me to sleep; instead, it brings a great closure to the day.

Often, I have a biography or book on history to read during this late night jaunt, and I have a page-turner novel.  I read the non-fiction and enjoy it, but get a little more delight out of the plot twists of the novel.  But this book began outshining the fiction reads.  As the Lost Battalion was holding its own against the Germans, while facing hunger, thirst, and imminent death, I was entranced with finding out what was going to happen to them.

If this had been a fictional account of soldiers in wartime, it would have make a first class story and could be an incredible movie.  But it is even better.  It really happened.

World War I is so overshadowed by the Second War.  The machines and weapons of WWI seem so awkward, the films portray men walking like Charlie Chaplin, and the sheer static nature of so much of that war leads to a sense of despair.  In World War II, soldiers where capturing something.  In World War I, they were wasting away in the trenches, or so it seems.

Americans began training for the war some time before we actually entered.  The nation entered the war with little actual understanding of the costs, the tactics, the enemy, and the course of the war.  The United States was woefully short of weapons.  As has often been the case, we did have the old “can-do” spirit and the assurance that the Europeans just didn’t know how to wrap this thing up.

When the American army was finally able to be its own military unit under General John Pershing, the prevailing strategic idea was “advance.”  I suspect that had we entered the war one to two years earlier, we would have had our own “Battle of the Somme” or Verdun (referring to British and French battles with incredibly high casualty rates).  When we did take to the field, the German army was largely already beaten or worn down, but it was more like a trapped and wounded grizzly bear than like a dead chicken. 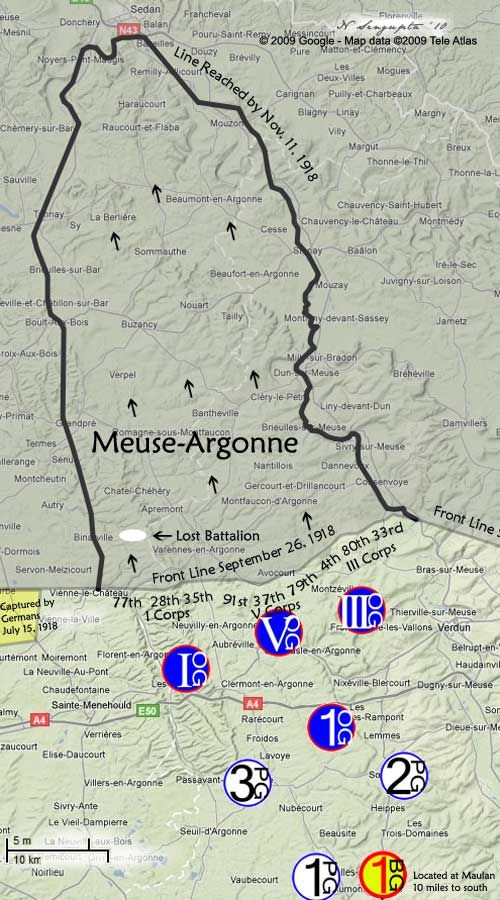 Advance was ordered by the Americans, and advance they did.  The “Lost Battalion” consisted of about 600 men who were part of the 77th or Metropolitan Division.  The battle was known as the Meuse-Argonne Offensive.  It was a great victory–in the long run–for the Americans, but it was no cake-walk.  The Lost Battalion was surrounded by the Germans and completely cut off from supplies, reinforcements, a line of retreat (which was unthinkable anyway), and even communication.

The heroes included a couple of officers named Charles Whittlesey and George McMurtry.  Neither man was a soldier by profession. Both were conscientious, self-less, and unhumanly brave.  Of course, the soldiers on the ground were heroes as well.  Many were threatened with death–either directly or by infection–from lightly or untreated wounds.  All were hungry, thirsty, and without any comforts.

In the best of military traditions, city boy and country boy, Christian, Jew, and non-believer, educated and uneducated men melded together and fought for all they were worth.  I must confess to being thrilled when Lengel described one of the later attacks by the Germans.  The Americans, in danger now of running out of ammunition, were hurling curses across the field to their enemies.  They didn’t yield an inch.

Rescue finally came to what was becoming a center of media attention–the Lost Battalion.  Several soldiers were sent through the lines to contact the main American forces and guide them to the soldiers under siege.  One hero of the story was a pigeon, named Cher Ami, who was badly injured in her flight carrying a message from the battle back to headquarters.

As if this story itself were not enough, there is another part of the larger story that Lengel includes.  I supposed I have watched and used the movie Sgt. York three dozen times in my years of teaching history.  Alvin York was not a part of the Lost Battalion, but his heroic exploits, which won him fame and resulted in the movie version of his story, took place as the rescue was being effected.  York’s story is told here as well. 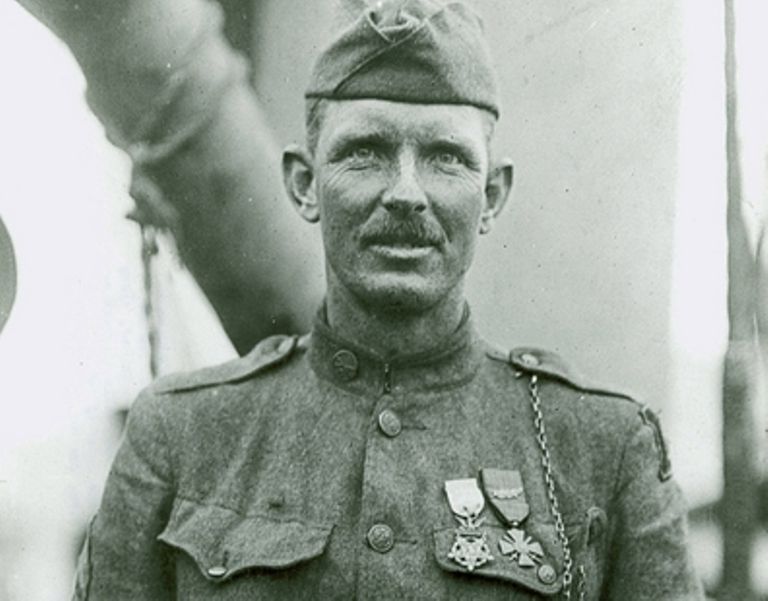 I am all for honoring heroes and this book is full of them.  But life and history is never quite that simple.  There were commanders who were out of touch with what was happening.  There were cases where responsibility was shifted by those seeking to escape blame.  When the battalion was rescued, there were some who were ready to capitalize on the successes.

Post-World War I resulted in plenty of cases of men suffering from the effects of the war.  Again, this is often forgotten.  The Great Depression and World War II trumps the first war and the post-war period.  Yes, lots of men, like Alvin York, returned home, married their sweethearts, had a family, and worked.  But even his life was more complicated than that.  Some like Charles Whittlesay never recovered from the war, the memories of the death and cries of pain, and the feeling of guilt as a commander.

These men were a fine company, and this book, despite my initial bad start, is a really engaging account. 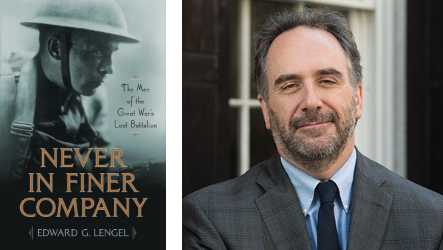 One thought on “Never in Finer Company by Edward G. Lengel”