Thankfully, my current dog, Callie (same color but totally different breed than the one pictured above) is not a book lover, chewer, eater, etc.  Books are safe around her, although she expects me to toss her rubber ball with one hand while I hold a book with the other.  In this post, I will return to my confession of unfinished book readings and reviews.  I am trying, but cannot seem to catch up.

These unread, unfinished, unreviewed, and in some cases, unstarted books are still awaiting me with the patience of the printed page.  Books hold treasures in silence just waiting until that time when they can speak the messages they contain.  As the saying goes, any book is new if you have not read it yet.  But I would like to comment a bit on these fine volumes.

We begin with My Ranch Too: A Wyoming Memoir by Mary Budd Flitner is published by the University of Oklahoma Press.  (At this time, this book is on sale from the publisher.)

The University of Oklahoma Press is well known for its outstanding books on military history (many of which I have reviewed), it classical studies (some of which I have reviewed), and, not surprising, its books on western history and culture, with lots of focus on Native Americans (and some of these I have reviewed as well).  My Ranch Too deals with the trials and struggles to maintain the ranching lifestyle in the western states.  The story here is of a Wyoming family and the ranch they have maintained.

As a Southerner with Agrarian affinities, I have a strong sympathy for the culture and life found in the American west.  I wish I could fit in with it, but I reckon I am too indoor-ish, sedentary, and cold natured to be spending time on a horse riding over vast, cold ranges in search of strays.  The loss of the American west, often heralded by many a country-western singer, is the loss of so much that is central to American culture.  For that reason, I look forward to this read.

For many years now, I have been relishing the writings of Flanner O’Connor.  My only complaint against her is that she is so popular that one can hardly come up with something profound to say about her that hasn’t already been said.  I was surprised when I discovered a few months back that the University Press of Kentucky had a book titled A Political Companion to Flannery O’Connor, edited by Henry T. Edmonson III.

I know a remarkable man of literature at UPK named Mack McCormick.  He is the Publicity and Rights Manager for the press, and he also writes reviews and promotional pieces for different works from the press.  In other words, he has one of the neatest jobs in the world: He makes a living dealing with books.  Mack and I share a love for quite a few things in the book realm.  Particularly, he and I both like the works of Jesse Stuart, and he has further nurtured my appreciation for the writings of Kentucky author Janet Giles.

He graciously sent me a copy of the O’Connor book, although I grumbled about some shoddy work in the packaging department that caused a bent page or two.  (Forgive me for being so picky.)

I would have guessed that a book relating politics to Flannery O’Connor would be either impossible to write or too short to even be a chapter in a book.  But she is so easy to underestimate.  She had an incredible grasp of literature, a wide ranging understanding of philosophy, and quite a bit of depth in theology.  Life in the American South in the 1940s-1960s was political.  Life in the South both before and after the War Between the States was and is political.  Life is political.  You don’t have to be reading, writing about, or talking on politics to make political statements.

This book has chapters devoted to O’Connor and the Agrarians, O’Connor and segregation issues, and the issue of Civil Rights. On chapter even makes reference to my favorite term that is often used of O’Connor–“Hillbilly Thomist.” I am looking forward to delving into this book.  Of course, I have not met a book by or about O’Connor that was not of interest, but this one holds lots of unexpected revelations.

Of course, one doesn’t usually associate the name George Armstrong Custer with humor.  I year or so ago, I read a good biography of Custer, and I learned that the man’s career involved a lot more than the terrible ending associated with it.  Unlike many biographies, however, I did not finish the reading with a greater appreciation for the man.  Brave, flamboyant, and dashing, he was not a very admirable man.

I learned of this book from historian Bradley Birzer who spoke of how enjoyable it was, so I requested a copy.  Honestly, if Birzer likes it, it is probably endorsement enough.  My own review will come later; actually, I hope it comes sooner, rather than later.

Armstrong is published by Regnery Fiction. 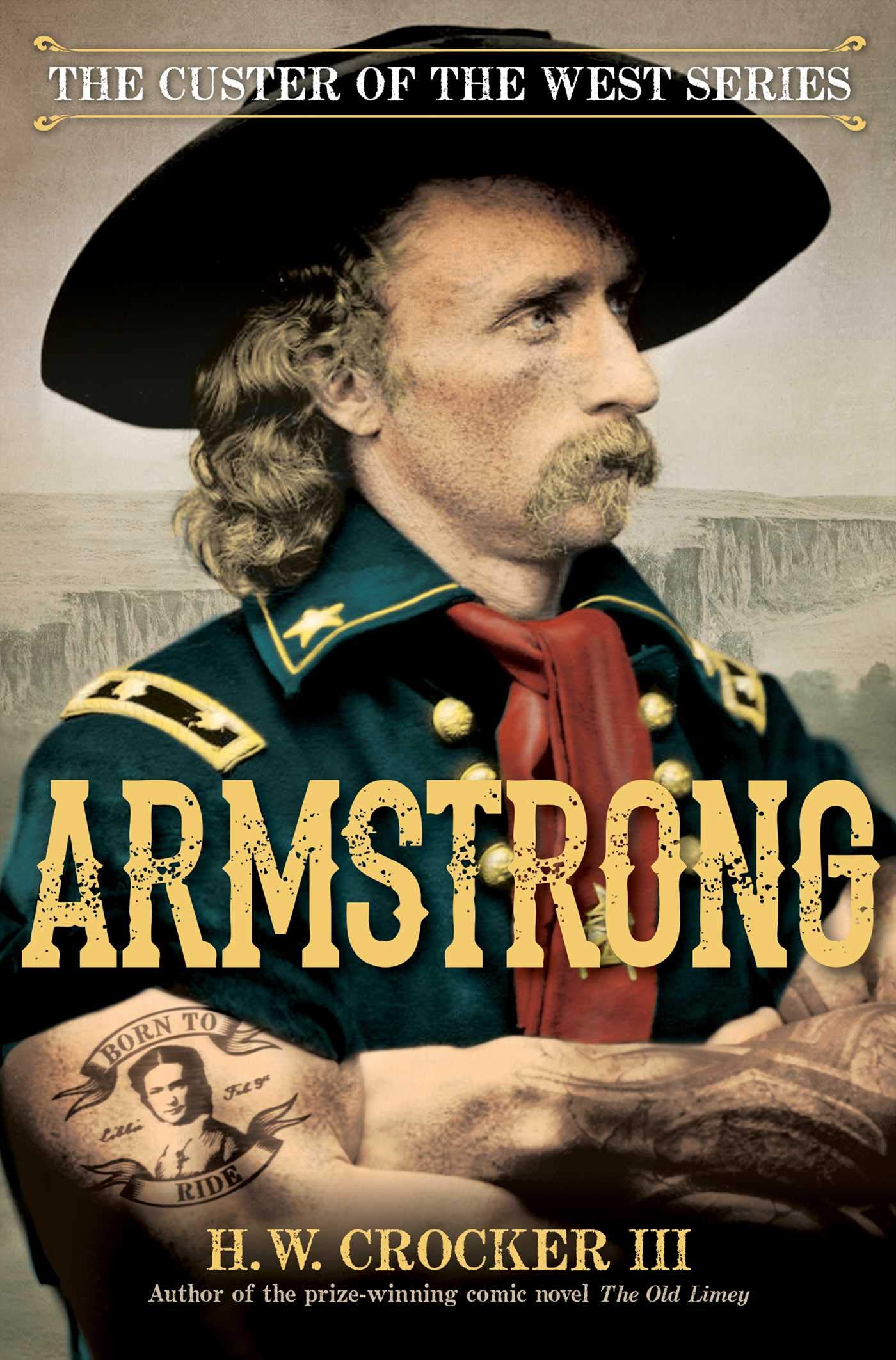 The next two books are high on my list of priorities.  In part, I am interested in these books because I have gotten acquainted with the man who wrote one of them and helped edit the other–historian Michael Douma.  Earlier this year, I read and reviewed Douma’s book How Dutch Americans Stayed Dutch.  This was an academic read (with an academic press price tag) that should have been just a dusty, dry scholarly examination of a thin slice of history.  But it was an enjoyable story.  Along with his writings, I have come to appreciate Dr. Douma for his incredibly unrestrained wit (usually displayed in the wrong setting), his rugged mountaineering lifestyle (with a rustic home and barn he is restoring), and his often brilliant insights into life, history, and academia (with forgiveness for some of his mental lapses).

What is Classical Liberal History? is a collection of essays by historians dealing with a particular viewpoint regarding history.  I have often lamented the fact that I got a history degree without any professor cornering me and demanding that I study historical perspectives, historiography, and a philosophy of history.  Maybe that is because it was an undergraduate degree.  But think about this:  Young teachers step into the classroom to teach kids history all the while thinking that history is just a bunch of facts that they need to inflict upon the unwilling natives.  I did have a worldview–dominated by my Christian/Calvinistic/Conservative/Southern viewpoint–and I did have a sense of not only the who, what, where’s of history, but the why’s and therefore’s.  My own worldview was never truly honed by enough real scholastic gladiatorial combat.

I feel a certain kinship with the book Creative Historical Thinking.  This feeling comes from having been a witness–from a distance–to this book as it went through the process of being finished and published.  As I have often whined about, I was asked by Michael to write a blurb or endorsement for the book.  I read a PDF copy of the work a long while back and let the author know that I had nothing but praise for it.  Then I wrote the endorsement.  But the powers that be felt that an academic book such as this one needed endorsements by real scholars, with real degrees, and academic standing.

The description on the website says, “Author Michael J. Douma makes the case that history should be recognized as a subject intimately related to individual experience and positions its practice as an inherently creative endeavor.”  But please don’t let that somber, serious, weighty statement blind you to what this book is about.  This book is about the fact that history–taught, read, learned, lived–is fun, but dangerous.  History is a recreational drug that can add to quality of life, but often as taught by us teachers is quite dreary.

History teachers, read this book–before and during your days in the classroom. It really should have been pitched more to classroom teachers and good old Joes like me, rather than to the elite historians with Dr. before their names and Ph.D. after them.

Alfalfa Bill: A Life in Politics by Robert L. Dorman is another fine work from the University of Oklahoma Press. (And it is on sale right now–40 percent off.)

This book fits a particular love I have:  Political history.  I read plenty of books about Presidents and about the larger movements across the pages of history, but I have always enjoyed the biographies of the lesser known or largely forgotten people in history.  William H. “Alfalfa Bill” Murray was a colorful figure in Oklahoma political history in the 20th century.  He was an old time Democrat, ladened with all the qualities and faults of Democrats of his time.  This too should be a fun read. The Red Wheel March 1917 is published by the University of Notre Dame Press.

The delay on getting The Red Wheel: March 1917 by Alexandr Solzhenitsyn read is due to its daunting nature.  It is a large book by a bigger-than-life author, Nobel Prize winner, dissident, Christian humanist, and enemy of totalitarianism Alexandr Solzhenitsyn.  I am hoping to plow into this book deeply in January and February since I will be teaching and reading about Russian history and authors in my Humanities class at that time.

Solzhenitsyn has been a hero of mine since my senior year in high school.  That was the time when he was rousted out of his beloved Russia and sent into exile in the West for the next several decades.  I have read many of his works, but his most ambitious series is the Red Wheel which consists of multiple volumes of fiction (heavy laden with history) dealing with the Russian Revolution.  The earlier volumes included August 1914 and November 1916.  From what I have learned, it is not necessary to have read those before tackling March 1917.  I think it is time to take on this challenge.

2 thoughts on “The Dog Ate My Homework: More Unreviewed Books”