The Normandy landings, D-Day, June 6, 1944, of which we are now remembering 75 years later, did not begin on that date.  Long before General Eisenhower gave the nod, amidst the dour weather reports, to proceed, actions had been taken to help make that landing a success and a stepping stone toward the defeat of the Third Reich.

Besides the immense amount of work that was going on in planning and training sessions on both sides of the Atlantic, there was a massive air campaign that was designed to impair and cripple Hitler’s war machine.  People still debate how effective the air offensive was and question the ethics of some of the bombing targets, but that debate is much easier to conduct long after the war has ended.  Certainly, lots of German men and materials were concentrated on battling air raids, and that kept those same men and weapons far from either the eastern or western fronts.

Resistance movements were at work all across occupied Europe.  Whether they were sending inside information about troop movements or sabotaging their oppressors, they were able to chip away at the enemy.

World War II, even if just restricted to the European theater, is simply too big, vast, and overwhelming a subject to grasp.  We are endlessly fascinated by it.  The remaining veterans are now few in number and feeble.  The world conflicts have moved on to new and other ugly threats.  But we still find so much that is full of wonder, amazement, horror, and conviction when looking at the Second World War.

I could easily recommend dozens of books, authors, movies, and documentaries that fill in gaps on the story.  I have been reading about the war since 1970, not realizing at that time that it was so very recent.

In this case, I will focus on just one book as a way of exploring the war.  This might be especially helpful for those of you who are teaching your children at home, teaching in a classroom, or just looking for a good read that is informative, enjoyable, and uplifting.

The Resistance by Douglas Bond is published by Inkblots Press.  Mr. Bond’s website is www.BondBooks.net.

Douglas and I became friends via social media last fall after my class read Hostage Lands, which is an historical novel about a Roman soldier and a Celt warrior who get acquainted in the region around Hadrian’s Wall in England.  We all loved the story, and I felt that making contact with Douglas was long overdue.

Douglas Bond has created a whole shelf of historical novels, along with some biographies and Christian music.  He is a Christian writing machine.  What G. A. Henty did in the past (without following a set formula like Henty) and what Bernard Cornwell is doing in the present for adult audiences (without Cornwell’s brutish realism), Douglas Bond is doing for young readers in our time.  But remember the necessary guideline for writing good books for younger readers:  The book has to be enjoyable for older readers as well.  If the parent reading the book sees that it is garbage, the child on the knee who is listening doesn’t need to be subjected to it.

That discussion of books for young people aside now, let’s look at The Resistance.

This book is something of a sequel to War in the Wasteland, which is Bond’s book about World War I.  I say “something of a sequel” because they are not about the same characters with the same developing plot lines.  But War in the Wasteland deals with an individual soldier and his comrades in the First War, while The Resistance focuses on several individuals in the Second War.  Besides the war themes, the other common denominator is C. S. Lewis.  Lewis the soldier was in the first book, but during World War II, he was on the radio–by request from the BBC–giving lectures on a surprising topic–the Christian faith.

Lewis’s radio talks are the recurring background story in this novel.  The main story is about a B-17 crew that is shot down over France.  Only two crew members survive, and they are picked up by the French Resistance.  From there, there are search and chases and narrow escapes, bloody wounds, ambushes, concealments in strange places, internal conflicts, and—a developing love story.  The two main characters, Eli Evans the pilot and Charlie Tucker the navigator, share a number of harrowing experiences and confrontations with good and evil.  Tucker is a good ole southern boy, deeply rooted in the faith.  Evans has learned to pray during the war out of the fears and dangers, but is only slowly awakening to who God is.

This book is a good adventure into some real history, real conflicts, and the reality that supersedes even World War II.  I started the book by reading a few short chapters at a time, but soon found that I could not put it down.  Can’t wait until the next Bond book appears. 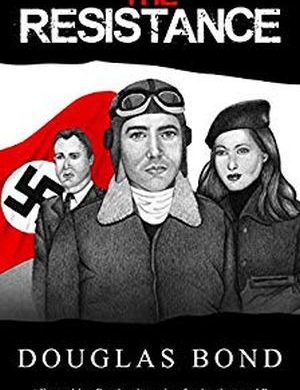