I confess that I feel like I have never been properly trained in the field of history.  Been teaching the subject for forty years and reading history for longer than that, and yet I always feel this gaping gap in my own training as a history student.  Perhaps it is common for undergraduate students to just take enough random history courses to get a major in the field.  And having garnered quite a few graduate hours in history, perhaps it is common there as well.  But it just does not seem to be the right approach.

Future history teachers and historians ought to be grilled from the beginning on what history is and is not.  They ought to be grilled in the various schools of interpretation, forced to uncover the presuppositions of authors they are reading, exposed to various viewpoints, and made to dig deeply in primary sources. If that isn’t enough, they should also have to read some of the older historians, such as Edward Gibbon, George Bancroft, Thomas Babington Macauley, and Francis Parkman.

But I have run too many miles in this marathon to start now thinking about what shoes to wear while I am running.  But I will make the call once again for the teaching of history as a subject to history majors.  I am, even this late in the race, still reading books about the field of history and the study of it.  I still aspire to be a historian.  Up to now, I still consider myself a history teacher.  The history teacher can be a story teller, a lecturer, a martinet who imposes history upon unwilling subjects, and an entertainer.  (I think I fit all of those categories.)  But a historian has to dig deeper, think more, and do better than just recite facts.

A Little Book for New Historians: Why and How to Study History by Robert Tracy McKenzie (professor of history at Wheaton College) is published by IVP Academic. 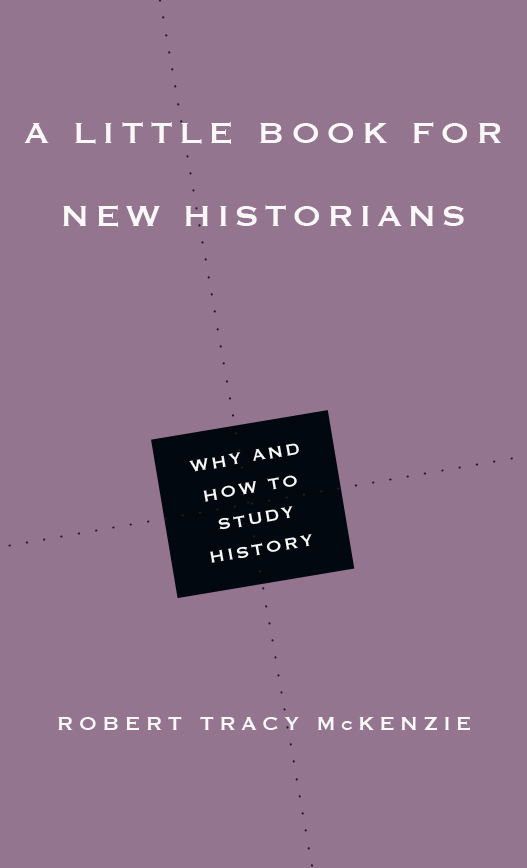 This book is a part of a series of books, all sharing the words A Little Book for New ____________ in the titles.  Intercollegiate Studies Institute and Crossway Books both have similar series of short, introductory works on various academic areas.

McKenzie’s book is a very fine introduction to the topic of history.  For a more in-depth review than I will attempt, read what historian Michael Douma says on his blog review–found HERE.

The first point, which has to become second nature to a history student, is that history is not a study of the past, but rather is a study of what (little) we can know or uncover about the past.  McKenzie says, “If that wall of water plummeting downward is analogous to ‘the past,’ then the drops you can catch in a paper cup represent history.”  We may have lots of official records, personal memoirs, letters, and snippets of knowledge about World War II, but we cannot even discover all of what happened to any one person in that war, be it a famous leader or an obscure private.

For me, history and the presuppositions of the Christian faith are merged.  By the way, this book, as all of the series, is setting forth distinctly Christian ways of viewing history, although I would reckon that a non-Christian could find much agreement in it.  Back to my point, I am not saying that being a believer gives me “the truth” about historical events.  Nor can Christian history folks take the causes exit marked “God ordained it.”  Rather, the Christian has to be overwhelmingly humbled by studying history.  What you usually learn from an in-depth study is how much you don’t know.

McKenzie emphasizes the importance of Christian love and charity when dealing with historical figures.  This week, a story has been trending about a series of racist comments that were made in a conversation between President Richard Nixon and then Governor Ronald Reagan, many years ago.  I love Reagan (and Nixon to a much lesser degree), and it is important that I examine the times they were in (the early 1970s) and the issues.  The fact that this was a private conversation is important as well.  None of this excuses either man, but we have to recognize that people of the past do not inhabit the same atmosphere we do.

I have often heard fellow Calvinists quote R. L. Dabney’s comments on conservatism: “What was the resisted novelty of yesterday is today one of the accepted principles of conservatism…” (Found here.)   Good quote and true enough, but I grew weary of hearing my fellow Calvinist friends repeat this as a way of not supporting the more conservative political candidates of our day (the William F. Buckley principle).  But Dabney would have voted for John C. Breckinridge, most likely (or else John Bell), in 1860 and would have preferred Seymour over Grant and Tilden over Hayes.

Related to this are the efforts we all make to lionize or demonize Founding Fathers on the basis of current political situations.  To link current spending policies with Alexander Hamilton is not doing history.

Alas, I am straying away and preaching too much here.  Concerning the use of primary sources, the need for being humble and teachable, and the willingness to really try to listen to the sources are all key points of this book.

Great introduction to “funnest” subject on earth to study.

Since we are on the subject of history, and since I have previously mentioned Michael Douma’s review of the book above, I should once again herald his outstanding book Creative Historical Thinking.  This book really helps the history student sort out how our minds work and interact with history.  Besides, Michael does something that is absolutely awful for an academic:  He inserts wit all through the book.  So, you start out thinking this is going to be serious, sober, somber, and searching, and you discover that it is funny and full of practical wisdom.

Don’t set foot in a history classroom without having read Creative Historical Thinking.

There are other books I would recommend concerning the study of history, but I will save that venture for another day.