The Essential Karl Barth: A Reader and Commentary by Keith L. Johnson is published by Baker Publishing Group.

Karl Barth was one of the most influential theologians of the 20th Century.  He remains one of the more controversial theologians as well.  I have no way of knowing how much influence he still has or will have over the next few decades.  Theology is not my field of specialty.  I watch the high dives while wading in the shallow end of the pool.

I figure that many pastors, teachers, and theology students are not all that different from me in their familiarity with Barth.  We have heard the name.  Often it is resounding in phrases like “Bultmann, Barth, and Brunner.”  Add Tillich to the mix and you have the Four Horsemen of the Apocalypse who either spread wisdom throughout the Christian world or who spread evil.

In my background in very conservative Reformed and Presbyterian circles, Barth (and company listed above) were not admired and were seen as the enemy of orthodoxy.  Two of my great theological heroes, Gordon Clark and Cornelius Van Til (pictured below), both wrote books critiquing…let’s be more blunt…critically condemning Barth’s theology.  These two men, dogmatic as they could be, were not simply off on a rant.  There were elements in Barth’s theology that were not merely different perspectives on truth, but were undermining of the same.

I must confess that in my life experiences (which have been limited), I don’t recall ever running into a bona fide Barthian.  I don’t recall hearing him quoted either.  That was all true for many years, until one occasion when I was working on a lesson prior to Easter.  I needed a quote from a heretic who denied the resurrection.  I went in search of Barth denial and was struck by the fact that he affirmed it.  I mean a bodily resurrection of Jesus the God/Man and not some mystical sense of “the spirit and teachings of Jesus lives on.”

It was around this same time that I learned that my friend P. Andrew Sandlin, a man who had worked alongside of R. J. Rushdoony, was an admirer of Barth.  And then, the more I searched for the quotes on all subjects, the more I discovered that Barth didn’t just happen to say something true and good every now and then, but he did so often.

Karl Barth wrote a large number of books, many of them quite weighty and lengthy.  He was a dominating theological force both in European and North American circles.  If you go around the theological blocks a time or two, you will encounter quotes, references, critiques, praises, and condemnation of Barth.

I often think (and maybe regret) that I did not pick a particular theologian or Christian thinker to be to focal point of my own reading and study.  Instead, I have flitted from branch to branch, reading a book by this person, a biography of another, and many quotes and references to all the big names in Reformed circles with a few outside those confines.  If I could pick the theologian to study and devote years to trying to master and understand, it would not be Barth.

That is why books like The Essential Karl Barth are so useful and necessary.  I ascribe to the idea that most pastors need to be theologians and scholars.  Books such as The Pastor as Public Theologian by Kevin J. Vanhoozer and Owen Strachan address these issues. Along with the near impossible task of keeping up with the latest theological trends, ideas, and debates, there is the need to be aware of the past teachers and leaders of the Church.  Very certainly, I would put Augustine, Luther, Calvin, Edwards, Hodge, Machen, and a few others before Barth, but I would not leave Barth out.

One of the most helpful and instructive things about The Essential Karl Barth is the work that Keith Johnson put into giving a helpful sketch of Barth’s life and times at the beginning of the book and then giving descriptions and footnotes to the selections he includes.  I am sure that real Barthians will grimace over what is left out, but I find the amount of information helpful.  In other words, sometimes I have no idea what problem or people Barth is writing about, but the notes set the context and explain what is going on.

I know this for certain, Barth is usually labeled as Neo-Orthodox.  Although he called himself Reformed and he fit into the Reformed tradition in some ways, his theology put him at odds with the more strictly and historically Reformed people that I am associated with.  But he was strongly opposed to the theological liberals of his day.  He was not on a mission against American evangelical or fundamentalist thinking; rather, he was going full throttle against those who denied the supernatural God and the Bible.  He believed that Jesus was the God/Man and that He rose from the dead.  He affirmed much that we believe, and his enemies were those that we would oppose.

I remember reading from John Warwick Montgomery an account of him going to hear Barth speak in Chicago.  Montgomery, a very solid Lutheran, opposed Barth’s theology.  But on this occasion, he was in Barth’s corner as he listened to him skewer the theological liberals. 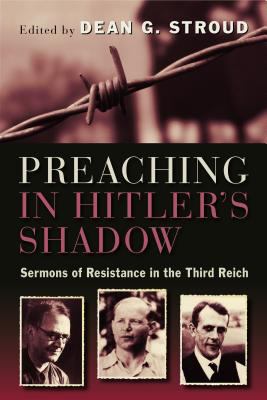 A final point is actually one of my main reasons for being interested in Barth.  He opposed World War I and preached against it.  Then, in the 1930’s, he began speaking out against and criticizing the German Christian movement.  He is often remembered and praised even by his critics for signing the Barmen Resolution.  Alongside other Christians such as Dietrich Bonhoeffer, Paul  Schneider, Martin Niemoller, Barth saw the sham of identifying German nationality and culture with Christianity.  Being Swiss, he was able to escape from Germany.  After the war, he labored to restore the crumbled foundations in European Christendom.