A Christian and a Democrat:  A Religious Biography of Franklin D. Roosevelt by John F.  Woolerton and James D. Bratt is published by Wm. B. Eerdmans.

Merely mentioning the names of Franklin D. Roosevelt in many of the circles where I am involved raises immediate irritation, ire, and objections.  Although he has been gone for nearly 70 years, even people who were not alive during his time are roused to disgust when he is mentioned.  For some, the opposition is due to his New Deal Programs.  Others are suspicious of his handling of World War II from our entry into the war to conduct of the war and on to FDR’s actions regarding the conclusion of the war.  Then there are others who have great concerns over the idea that he was a near dictator, that he was in office to long, that he was conniving, and that he was reckless in his disregard of the Constitution.  Finally, there are plenty of concerns about Roosevelt the man in his private life, especially regarding his unfaithfulness to his wife Eleanor.

Every facet of FDR’s life and Presidency is up for discussion, subject to examination, and open for strong passions.  In my own case, I find that very few Democrats seem to be interested in FDR in any sense.  For them, Democrat Party history reaches all the way back to maybe Bill Clinton.  Perhaps, I simply don’t know or hear from enough Democrats.  But for conservatives–ranging from Reaganites (like me) to more Libertarian types to Christians with political interests–FDR is much more a topic of interest and opposition.

Here is my own autobiography:  I developed an interest in Presidential politics in my young age and quickly adopted FDR as my favorite President.  I was raised in a Southern Democrat home where politics was rarely a topic of conversation.  For most of their years, my parents voted straight Democrat.  (My Dad strongly disliked Hubert Humphrey, but he still voted for him.) I began straying from the old ways when I gravitated toward Richard Nixon in 1972.  It was when I entered college that my whole perspective changed.  Calvinism took a huge chunk out of my previously held and unexamined political thoughts.  One of Johnny Carson’s guests on the Tonight Show helped seal my political fate.  That guest was William F. Buckley, Jr.  A few days after watching that part of the Tonight Show, I checked out Buckley’s God and Man at Yale.

Much of my understanding and teaching was critical of FDR on several fronts.  Yet I never got past a certain admiration for his considerable political skills and for his personal triumph over polio.  As an orator, he was first rate.  As a radio speaker, he was the man of the hour.  As a skillful executive, he was among the best.  None of his gifts diminished his flaws and failings.

An important truth for a history student (or scholar) is that we are not being called upon to vote for, approve, condemn, or justify historical figures.  We are called upon to first understand them.  From a vast factual base, we can try to interpret what they did and why.  Admittedly, we will often have an agreement with their actions or a sympathy for them or a personal liking for them.  Writing hagiolatry (the worship of saints) or writing hit jobs are not the work of serious historians.

When I first saw the book A Christian and a Democrat, I knew this was a book I wanted to read.  It is a part of a fine series Eerdsmans publishes called The Library of Religious Biography.  I have several of the volumes of that series and previously reviewed Damning Words: The Life and Times of H. L. Mencken by D. G. Hart.  The biographies range from the expected religious leaders, like Cotton Mather and Billy Sunday, to unexpected and often political figures, like Thomas Jefferson and William E. Gladstone.

FDR was raised in the Episcopal Church where he remained an active member all his life.  The Book of Common Prayer was always at his bedside, and his copy was well worn.  He was schooled at Groton and was heavily influenced by Endicott Peabody who drilled his charges in academic and spiritual exercises.  FDR sang hymns, even played the piano at services, labored to help the needy and the young, served on the board of his local church, and always included worship services before his taking oaths of office.

One of my favorite pictures is of FDR and Churchill onboard a ship at the Atlantic Conference in mid-1941.  They are in a worship service together and are singing “O God, Our Help in Ages Past” and “Onward Christian Soldiers.”  Whatever else one might think of these two men and their staffs and military joined in worship, this much is true:  Never would there have been a picture of Hitler and Mussolini worshiping together.

Roosevelt’s faith was pronounced and public.  Perhaps more than any other President, he spoke of faith in his addresses and quoted Scripture.  He even led the nation in prayer via a radio address on the occasion of the Normandy invasion.  His was not merely a public and for political gain faith, but was a part of the essential man himself.

Theologically, what was he?  FDR’s faith was shaped by the traditional cadences, prayers, and services of the Episcopal Church.  His instruction was infused with lots of Social Gospel content.  In some ways, the Social Gospel that he absorbed was of the better sort.  By that, I mean that he had a strong commitment to acts of service in the community, among the poor, and help to people in need.  He read quite a bit through the years, but was not a serious reader of theology or of Christian doctrine.  He was active in church as a participant and a lay leader, but said little that could contribute to a statement of faith.  From the book, one picks up little or nothing about his take on theological issues of his day or upon the details of his beliefs.

I suspect that he heard many sermons that were tinged by liberal theology, Social Gospel teachings, then-modern deviations from orthodoxy, and Neo-Orthodoxy.  I never got the sense from the book that FDR absorbed or embraced those teachings.  While relatively well read and well educated, he was not a deep thinker.  Did he believe the fundamentals of the faith?  Did he accept the historic teachings of the faith?  He seemed to be a faithful follower of his church’s teachings and traditions without any comments on them.

The historian cannot probe the heart.  Even the man in the pew or pulpit has to be careful when doing that.  I have trouble probing my own heart, much less that of anyone else.  Of course, we can evaluate what a person professes and how he lives.  That assumes that we can know and hear and see enough of the person’s life and words.

Roosevelt was, at least for one period of his life, unfaithful in his marriage to Eleanor.  Theirs was not a model marriage, although politically they were extremely helpful to one another.  Dr. Woolverton says that FDR was remorseful over his adultery which occurred early in the marriage.  He never mentions or alludes to other cases of unfaithfulness.  One can add FDR’s  other sins to the list, if he wishes.  FDR was notorious for lying, but again one has to look carefully to see when he was outright falsifying the truth or when he was concealing things or being canny for political purposes.  I am not trying to give him or any other politician a free pass to distort truth, but am referring to cases where FDR was compelled to mislead or not answer completely when asked about matters that were sensitive due to the war.

A later chapter in the book deals with FDR’s fascination with Soren Kierkegaard.  An Episcopal minister was invited to dine with the Roosevelts.  At that time, Kierkegaard was not widely read or known, but the evils of World War II had awakened an interest in him by more people, including this minister, named Howard Johnson.  Johnson explained Kierkegaard’s views of sin and evil to FDR who found it all fascinating.  It appears that FDR basically accepted a Cliff-notes-like understanding of the Danish philosopher, but that he found it all helpful in understanding the evil of the Nazis.

To sum up, what difference does it make?  This is far from a summary question, for the relationship of an individual with God is the most important question of all.  And the relationship between a national leader and God is vital.  How FDR responded to both domestic crises (the Great Depression) and international crises (World War II) were shaped by his faith commitments.  What a man believes and how he acts or governs are connected.  None of this means that believers are better leaders or that faith leads to perfect policy positions.

All in all, this book is a fascinating study of a complex and religious man.  This book needs to be supplemented by other more broad biographies of Roosevelt, but it does have a useful focus on a part of his life that will not likely get adequate coverage in the standard biography. 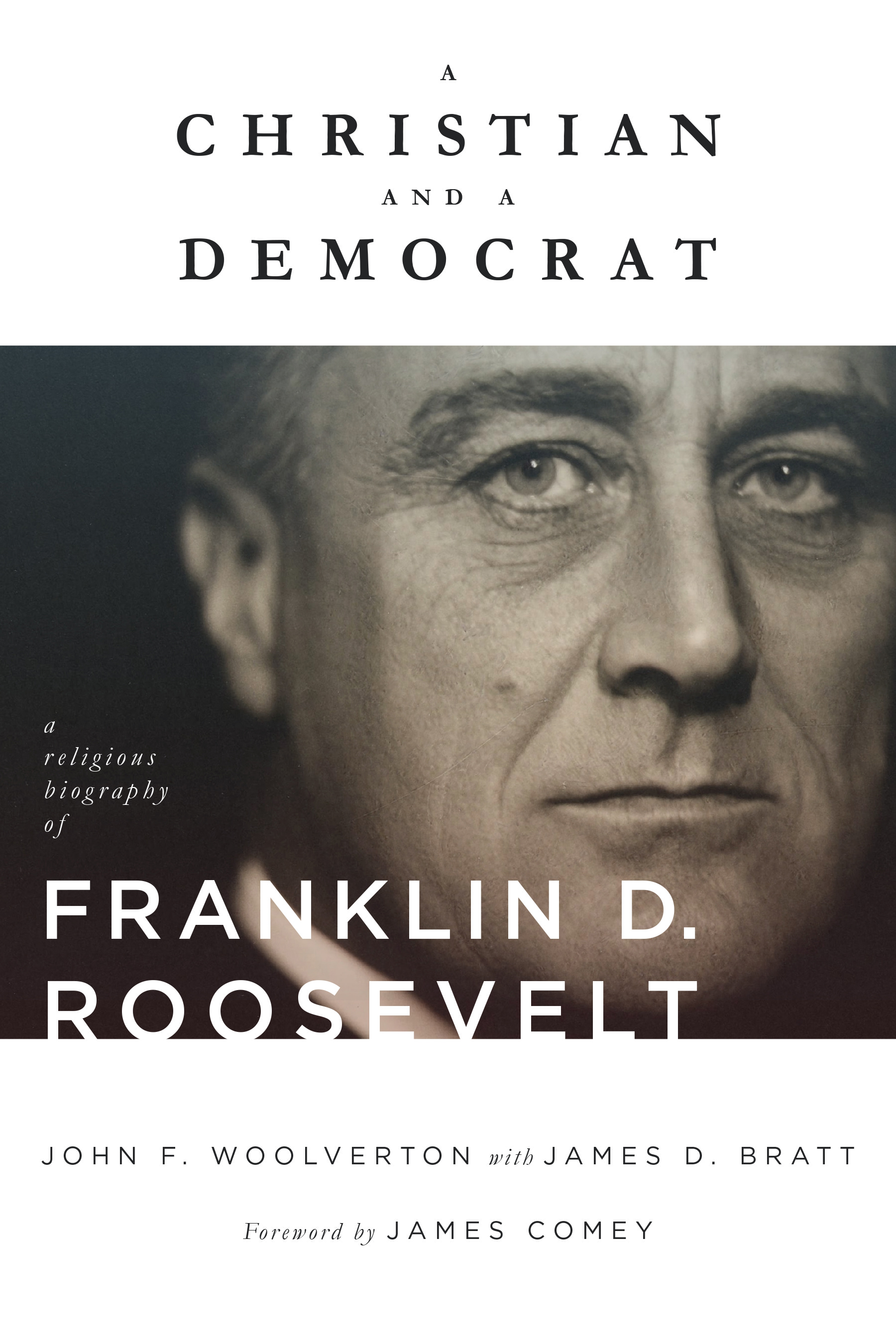