I was completely distressed recently when I heard a literature teacher in a graduate level college class say that she could not remember when she last read a novel.  My working assumption is that the only reason to be a literature teacher at any level is to enjoy reading the novels, short stories, poems, and plays that we love over and over again.  Along with that, reading new or unread classic works is great because one can be sitting down reading and all the while contending that one is working.

My reading tastes range a bit widely, and I wish the ranger were even wider.  One area of particular delight is in reading novels.  For many years, I distanced myself from almost anything that was recent and certainly anything that hit the best seller lists.  That is not a fatal error, but there is a problem in assuming that because so many things of our age are bad that, therefore, everything current is bad.  Good novels are still being written.  Are they great? Are they destined to be classics?  I don’t know.  Few books make the cut of being classics, and even the most respected lists contain some howlers and omit some worthies.

A few years back, I was lured by George Grant into the deep recesses of the intelligence agency of the Israeli government.  Since that time, I have found myself locked into more and more intrigues, conspiracies, thwarting of terrorist attacks, and rescuing of victims of bad cartels, drug and weapon lords, and other international bad guys.  Thankfully, all of this stressful activity was confined to reading the novels of Daniel Silva and his series of Gabriel Allon books. 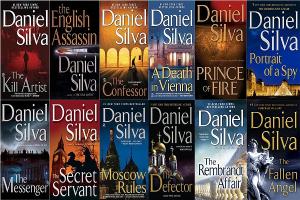 My most recent Silva read was The Other Woman.  I feel like I could be one of the reviewers who always says someting like “Silva’s Best” or “He keeps getting better and better.”  Some of this stems from being more and more familiar with the whole story of Gabriel Allon, his wife and children, his co-workers, the foreign operatives among both allies and enemies, and especially such regulars as Ari Shamron (and his stinking cigarettes and Zippo lighter), Uzi Navot, and Eli Lavon.  The good news is that I have the next Silva novel, The New Girl, waiting on the bedside table to be started during the next mental crisis in my life.  (Word of caution to married Silva readers:  Be careful of someone hearing you talk out of context when you are speaking of The Other Woman and The New Girl.) When the dangers of international espionage are too much, I prefer to get away from it all.  I then head off to Wyoming, to Twelve Sleep County, and enjoy the scenery and the hunting seasons there.  Of course, Joe Pickett always shows up, and Joe seems to be a magnet for trouble.  I speak here of the Joe Pickett novels of C. J. Box.  I would love it if Joe Pickett and Gabriel Allon ever teamed up to deal with international terrorists who left some dead bodies on the hunting trails of Wyoming. I was coaxed into a hunting trip by John Pendergraft who subsequently got me hooked on C. J. Box.  From the first page of the first book I read, I was totally enthralled by his writing, characters, plots, and descriptions.  Joe is a family man with a host of normal family problems and concerns.  Joe is also a game warden who would be well served if he only issued citations to folks who were fishing without licenses (excepting the former governor of his state).   But Joe always gets tangled up in some horrible crime that exceeds merely shooting an elk out of season.

My most recent Box read was Wolf Pack.  That book was a chilling read.  I began to wonder who, if anyone, would survive from Joe’s world.  As amazed as I am by Box’s Pickett novels, he has also done quite a few other books in the same murder mystery/hunt down a criminal genre with other characters, who are also living in the American West.  Before I read Wolf Pack, I read Back of Beyond.  I wonder now if it may just be Box’s best book.  And, I think I have one more book by him that I have not read.

I have managed to get hardback copies of all of the Joe Pickett novels minus one.  And I have even got an autographed book or two, but I will not be satisfied until I am standing in front of the man himself, cowboy hat and all, and getting some of my copies signed.  His latest book, Bitterroots, is on my wish list, but I don’t have it yet.

The distinctions between literary novels and escape reading can be helpful, but limited in usefulness.  I read, along with the spy and murder novels, some novels that are more “literary” and which have more thought-filled development.  Those last four words terrify me, because a novel absolutely must have an element of enjoyment to it.

Bradley Birzer mentioned a few months ago how much he enjoyed the novel Armstrong by H. W. Crocker III.  This book was published by Regnery Fiction, which is a branch of Regnery Publishing, one of the most solid publishers of conservative books.  I got the book and started reading, little by little, during my short, sleepy afternoon reading break.  After the second chapter, the book got put aside for other pressing matters and because I was not very interested.

Then one night, a few weeks ago, I picked it back up.  Started the second chapter again and was somewhat interested.  Then I went all the way back to the beginning and read–over the next week or so–the whole book.  It was delightful and a hoot.  I am not normally attracted to a novel that is described as “delightfully funny,” but I got drawn in.

To retell the story a bit, General Custer actually survives the Battle of Little Big Horn in this novel.  He then escapes from an Indian tribe and begins a series of adventures that entail a wide array of wily characters, outlaws, and odd fellows.  The story gets funnier and funnier as it goes along.  On the cover it says, “The Custer of the West Series,” so I hope that it is the first of many.

More recently, I read Lief Enger’s third novel Virgil Wander.  Several years ago, I stumbled upon a copy of his first novel Peace Like a River.  I thought it was probably a western since the cover featured a man on horseback.  Shortly after that, I was unable to sleep one night, and I picked up that book and started reading.  I love it.  Gave away copies of it.  Told people about it.  When So Brave, Young, and Handsome came out, I picked up a copy, read it, and like it, although I was not as moved as by the first book.

Last Christmas, Virgil Wander was on my want list, and it found its way under our Christmas tree.  But I held on to it for months before reading it.  When I started it, just a few weeks ago, I kept thinking that maybe Enger had bottomed out on this one.  But slowly, I began getting involved in the weird, quirky, but loveable ways of the main character Virgil Wander and his host of friends.  They are an odd bunch, just like all the rest of us.  Before I was half way through the book, I was longing each day to catch up with what was going on.  All in all, a very good and perceptive read.

I picked up the novel Fallen Land by Taylor Brown last week and read it this week.  It had two chief appealing attributes:  It was priced for a dollar at a Dollar Store and it is set in the Civil War.  I knew nothing of the book or author prior to this.  This is Brown’s first novel, and for a firster, it was very engaging.  Once again, I found my life caught up in the characters.  But this time, I was not in the Israeli intelligence community, or on the hunting trails of the west, or alongside Sheriff Armstrong (George Custer) or watching old films with Virgil Wander.  I was trying to escape from bounty hunters (who were ex-Confederate guerrilla fighters) along with a young man named Callum and a woman named Ava.  The flight was across the barrens of the lower Appalachian area and into and across the swath of burned out territory left by Sherman’s Army.  This was a good book.

I guess I will never be a real literature professor or teacher because I am still reading.  Hope to start reading A Gentleman in Moscow by Amor Towles, The New Girl by Daniel Silva, and some books by the recently deceased Herman Wouk soon.