Born and raised about six miles out from De Kalb, Texas, I have spent most all my days in small places.  De Kalb, back in those prosperous days, had a population of something over 2,000 in the city limits, but most folks lived out of town.  I did spend two years languishing in Little Rock while I attending college at the University of Arkansas at Little Rock.  During my first year of teaching, I went to Avery, Texas, which was even smaller than De Kalb.

It was while I was in Avery that I read a short novel titled I Heard the Owl Call My Name by Margaret Craven.  That novel tells the story of a dying young, inexperienced Anglican priest who is sent to a remote village in Canada to minister.  That story, with some obvious differences, beautifully resonated with me and my own experiences that year.  The priest in that story learns the culture, fears, habits, and struggling faith of the people he is called to minister to.

For the next sixteen years, I lived and worked in the rural community of Genoa, Arkansas.  I bought ten acres of land and built a log cabin on it.  That home is still the ideal in my heart and memory.  (I dream of getting that house back, but sadly wake up and remember that it burned a few years after I sold it.) Genoa School, where I taught history, was a rural school that still took a day off in November for Deer Day.

Since 2000, we have technically lived in the city limits of Texarkana, Arkansas.  We actually live on a five acre piece of land (call it a farm, if you are imaginative). There are people with cows and horses around us.  People fire guns at all times and no one notices.  We burn brush in our field and hope that the authorities don’t notice.

Since I left my parents’ home in 1976, I have been part of four different small churches.  All four of my past congregations would have fit into one of the larger churches in the area with plenty of seats left over.

The past couple of weeks, I have read Stephen Witmer’s book A Big Gospel in Small Places:  Why Ministry in Forgotten Communities Matters.  This book is published by IVP.

Let me cut and paste the answer to your question: “Who is Stephen Witmer?  Here goes:  Stephen Witmer (PhD, University of Cambridge) is the pastor of Pepperell Christian Fellowship, Massachusetts, and is an adjunct professor of New Testament at Gordon-Conwell Theological Seminary. He is also the cofounder of Small Town Summits, an organization that serves rural churches and pastors.  Witmer is the author of Revelation: a 12-Week Study, Jonah: Depths of Grace, and Eternity Changes Everything. He has written for Bible Study Magazine, Reformation 21, The Gospel Coalition, and Desiring God. He lives in Pepperell, Massachusetts,  with his wife, Emma, and their three children.

As you can see from the bio, there are some real substantive reasons for me to dislike Stephen.  First, he is from, not just the North, but New England–Maine and now Massachusetts.  Second, he has an enviable resume and academic accomplishments.  Third, he is still young.

In spite of all that, I must confess to having really enjoyed this book.  I enjoyed it because it brought to light and reinforced a great need in the churches of our day.  Many young pastor-candidates should prayerfully and carefully read this book.

Granted, most people now live in the larger cities and suburbs of America.  Granted that the greater numbers of people, resources, activities, and ministry opportunities are in the larger cities.  The flyover parts of the country are large swaths of darkness from the window of the airplane as it gets beyond the east coast and heads west.

More can be said and noted about small town people.  Happiness for many a youth growing up in the confines of small town America is seeing that city limits sign in the rear view mirror (a reference to the Mac Davis song “Happiness was Lubbock, Texas in My Rearview Mirror”).  The city lures many away.  Most never return.  Some of those who stay don’t have very happy results.

There is a mythological small town America.  Some of us unthinkingly embraced it by thinking that Mayberry, North Carolina really existed.  For me, I embraced it wholeheartedly when watching “The Waltons” on television for years and then watching them again on DVD with my children.

The Waltons went to church on Sundays, except for the dad.  They had meals together.  Every Thursday night they faced a life-threatening crisis, often tied to the Great Depression and the impending Second World War.  By the hour’s end, they had resolved the problem, finding the answers in faith, family, and traditional values.  As the show concluded, the family members called out “Good nights” to one another.

The problem is that small town America is not Walton’s Mountain from the television show.  While their lives were far from perfect, small town and country people with values rooted in the heartland are warped, struggling, failing sinners.  Some of the sin problems that are endemic in the cities of America are just as bad or worse in small communities.  Farm living and nice friendly neighborhoods do not impart grace.  (To what extent they may restrain sin depends on other factors.)

Most small community pastors are going to live and die in obscurity.  They are going to minister to a small bunch of stumbling and sometimes crazy folks.  They are not going to get rich, build a huge church, or establish a number of viable Christian institutions.  They may not even succeed as pastors (whatever that may mean).

There are enough warnings and exhortations in this book to scare many away who need to be scared away. They are given not as horror stories or “Do Not Enter” signs, but as check lists.  One should never enter the pastorate with unrealistic rosy expectations.  Optimism yes;  extreme idealism, no.

Pastors, students aiming at ministry, and church planters:  Read this book prayerfully and along with others with whom you can discuss it.

But what about the rest of us?  I mean those of us who are not pastors, not aiming to be church leaders, and not residing along the backwoods highways and byways of America?

This book still has lots to say.  First of all, we need to know about the greater challenges facing American Christians.  Millions of people live outside the major population centers.  They are not all “Good Country People” (to borrow from the title of Flannery O’Connor’s ironic story).  Second, the oft repeated idea that the faith was originally and strategically planted in the major cities of the Roman Empire is misleading.  There might be better reasons for planting churches in Dallas, Texas and Little Rock, Arkansas than Old Washington, Arkansas, but any idea that capturing the cities first is THE Biblical strategy is strongly refuted in this book.  Third, many of us live in areas that are not exactly rural or small town, but not exactly at the center of culture and modernity.  My city of Texarkana is a small city.  I live on five acres of land on the edge of the city limits.  I go to a small church.  Most churches are small churches.  Some of the best ones are very small.  So, the book applies here as well.

God’s blessings on this book and author. 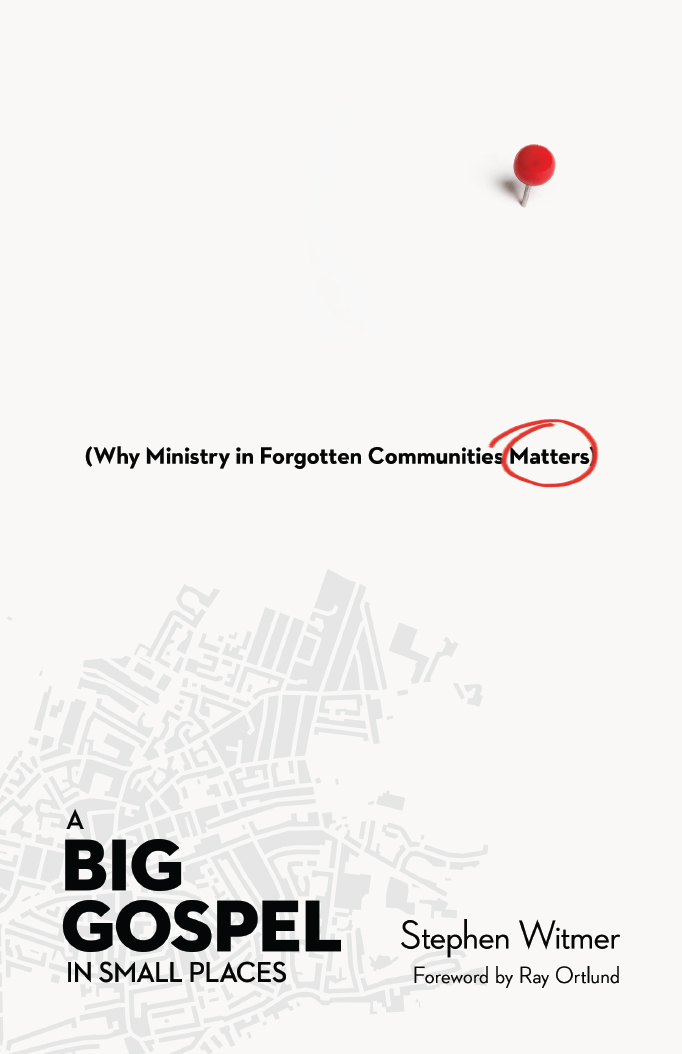