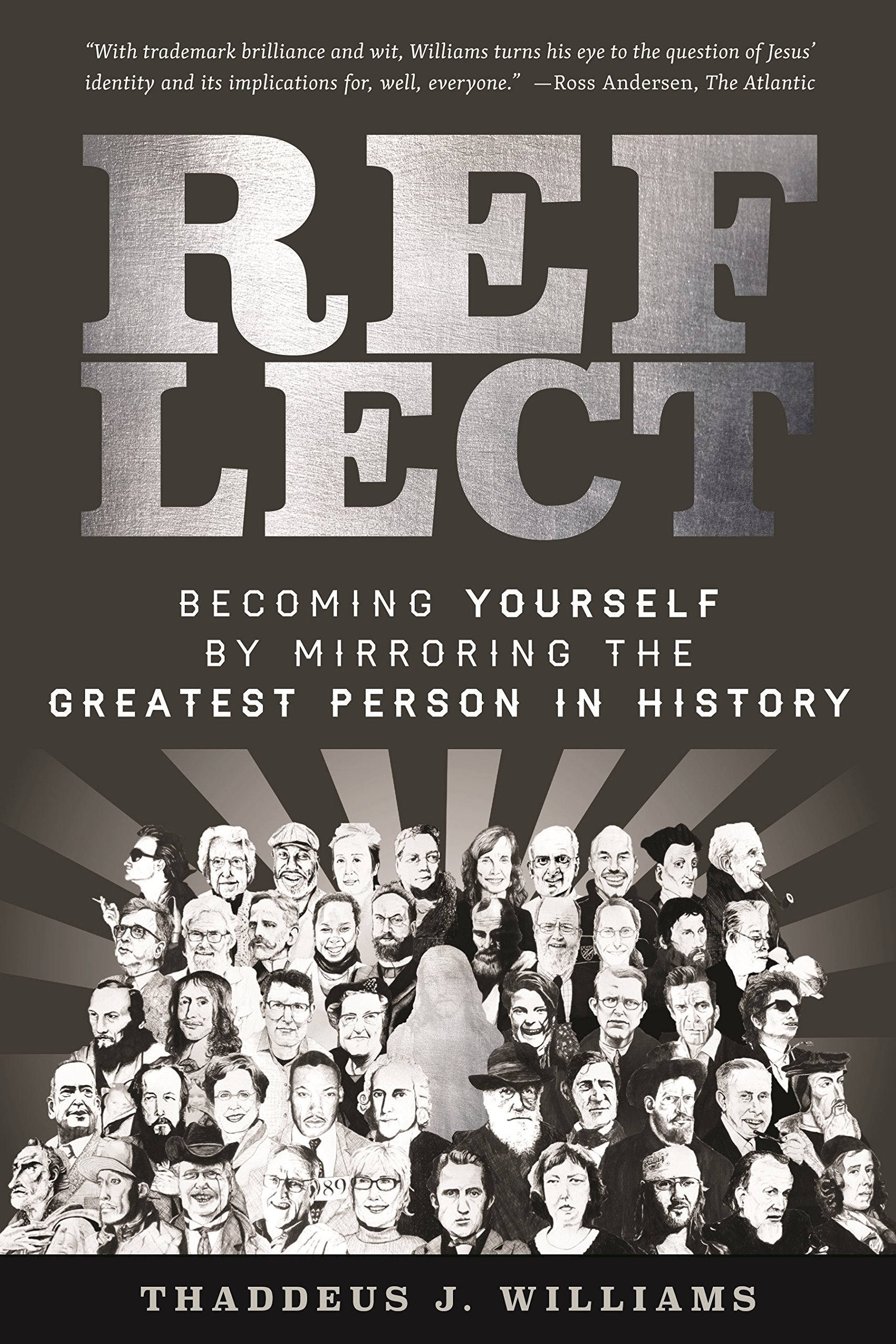 Reflect: Becoming Yourself By Mirroring the Greatest Person in History by Thaddeus J. Williams is published by Weaver Book Company.

First, let’s deal with my anger issues.  I did not know this book existed, nor did I know that Thaddeus Williams existed until a month or two ago. Here I am, slogging my way through this world, slipping and falling, sliding and failing, distracted by one worldly pursuit after another, wallowing in near illiteracy, and all the while, this book was out there.  I have already rebuked two friends, Andrew Sandlin and Brian Mattson, for writing glowing blurbs for this book, but not informing me of how good it is.

Related to all this, if Thaddeus Williams was really concerned with us mirroring Jesus, he should have personally flown across the country and hand delivered this book to me.  The fact that he did (or does) not know me is irrelevant.  This is a book I needed.  If it could be put in liquid form, I would have an IV attached to my arm and have the book fed to me that way.

Third, the cover art itself is worth the price of the book, especially for those of us who are always wanting to know who’s who in the world of Christian thinking and living.  By the way, inside the book is a numbered list identifying the 48 distinguished contributors to the book.  (Almost that many key Christian leaders wrote favorable blubs for the book.)

Where else will you see Bonhoeffer and Johnny Cash side by side?  Or Lecrae the rapper in between Augustine and G. K. Chesterton?  Or Charles Darwin looking rather uncomfortable because he is next to Jonathan Edwards?  This isn’t just clever cover art.  Each of the theologians, Christian authors, musicians, and cultural figures are quoted in the book with their own words being used to buttress arguments about following the life, teachings, and work of Jesus Christ.

Some, but not all of the supporting cast in this book about Jesus Christ.

The title Reflect is itself full of meaning.  I must admit that as a book reviewer (my idea of a sports activity), I am always pressed to read and finish rather than read and reflect.  But we all have our urgent tyrannies.  Sometimes the words, “Nice sermon, pastor” (or I prefer to say, “Better luck next time”) is all of our response or reflection on a Sunday sermon.  After all, the sermon is over at noon or slightly past that and the call of the stomach for food is all consuming.  We all live too fast and furiously too much of the time and don’t take time to reflect on the Christian life.

This book is not a remaking of the Charles Sheldon’s somewhat drippy book In His Steps which was premised on the statement of “What Would Jesus Do?”  There is something to be said about the recurring WWJD idea or, now what we would call a meme.  But WWJD has to be approached with discernment.  Don’t come after me with a whip and turn over my book table where I am offering copies of this book in the church foyer.

Thinking about Jesus brings us to the R in the word Reflect and to the first point of the book.  Reason: Mirroring the Profound Thinking of Jesus.  I probably have a hundred books related to Christian thinking.  From Harry Blamires’ The Christian Mind to Herman Dooyeweerd A New Critique of Theoretical Thought to Augustine’s On Christian Doctrine to John Piper’s Think, I have been accumulating, reading, and using books showing how Christians ought to think.  After all, I am in the thinking business since I am a teacher.

What makes Williams’ chapter interesting (besides the fact that it is really interesting) is that his book doesn’t approach Christian thought and reasoning as an add on, or later chapter, in the process of following Christ.  He begins with this and then shows example after example of how Jesus won debates by using two successful keys:  Being right and using right reasoning.  After all, He could have turned his opposition into toads. (See the movie Oh Brother, Where Art Thou? regarding the dangers here.)

The E in Reflect represent Emote:  Mirroring the Just Sentiments of Jesus.  I am enough of a crusty, old-time Calvinist to shudder when I am around too much emoting.  Modern Christianity, hand in hand with modern life in general, “thinks” emotion is thought, that feelings are doctrines, that being all heart is following Jesus, truth, and the American way.  The Christian doctrine of emotion, even that phrase sounds weird to me, is not to be Stoically cold and calculating to every event.  Jesus was an emotional man.  Being fully man and fully God, He is an emotional Person in the Triune Emotional Godhead.  When Williams talks about “outrage, passion, and joy,” he is describing aspects of the life of Jesus.  Theologians such as Jonathan Edwards and pastors such as Samuel Rutherford could write things that were downright embarrassing because they were so emotional in their devotion to Jesus.

F stands for Flip:  Mirroring the Upside-Down Action of Jesus.  As the criticism was made later that the apostles were turning the world upside-down by their teachings (Acts 17:6), so this could be made about Jesus.  Maybe we have read and heard the Bible stories too many times (let the reader understand), so we often are too used to, too comfortable with Jesus’ flipping situations, teachings, ideas, etc.

L stands for Love:  Mirroring the Radical Relationability of Jesus.  Once again, we are so accustomed to the use of the word “love” in a Jesus and church context that we forget how radical and challenging this is.

E stands for Elevate:  Mirroring the Saving Grace of Jesus.  I was so thankful for this chapter.  Here is why:  Basically, I believe in salvation by works plus grace.  Basically, I believe that while I might be a C- Christian, I am passing and will get promoted to heaven.  Grace always hits me hard and right between the eyes.  It corrects what is has already corrected a million times in my life and reinforces to me that Jesus saves sinners.  Saves, not just helps; saves, not just instructs; saves, not just supplements my own efforts.

Williams says, “To think, feel, act, and love in a Jesus-reflecting way is not challenging; IT IS IMPOSSIBLE. Anyone who thinks otherwise has either laughingly overestimated himself, or seriously underestimated Jesus. The distance between him and us is infinite. Thankfully, there is grace.”

C stands for Create:  Mirroring the Artistic Genius of Jesus.  This is the chapter (not to be read by skipping ahead) that I commend to all my artistic friends and family members.  Poets, musicians, artists, designers, and writers:  Take note how we as Christians are to follow Jesus as our Master Artist.  For a time, there were tables, chairs, or other items that Jesus the Carpenter had made.  No doubt these artistic works were well done, but Jesus the Artist, Designer, Author, Carpenter, Painter left us His magnum opus:  An empty tomb.  All the great paintings, all the fine poetry, and all the moving songs (“He’s Alive” by Dolly Parton is my favorite) and then realize that they are all covers, imitations, and copies of the original:  Jesus’ Resurrection.

T stands for Transform:  Mirroring Jesus in All of Life.  Transformation is an underused and overwhelming word in the Christian life.  As a Christian who uses the word “Reformed” to describe my theology, I really need to be a Transformed Christian more and more.  It is not a one time action, but a life-long process.

Since I have given all these spoilers, is there any reason now to read this book?  As my pastor Jared Gibson often says, “Are you crazy?” (Or the milder version, “Are you kidding?”).

Read, reflect, read again, buy copies and give them to those that need to read and reflect. 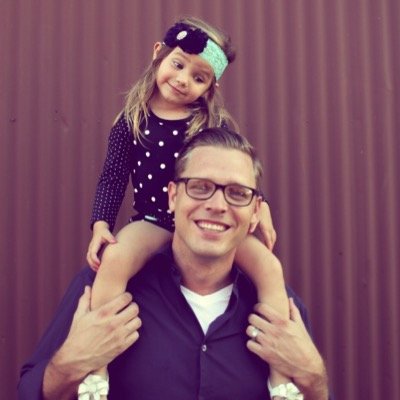